A delicious puff pastry confection filled with almond frangipane. This recipe for vegan king cake (galette des rois) is a keeper. Serve it warm, whilst the pastry is still beautifully crisp and flaky and you’ll wonder why you’ve never made this super easy bake before. 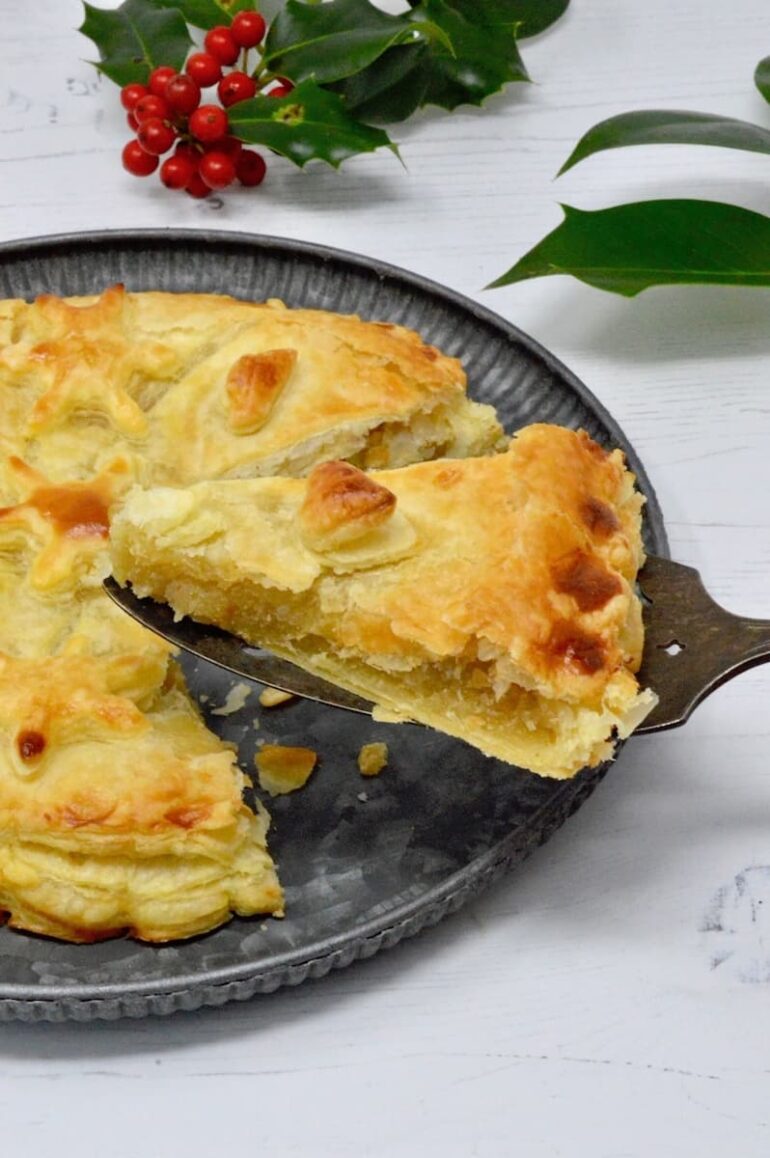 What Is Galette des Rois?

In France there are two types of King cake. One is made from leavened dough, the other is made from puff pastry. The South of France favours the yeasted variety, but in the North and Paris in particular you’ll find the pastry version gracing the windows of patisseries during January. That is the version you’ll find in this recipe.

The pastry version consists of two layers of puff pastry filled with a mouthwatering almond frangipane. Traditionally, the edge of the cake is scalloped and the top is scored with a spiral or zigzag pattern.

A fève is hidden inside the galette. Whoever gets it is considered to be the king (or queen) for the day. Originally the fève was a fava bean (broad bean), which is what fève actually means. It’s used to represent the baby Jesus. These days it tends to be a porcelain figurine hidden inside or, quite often, an almond.

Although we generally associate king cake with christianity, it was in fact the Romans who started the tradition during Saturnalia. This was a public holiday to honour the god Saturn, with plenty of feasting, gifting and merrymaking for all. Saturnalia covers the winter solstice in December and is the precursor to our Christmas celebrations.

If you like almonds and the flavour of marzipan, you’re going to love galette des rois. It reminds me most of an almond croissant. If you’re anything like me, you find these irresistible. The ratio of filling to pastry is much higher though and the gateau des rois dough is not a yeasted one. It’s a crunchy, flaky puff pastry.

Epiphany also known as Three Kings Day is a Christian feast day which always falls on the 6th of January. According to tradition, it’s the date that the three kings (Melchior, Caspar and Balthazar), also known as wise men or magi, visited the baby Jesus and presented him with the gifts of gold, frankincense and myrrh. Some christians also celebrate it as the day that John the Baptist baptised Jesus.

The word epiphany is derived from a Greek word which means to reveal. Thus Epiphany is the day that the baby Jesus was revealed to the world.

In some Christian cultures, Epiphany is celebrated as Christmas instead of the 25th of December.

It’s not the same as twelfth night, however, which is Epiphany Eve and falls on the 5th of January. According to tradition, this is the night that the wise men arrived in Bethlehem. If you’d like to celebrate this with cake, try my twelfth night cakes with lemon and marzipan.

So to the gâteau itself. Traditionally king cake is made with buttery puff pastry, eggs, sugar and almonds. It’s delicious. My vegan version is equally delicious even though I’ve made it without butter or eggs. It’s also really quick and easy to prepare. Assuming, that is, that you buy the puff pastry rather than make it yourself.

If you buy a puff pastry sheet, it’s even easier.

For the vegan frangipane filling, I’ve swapped the butter for extra virgin olive oil and the eggs for aquafaba. Aquafaba is the seemingly miracle water leftover from cooking chickpeas and other beans. Just drain the liquid from a tin of chickpeas and you have aquafaba. It has very similar properties to egg whites and it makes a good egg substitute in many bakes.

Take a look at my brown sugar aquafaba meringues if you don’t believe me.

All you need to do is mix the frangipane ingredients together and you have a most delicious almond cream filling. I’ve added some grated orange zest for additional flavour, but traditionally it’s just almonds and maybe a little rum.

This vegan galette des rois is quite rich, so a little goes a long way. My recipe is for a twenty centimetre (eight inch) cake which gives eight modest slices. But if you think the slices are too small, you can always have a second one. Or just make a larger cake.

For This Vegan King Cake You Will Need:

Although I’ve divided the process into nine easy steps, there are really only two main ones. First make the vegan almond frangipane, then prepare the pastry.

Traditionally you cream butter and sugar together to make frangipane. Creaming doesn’t really work with oil, so use a whisk to thoroughly combine the sugar and olive oil. Use a medium sized mixing bowl for this.

Add the aquafaba, almond extract and rum, if using. Also add the salt at this point to ensure it dissolves and gets well distributed. Whisk everything together thoroughly.

Add the arrowroot or cornstarch at this point and whisk again until the mixture has thickened slightly and there are no lumps remaining.

Use a spoon or spatula to stir in the ground almonds and orange zest, if using. Mix into a paste, then set aside.

Using a round plate or tin as a guide, cut out two 20 cm (8 inch) circles from the pastry sheet with a sharp knife.

If you buy a 320 gram ready rolled sheet of vegan puff pastry, the sheet isn’t quite big enough to get two decent sized circles out of it. This means you’ll need to roll it out lengthways to stretch it a bit. It’s very easy to do. Just keep the sheet on the paper and run a rolling pin over it a few times. And don’t worry about the pastry becoming too thin, the sheets are usually quite thick.

Keeping one pastry circle on the original pastry paper, spread the frangipane over it, leaving a 1 ½ cm (½ inch) gap around the edges. Try and get as even a layer as possible.

Peel the second pastry circle from the paper and place it over the frangipane. Use your fingers to seal the two circles together. Make sure you press down firmly, so that the filling cannot escape.

In order to create the traditional scalloped edge, press down with your first and middle fingers and use a knife to cut into the gaps. See the image below.

Using a sharp knife, lightly score the top of the pastry to look like the spokes of a wheel or use a zig zag pattern.

Use some of the leftover scraps to make cut out shapes for the top. It’s not in the least bit traditional, but I like the effect.

Gather together all remaining scraps, roll into a rectangle and make cinnamon swirls with them. Delicious.

Mix a little plant milk with some maple syrup and use this to glaze the top of the cake. It’s not as effective as egg yolk, but it makes quite a good substitute.

Cut the original paper that the galette is sitting on so that it fits on a baking tray. Transfer the whole thing to the baking tray.

Pop the galette into the top half of the oven and bake for approximately thirty minutes. If it’s not risen, flaky and golden brown, return it to the oven for a further five minutes.

Place on a wire rack to cool a little. When the galette is still warm, but no longer hot, peel off the paper, transfer to a plate, slice and serve.

Vegan King Cake: Make It Your Own

The orange zest I’ve used is optional. For a more traditional King cake, flavour it with almond extract only. I’ve gone for a fairly subtle almond approach. If you like a strong almond flavour, go ahead and add a further quarter teaspoon to the mix.

Many king cakes contain rum, but not all. I’ve only used a tiny amount in this recipe, but feel free to omit it altogether or go for a tablespoon rather than a teaspoon.

For a lemony zing, swap the orange zest in this recipe for lemon zest.

Thanks for visiting Tin and Thyme. If you make this vegan galette des rois, I’d love to hear about it in the comments below. And do please rate the recipe. Have you any top tips? Do share photos on social media too and use the hashtag #tinandthyme, so I can spot them.

If you’d like more pastry recipes, follow the link and you’ll find I have quite a lot of them. All delicious and nutritious, of course.

I cut out shapes from some of the pastry scraps and used them to decorate the top. This is not in the least bit traditional though.It’s quite rich, so a little goes a long way. But if you think the slices are too small, you can always have a second one.Please note: calories and other nutritional information are per serving. They’re approximate and will depend on exact ingredients used.