Home » Reviews » Eating Out, Travel and Events » Events » Mastering the Art of Sushi with Yo! Sushi
Share on TwitterShare on FacebookShare on PinterestShare on LinkedInShare on E-mail 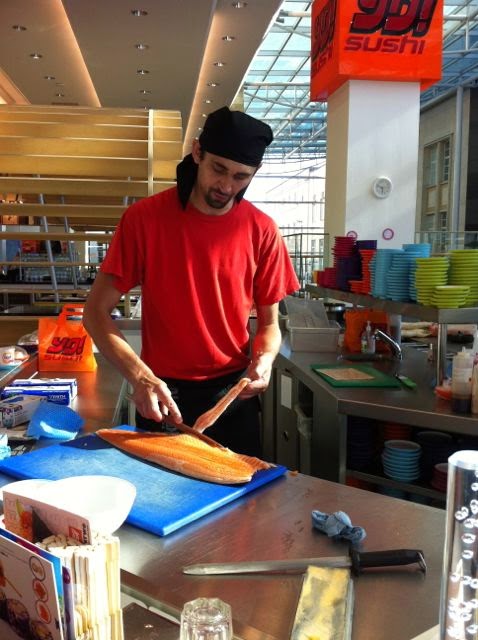 When I say Yo! Sushi, who thinks about chocolate? No-one. Fair enough. If chocolate is what you’re after, for once you’ve come to the wrong place. I really meant to take some chocolate along with me for some fusion food chocolate sushi, but rather stupidly I forgot. I can’t say as I was disappointed or that it was missed; I had a fabulous time and ate far more sushi than was good for me.

A bunch of South West bloggers (glam fashion bloggers as well as the foodie crowd) met up early one evening last month at Yo! Sushi in Plymouth. Situated at the main entrance to Drake’s Circus, it’s hard to miss, but I’d never stopped there before. Our mission was to learn how to make sushi – obviously. We had our very own Sushi Master to guide us, the most marvellous  Mazz. Our session was jam packed with plenty to eat along the way. We got to take a tray of sushi home with us too, along with the recipes, a bamboo rolling mat, a certificate and a few other bits and pieces. It’s a great activity to do with a bunch of friends, but it’s fine to go alone too. At £30 a person or £50 for two, I thought this was good value for money.

Sushi has a rather special place in my life. It was the first meal CT ever made me and I was mighty impressed, both with the sushi that I’d never eaten before and with CT’s skill in preparing it. Like the rest of the British nation, I took to it with enthusiasm. I even had a go at making it myself once, but was singularly inept. So I was really looking forward to learning a few tips and tricks.

The staff were particularly friendly and helpful and we were offered a drink as soon as we arrived. I opted for a mug of Japanese Green Tea that was no sooner finished before another one turned up in its place. It was quite delicious and just what was needed to keep us hydrated with all the hard work – oh wait a minute, did I say work? I meant fun.

Mazz made it all look astonishingly easy, but he was a great teacher and had plenty of the looked for tips and tricks to pass on. He started off with preparing a massive salmon thus proving he was a Master knife wielder as well as sushi maker. I tuned out at this point, but he went into a lot of detail and the others all seemed to get a lot out of it. Being a vegetarian was not a problem at all however; I was well catered for. Some of the sushi we were making was vegetarian anyway and when there was fish to be eaten, Mazz made me my own super delicious vegetarian versions with egg, avocado, tofu or all three. After an initial demo, we all had a go at making maki, which has a filling of cucumber and sesame seeds. We’d been taught well and all managed to produce some reasonably good looking sushi.

Watching Mazz make mini ISO, or inside out sushi as it’s known, was quite something and the results were spectacular I thought. I’d not come across this technique before, but the rice is on the outside and the nori (seaweed) on the inside. With a filling of tofu, omelette and cucumber and a dusting of Japanese chilli powder on the outside, these were absolutely scrumptious.

Hand rolls, ISOs, Gunkan and Nigiri all flew from Mazz’s hand and were subsequently demolished by us. My favourite was Futomaki which was a standard sushi roll with a filling of avocado, cucumber, omelette, radish pickle, carrots and mayonnaise. In truth, everything I tasted was delicious and it all looked stylish, neat and attractive, the way so many Japanese creations do. I took some of the fishy ones home in my bento box for CT who was very glad that I did.

The most useful tips I took away with me were:

Many thanks to Jane of The Hedge Combers for organising the event, to Yo! Sushi for making it happen and to Mazz for his showmanship and good nature.

Do check out the other write-ups over at: