Traditional British pancakes are different to American style ones. They’re similar to French crêpes in that they’re large and thin with crispy edges. Add your topping of choice and then fold or roll them up. Wholemeal pancakes taste just as good if not better than those made with plain flour. 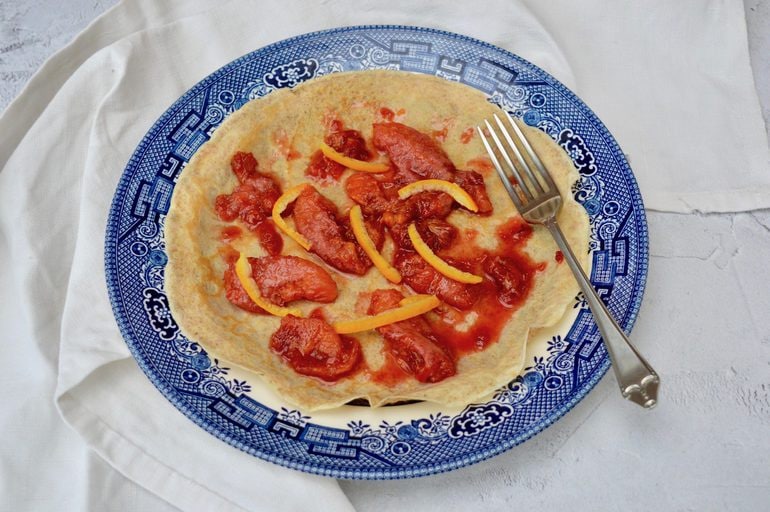 The world loves a pancake and there are many different kinds. In Europe they’re traditionally eaten on Shrove Tuesday, known as Mardi Gras in France. Nowadays we tend to refer to this as Pancake Day here in the UK. Of course, we can eat pancakes on whatever day of the year we like and we frequently do. But it’s almost obligatory to eat them on Pancake Day.

Why Eat Pancakes on Shrove Tuesday?

Shrove Tuesday falls in February and is the day before Ash Wednesday, which is the first day of Lent. The idea is to clear the house of all the fattening foods, such as eggs, milk and sugar before the forty day lenten fast begins. The tradition of eating pancakes continues, whether or not we observe Lent.

But Shrove Tuesday didn’t originally have anything to do with pancakes. It comes from the Christian practice to ‘shrive’, or do penance for one’s sins before Lent.

Pancake Day falls on the 25th of February this year.

I’ve only ever made wholemeal pancakes. This is mostly because they’re delicious and easy to prepare. But they’re also much better for you as the wholemeal flour contains fibre and is rich in vitamins and minerals. I usually, but not always, use wholemeal spelt flour.

And so to the method. Start by sieving the flour into a large bowl. I tend to throw any extra large bits of bran left in the sieve into the compost, but you can just tip them into the bowl with the flour if you prefer. Add the salt.

Make a well in the flour and break in the eggs. Stir from the inside out, adding the milk as you go until everything is well  mixed. Stir in the oil or melted butter. Rest the batter.

Heat a pan over a moderate heat and brush with melted butter or oil. I always use butter for frying pancakes. It just tastes better.

Pour in just enough batter to cover the bottom of the pan. You’ll need to swirl it around to cover it completely. But be careful, as you only need a thin layer.

Leave to cook for about three minutes. When it’s done, it should come loose when you give the pan a good shake. Either turn the pancake over with a wide spatula or toss it in the air. Just make sure you catch it. I highly recommend the first method. It will only need around thirty seconds to cook on the second side.

Depending on how nonstick your pan is, you may or may not need to brush it with butter or oil again. I always do, just to be on the safe side. Repeat the process.

The pancake batter doesn’t take long to make, but it’s best if it stands for thirty minutes before you actually start making the pancakes. This allows the glutens to develop which makes the batter more stable and the pancakes lighter. You don’t have to rest the batter before cooking, but it helps to stop the pancakes tearing or breaking up if you do.

How many pancakes you get will depend on the size of the pan you use. For eight pancakes, use a standard sized frying pan measuring around 24-26 cm. I’m not sure why but measurements for frying pans are taken on the diameter of the upper rim. Doesn’t really make much sense to me as it’s the bottom of the pan where you do the cooking. Mine measures 18cm, (7″) on the bottom.

The first side will look very different to the second side. So you can take your pick as to which side you want to show off.

Although it doesn’t take long to mix the batter, it will take a while to cook the pancakes as you have to do them one by one. It should take about half an hour to cook all eight pancakes. As soon as one is done, put it on a plate in a warm oven whilst you get on with the next one. Place the next one directly on top of the first one and continue until you’ve used up all the batter. You can then serve the pancakes all together.

Alternatively, serve each one as you cook them and let the recipient put their toppings on themselves.

Make Your Wholemeal Pancakes in a Blender

Although it’s really easy to make wholemeal pancakes by hand, you might find it even easier and faster to use a blender. There’s less washing up too. Just throw everything into the jug and blitz for thirty seconds or so. It’s still better to let the batter rest if you can though.

My glass jugged Froothie Evolve* is just brilliant. It can handle pancakes and pretty much anything else you care to throw at it. If you’re interested in finding out more about this amazing power blender, here’s a link to my Froothie Evolve review.

Can You Freeze Wholemeal Pancakes?

Pancakes will keep in the fridge for a few days, but they also freeze really well. Just line a baking tray with greaseproof paper. Lay the pancakes on it individually and freeze for an hour or until fully frozen. Then stack together and place inside a freezer bag. Best eaten within two months.

When you want to use them, defrost, then heat each one briefly in a hot nonstick frying pan.

What’s The Difference Between American, French and British Pancakes?

American pancakes are very similar to drop scones or Scotch pancakes. They’re small, thick and fluffy and are usually served for breakfast. You need a raising agent to make them and they usually contain sugar in the batter.

Called crêpes in France, these pancakes are large, thin and flat. They contain no sugar, nor raising agent so are very different to American ones. They’re often made with buckwheat flour, rather than wheat flour. This is particularly true in Brittany where they’re sometimes called galettes.

As stated at the beginning British pancakes are similar to French crêpes, but they’re not as large nor quite as fine and lacy. They’re crispy around the edges, but pliable and quite substantial which makes them ideal for rolling up or folding into halves or even quarters. They’re not, traditionally eaten for breakfast, but are generally made for tea, dessert or as part of the evening meal. And most people would expect to get two pancakes.

Traditionally we Brits like to top our pancakes with a sprinkling of sugar and a squeeze of lemon. We roll them up tight, then tuck into them with a knife and fork or eat with our hands. But, good as this is, don’t feel it’s the only way to go.

The possibilities for fillings and toppings are endless and it’s not all about the sweet stuff either. Savoury pancakes are just as good. When I was growing up, we’d often have savoury pancakes for our main course followed by sugar and lemon ones for pudding.

I’d love to know what your favourite fillings are. But meanwhile here are a few suggestions for you.

Thanks for visiting Tin and Thyme. If you make these wholemeal pancakes, I’d love to hear about it in the comments below. Do share photos on social media too and use the hashtag #tinandthyme, so I can spot them. And let us know what your favourite toppings are.

Sticky Blood Orange (for one)

Aim for two pancakes per person, though this will obviously depend on what else, if anything is going to be eaten.
Scale the sticky blood oranges up to the number of people who want them on their pancakes. It's one orange per pancake.
You don't have to rest the batter for 30 minutes before cooking, but it helps to stop the pancakes tearing or breaking up if you do. It allows the glutens to develop which hold the batter together.
Although it's really easy to make wholemeal pancakes by hand, you might find it even easier and faster to use a blender. There's less washing up too. Just throw everything into the jug and blitz for thirty seconds or so. It's still better to let the batter rest if you can though.
Please note: calories and other nutritional information are per pancake. They're approximate and will depend on exact ingredients used. Sticky blood orange not included.

I’m sharing these wholemeal pancakes with A Strong Coffee for #CookBlogShare.

This post contains affiliate links to Froothie Optimum products*. Links are marked with an *. If you buy through a link it won’t cost you any more, but I’ll get a small commission. Thanks to my readers for supporting the brands and organisations that help to keep Tin and Thyme blithe and blogging.