It’s Pancake Day, also known as Shrove Tuesday or Mardi Gras, which is just a fancy way of saying Fat Tuesday. What could be more fattening than pancakes? Well chocolate and cream pancakes filled with 100% cacao, honey and clotted cream? 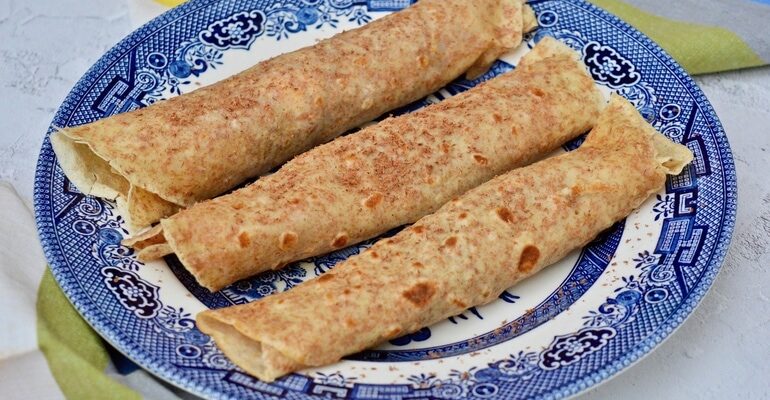 I have a block of Willie’s Venezuelan Black 100% cacao which has been lurking in the cupboard for some time now. I say lurking, because I’ve been feeling rather shame faced about my uncertainty as to what to do with it. However, on the train home this evening I had a bright idea – pancakes! Grating some of Willie’s cocoa into and on top of the pancakes would make a change to the traditional lemon and sugar. When I got home, CT reminded me that we had some clotted cream in the fridge – ooohhh.

So, CT made the wholemeal pancakes and I drizzled some honey over the top. I then grated on a wee bit of cacao and finished them off with a healthy dollop of organic Cornish Clotted Cream. All I then had to do was roll them up and grate on a bit more cocoa. Venezuelan Black meets Cornish White CT quipped as we wolfed them down.

These chocolate and cream pancakes were a heavenly match of bitter black and creamy white. I hadn’t had Willie’s cocoa before and boy was it powerful. It says 100% on the packet and I believe it. A little goes a very long way, which is just as well as this is a gourmet product with a price to match.

You don’t have to rest the batter for 30 minutes before cooking, but it helps to stop the pancakes tearing or breaking up if you do. It allows the glutens to develop which hold the batter together.

Since writing this recipe, I’ve used Willie’s Cacao a number of times. I find it really handy to have a block in the cupboard ready to grate over dishes when a dusting of chocolate is called for.

Thanks for visiting Tin and Thyme. If you make these chocolate and cream pancakes or a variation of them, I’d love to hear about it in the comments below. Do share photos on social media too and use the hashtag #tinandthyme, so I can spot them.

Chocolate and Cream Pancakes – The Recipe

You don't have to rest the batter for 30 minutes before cooking, but it helps to stop the pancakes tearing or breaking up if you do. It allows the glutens to develop which hold the batter together.
Please note: calories and other nutritional information are per serving. They're approximate and will depend on exact ingredients used.