Roasted aubergines, chickpeas and tomatoes flavoured with Middle Eastern spices and dressed with flaxseed oil and lemon juice. All served on a bed of cooked barley. Why not ring the changes and try this vegan barley bowl? 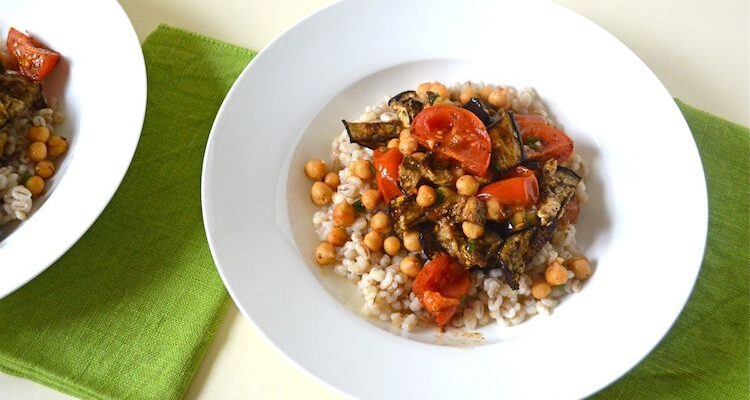 Barley is a much underrated grain. It grows well in the UK, it’s easy to cook, has a nice nutty flavour and is highly nutritious. Traditionally, it’s used in soups, but I’ve been using it more and more these days as the main grain in our meals. This dish is a simple meal of whole grain barley topped with a combination of spiced aubergine, chickpeas and tomatoes.

I was wondering what to do with the aubergine I received in my Spanish fruit and veg box. My first thought was to make the aubergine dip that turned me into being a bit iffy about aubergines to actually liking them.

Then I spotted a Mary Berry recipe for Middle Eastern aubergine and chickpea salad and decided I could adapt it to make something similar. Only mine was to be a main meal and a warm dish rather than a cold one.

It all panned out very nicely and I enjoyed the aubergine part just as much as the rest. The different flavours and textures worked really well with the barley. CT said it was so good, he thought we should have it again and soon. Served warm rather than hot and with seasonal ingredients, this barley bowl would make a lovely summer meal, ideal for alfresco dining.

Show Me Your Barley Bowl

Thanks for visiting Tin and Thyme. If you make this barley bowl with spiced aubergines, chickpeas and tomatoes, I’d love to hear about it in the comments below or via social media. Do share photos on your preferred social media site and use the hashtag #tinandthyme, so I can spot them.

If you’d like to see more recipes for meals in a bowl, follow the link and you’ll find I have a few of them. All delicious, of course.

Adapted from Foolproof Cooking by Mary Berry.Please note: calories and other nutritional information are per serving. They’re approximate and will depend on serving size and exact ingredients used.

I’m sending this barley bowl off to Jac at Tinned Tomatoes for Meat Free Mondays.