Two recipes in one. First off there’s a zingy chill lime buttered corn on the cob. Perfect for a tasty starter or side dish. Then there’s broccoli cauliflower cheese. Who can resist? Use frozen vegetables for a quick and nutritious meal or fresh for a particularly tasty one. 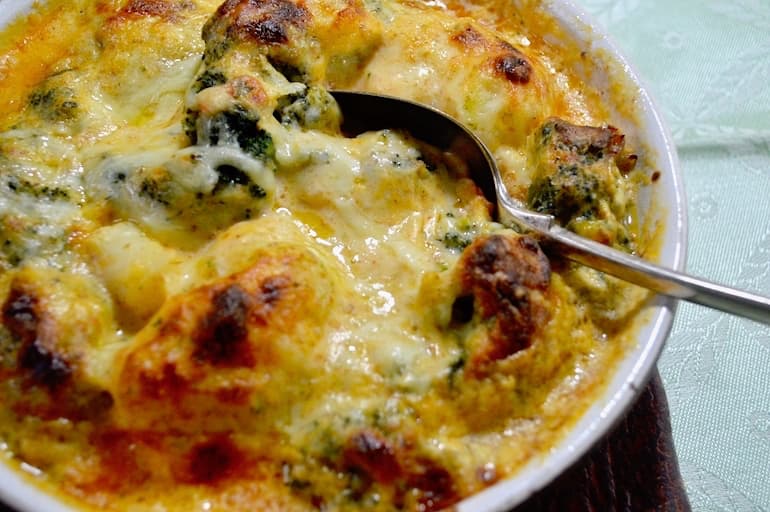 When I was challenged by Iceland to make a two course meal for under £10, I went one better and created a three course offering instead. Broccoli cauliflower cheese was the main event. This was served with sweet potato fries for colour, contrast and carbs.

We started with colourful corn on the cob smothered with zesty chilli lime butter and we finished with a very indulgent chocolate ice-cream. National Vegetarian Week seems like a very good time to showcase it all.

The Power of Frozen

My aim was to make a filling, healthy and tasty meal for four people for under £10. As there were only two of us, we had half on the night I made it and the rest the following night. The broccoli cauliflower cheese reheated in the oven perfectly and there were plenty of sweet potato fries to accompany it. The sweetcorn was so good, we rather greedily ate it all the first night, but to make up for this, the ice cream lasted us three nights.

Of course, the majority of the meal was frozen food. Frozen food is a great way of preserving the nutrients in food as well as providing us with out of season ingredients that haven’t necessarily been grown on the other side of the world – the #PowerofFrozen.

As I stated in my last Iceland post, I was pleasantly surprised to see the range of vegetables on offer when I visited our nearest shop. This time there was no kale, but there were bags of broccoli, corn on the cob and brussels sprouts, cauliflower and mixed broccoli and cauliflower. As you’ve already noted, I decided to go for the latter.

Value for money is a key concept for Iceland and I was astonished once again at just how many good quality items can be bought for £10. As well as the frozen veg, I bought a block of cheddar cheese and some good Irish butter.

Three Course Meal for Four for Less Than £10

The most expensive part of the meal was the Ben & Jerry’s chocolate fudge brownie ice cream. CT and I are both suckers for Ben & Jerry’s and a bit of luxury at the end of a meal is no bad thing. The tub I bought had a bonus 50% extra, hence managing to stretch it out over three nights.

The only additions I had to provide was a little flour, some milk, spice and a lime. This was easily made up for by the cheese, butter and ice cream left over from making my broccoli cauliflower cheese. I calculated the cost of the meal to be £7.36 plus 64p for the extras making a grand total of £8. Even if you went wild and ate all of the ice-cream, it still comes in under the £10 limit.

As all of the vegetables were ready prepared, it made for a quick and easy meal as well as a delicious one. Always a bonus on a week night.

We found the leftover butter was very nice spread on toast the next day. The broccoli cauliflower cheese with my addition of smoked paprika made a nice change from a plain old cauliflower cheese and it went very nicely with the sweet potato fries. The ice cream speaks for itself.

Can You Use Fresh Veg Instead of Frozen?

You can, can, of course, use fresh ingredients instead of frozen. Just boil some cauliflower and broccoli florets lightly in a little salted water. Five minutes should do the trick. There’s no need to put them in the oven before adding the cheese sauce as you do for the frozen florets though.

As for the corn cobs, the recipe is just the same, except you may need to peel the husks off of the corn first.

Thanks for visiting Tin and Thyme. If you make this broccoli cauliflower cheese or the lime buttered corn, I’d love to hear about it in the comments below. And do please rate the recipe. Have you any top tips? Do share photos on social media too and use the hashtag #tinandthyme, so I can spot them.

If you’d like more simple dinner recipes, follow the link and you’ll find I have quite a lot of them. All delicious, of course.

Serve the broccoli cauliflower cheese with sweet potato fries which can be cooked in the oven at the same time.Please note: calories and other nutritional information are per serving. They’re approximate and will depend on exact ingredients used.

I was commissioned by Iceland to create a two course meal using some of their products. I was not expected to write a positive review and all opinions are, as always, my own.

Previous Post: « Chocolate Whisky Cakes and a Book Shop Special
Next Post: The World of the Happy Pear – Review and Giveaway #76 »