Do you like gooseberries? This honey and gooseberry upside-down cake is a fabulous recipe to use them in. You get all of that lovely gooseberry flavour with the addition of warm aromatic honey. It’s a super easy cake to make requiring one pan to prepare the ingredients and one tin to cook it in. Serve it warm from the oven for dessert with custard or cream, or cold for afternoon tea or even elevenses. 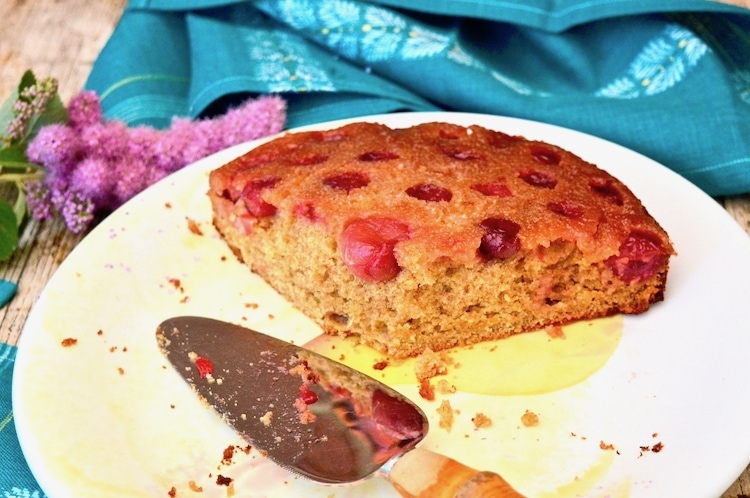 Britain is blessed with the variety of its summer berries. Gooseberries (Ribes uva-crispa) are one of these and are generally ready for harvest in July. They’re easy to grow, although care needs to be taken when picking as the bushes are thorny. And luckily, they fair particularly well in the British climate. Sadly, they’ve fallen out of favour in recent years, so they’re not as easy to find as they used to be. Nevertheless, lots of people grow their own and I’ve seen them on some supermarket shelves.

Did you know there are hundreds of varieties of gooseberries? There are tart ones for cooking and sweet dessert ones that are delicious raw. And they come in a host of colours. I’ve seen green, yellow, pink, red and purple. Gooseberries can be used in both sweet and savoury dishes, though sweet ones are more common.

Although we Brits think of gooseberries as a very British fruit, they’ve only grown here since the mid 1500s. They actually originate from southern Europe, north Africa and Asia.

Gooseberry bushes are said to fruit for about twenty years, but my mother still gets gooseberries on her fifty year old bushes. It must be something to do with the Cornish weather. We’ve just taken on a new allotment, which is a bit of a scary prospect as it’s in a terrible state. But it came with two gooseberry bushes complete with red gooseberries. They were a bit past their best as you can see from the photograph above, but still worth cooking with.

Gooseberries are related to blackcurrants. For more information on this astonishing fruit, head over to my post, all the blackcurrant recipes you will ever need. An average portion of gooseberries, about 100g, contains 40 calories and about a third of the daily Vitamin C requirement. Gooseberries are also high in vitamin A, manganese, copper and dietary fibre. As they contain a heap of antioxidants, they’re said to help prevent cancer, diabetes, inflammation and cardiovascular diseases.

Gooseberries are a little more fiddly to prepare than many berries. If you are using them whole, it’s best to top and tail them first. This isn’t difficult, you just need to pinch out the tops and tails with your fingers, but it does add a bit more time to proceedings. If you buy them, you may find they’re already topped and you only have to do the tails. You can also buy them frozen.

This honey gooseberry upside-down cake is a really simple one to make. It doesn’t require many cooking implements so washing up is kept to a minimum. That’s always a big plus for me. I spend far more time at the kitchen sink than I’d like. You need just one large saucepan to prepare the batter. Just make sure you use the same one to first melt the butter for the upside-down bit.

Why is this cake so easy to make? Unusually for a sponge, you melt the butter and honey together rather than beat them, so there’s much less effort involved. This method is normally used for dense cakes such as brownies and ginger cake. Despite this, the honey gooseberry upside-down cake has a really light sponge as you can see from the photo below. And don’t forget I’ve made it with my favourite baking flour, wholemeal spelt.

The secret is twofold. Use kefir, buttermilk or sour milk with a little bicarbonate of soda to help with the rise. And when you sieve the flour, discard any big bits of bran that are left behind in the sieve.

As the sponge rises, the gooseberries cook and the butter and sugar coalesce. This caramelises the edges beautifully and when you turn the cake out, you get a fruity toffeeish top which has partly sunk into the cake. It’s so good. You’ll just have to try it for yourself.

Show Me Your Gooseberry Upside-Down Cake

Thanks for visiting Tin and Thyme. If you make this honey gooseberry upside-down cake, I’d love to hear about it in the comments below or via social media. Do share photos on your preferred social media site and use the hashtag #tinandthyme, so I can spot them.

Serve immediately with custard or cream or leave to cool completely and enjoy for afternoon tea or elevenses.Please note: calories and other nutritional information are per serving. They're approximate and will depend on serving size and exact ingredients used.