A healthy (ish) vegan version of a classic carrot cake topped with cashew nut icing. It’s made in traybake form with wholemeal spelt flour and less sugar than most. A healthy vegan carrot cake it may be, but it tastes just as it should. That’s to say, squidgy, spicy and altogether flavoursome. 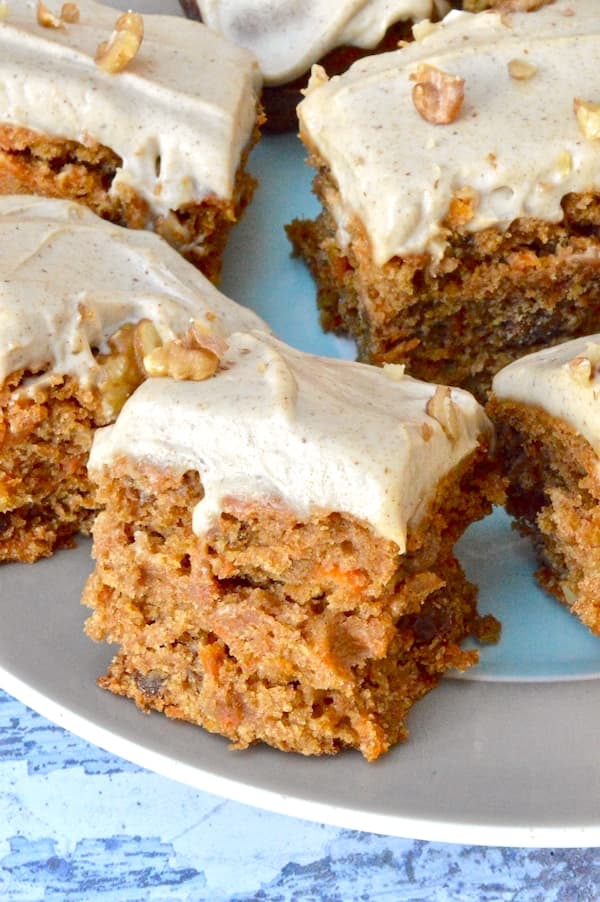 When I baked my first vegan cake, many years ago, I was just a tad dubious. How can a cake without butter or eggs taste like a cake and just as importantly have a cakey texture? As soon as I bit into my vegan chocolate cake though, I was completely won over. I’ve never turned my nose up at a vegan cake since.

When it comes to carrot cake, everyone has their own ideas of what it should contain. Orange, sultanas, walnuts, even coconut and pineapple are common ingredients. You can use any of these or none of them.

For me a classic carrot cake needs to incorporate orange, walnuts and sultanas. So that’s what you’ll find in my healthy vegan carrot cake recipe.

What’s less controversial though is that it contains carrots and some sort of spice. It should also be made with oil rather than butter. This makes it particularly easy to create a vegan version.

However, you don’t need to go to the bother of using egg replacers in this recipe. Carrot cakes are meant to look rustic and neatly cut slices are not required. You may get crumbs, but the cashew nut icing is soft and sticky, so you really need a fork to eat it anyway. All the best carrot cakes require a fork in my experience.

My healthy vegan carrot cake is so called as I use wholemeal spelt flour in the batter as well as less sugar than most recipes. The sugar I do use is unrefined and well, there’s also the carrot.

To flavour the cake I’ve gone with a lovely mix of cinnamon, ginger and nutmeg. Boy oh boy, I can’t tell you just how delicious this cake is.

The actual cake mix is really easy to make. It’s pretty much a simple process of stirring the dry ingredients into the wet ones and then adding the carrot, walnuts and sultanas.

Once the cake is out of the oven and cooling, make the cashew nut icing.

When I remember, I soak my sultanas in the orange juice at the same time as soaking the cashew nuts. It makes them plump and juicy.

Normally you’d top a classic carrot cake with cream cheese icing. You obviously can’t do that for a vegan carrot cake though, especially a healthy version. Luckily cashew icing makes a good substitute.

Cashew nuts are particularly good for this purpose as they contain fat and have a creamy texture when you blend them. Unlike most other nuts, they’re relatively soft to begin with and don’t have a super crunchy texture. They’re also fairly bland which means they carry other flavours well. You need to roast them to bring out their sweet nutty notes.

In addition to the cashew nuts, you need just a few simple ingredients. One of these is plant milk. I use cashew milk so as not to mix up the flavours too much, but any plant milk will do.

To sweeten the icing, I use dates. They contain soluble fibre and various antioxidants, so they’re a firm favourite with me. Medjool dates are wonderful sweeteners, but they’re also very expensive, so I tend to use Persian dates or deglet noor instead. Do check to see if your dates contain pits though and make sure you take them out before adding them to the cashew nut icing mix.

Dates give the icing a bit of a caramel flavour, colour and flecks, so if you’d rather not have these, use maple syrup instead.

For flavour and to echo the spicy notes in the cake, I add a little cinnamon. Likewise, I include orange juice, which has the additional benefit of lightening the texture.

If you really want that cheesy tang, however, omit the orange juice and add a good squeeze of lemon juice instead.

The cashew nut icing is really easy to make, but you need to be prepared and you need the right equipment.

You’ll need to soak the cashew nuts in water for at least four hours before you can use them, although it’s best to soak them overnight if possible. If you miss this step, you can do a quick soak in hot water for an hour, but a longer cold water soak is best.

In order to achieve a really smooth and creamy consistency, get yourself a good food processor or blender. A power blender will give the best results. I use my Froothie Evolve* which works a treat.

Once you’ve soaked the nuts and rinsed them, it’s just a case of chucking all of the ingredients into your blender or food processor and blitzing until you get a smooth and creamy texture. I do it in bursts and scrape the mixture off the sides a couple of times.

Spread it straight over the top of the cooled cake and scatter with a few more chopped walnuts if you wish. Cut into twelve slabs. Tuck in and enjoy.

There are two reasons why it’s best to soak cashew nuts:

Thanks for visiting Tin and Thyme. If you make this healthy vegan carrot cake with or without the cashew nut icing, I’d love to hear about it in the comments below. And do please rate the recipe. Have you any top tips? Do share photos on social media too and use the hashtag #tinandthyme, so I can spot them.

If you’d like more carrot recipes, follow the link and you’ll find I have quite a lot of them. All delicious, of course.

The cashew nuts need a few hours soaking before you can make the icing.Will keep in an air tight container for three days.Please note: calories and other nutritional information are per serving. They’re approximate and will depend on exact ingredients used.

I’m sharing this recipe for a healthy vegan carrot cake with Lavender and Lovage for #CookBlogShare.