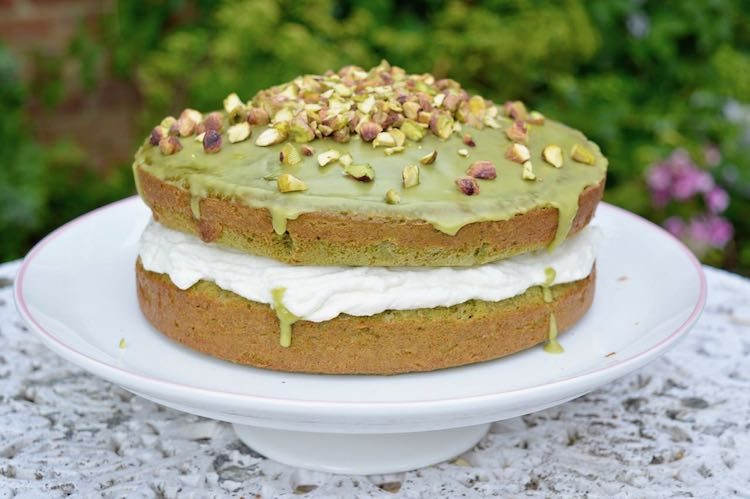 My spinach cake with lemon is a super simple version of le gâteau vert or green cake and it tastes delicious too. I was inspired after seeing this week’s episode of Great British Bake Off. I’ve made it with wholemeal spelt, but you can use whatever flour you prefer. The batter is made with spinach puree and the icing is coloured with spinach too. I’ve filled it with lemon ricotta and topped it with pistachios.

Spinach cake (ispanakli kek) seems to be a bit of a thing in Turkey. I remember years ago buying a slice at a farmer’s market back home in Cornwall and being intrigued. You can see the picture I took of it just below. That was back in the day when I never thought to put greens in my cake. Now of course it’s a bit trendy and likely to become more so since le gâteau vert featured on this week’s episode of Great British Bake Off. 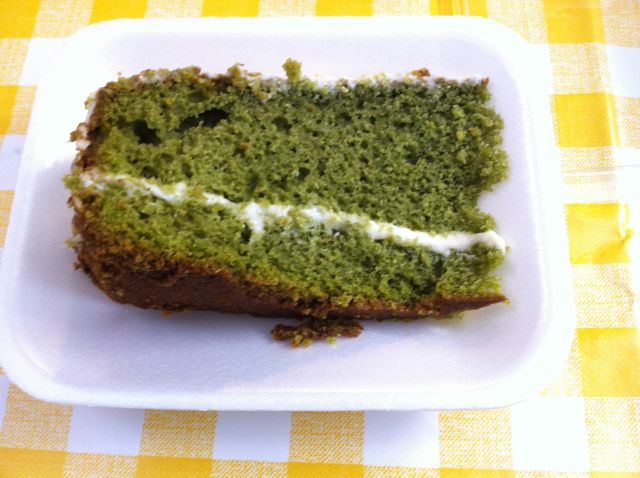 Yes, just in case you’ve missed it. Great British Bake Off is back. This Tuesday saw the second episode and the theme was cake. There were stunners, there were disasters and of course there were tears. I can’t bring myself not to watch it, but I’m not a fan since it moved from the BBC to Channel 4 and the new ‘Mel and Sue’ just don’t work for me. Apart from anything else, the adverts break any dramatic tension and are just plain annoying. Anyway, Prue Leith set the technical challenge this week and to the shock of many it was for her version of Le Gateau Vert. 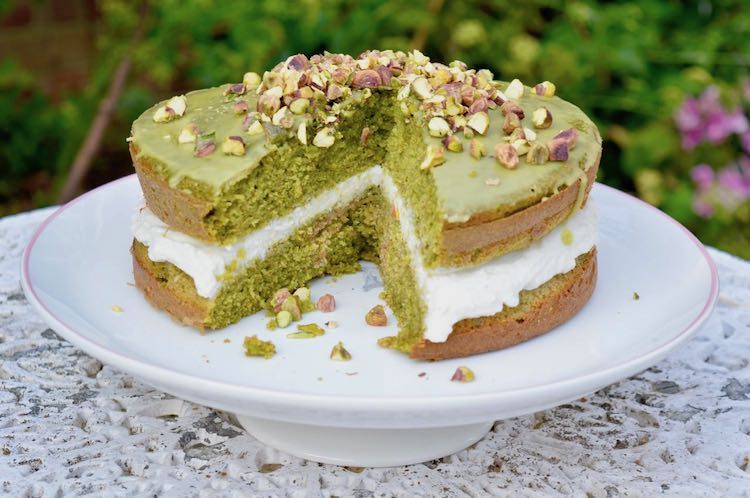 The famous impressionist painter, Claude Monet, who died in 1926, liked his food. His garden at Giverny was not just about water lilies it seems; he also grew lots of organic produce, kept chickens and employed a cook. He also possessed a substantial collection of recipes that became known as his cooking journals. In 1990, the wife of his great grandson published a selection of them: Monet’s Table: the cooking journals of Claude Monet by Claire Joyes*. Le gâteau vert-vert is one of the recipes in that book. It’s a green cake made with pistachio nuts and kirsch and has bright green icing which uses spinach as the colouring agent. 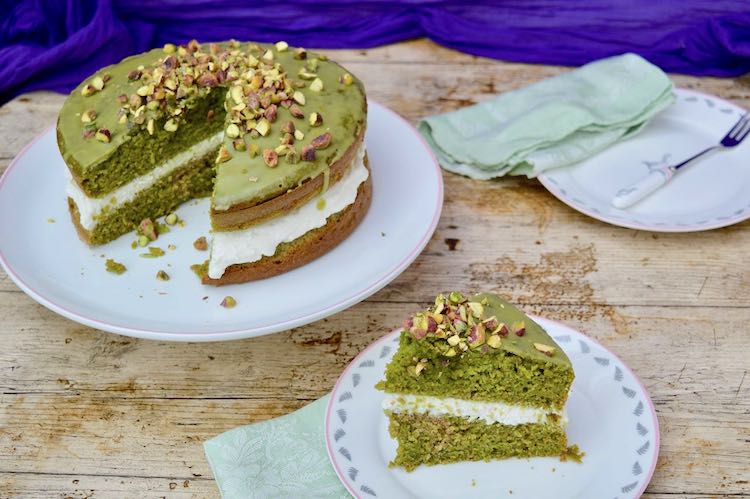 My spinach cake with lemon is totally different to either Monet’s cake or le gâteau vert made on Bake Off. It’s not only simpler to make, but it’s a lot cheaper too. Pistachio nuts are so expensive, you’d need to have a very special occasion to justify the quantity used in either of these versions. I opted for just a scattering over the top.

The spinach is briefly cooked then blitzed to make a purée. I used my super duper Optimum Vac2 Air Vacuum Blender* to do that bit. As regular readers will know, I try to use less sugar than the norm in my cakes which not only means they’re not quite as bad for you as they could be, but they’re usually a lot tastier. I find too much sugar can often overwhelm flavours. I only used a relatively small amount of fat in the cake too, but because of the spinach, it still had a lovely soft texture. Ricotta is a naturally low fat cheese, though I did add a little cream to it. But all in all, with the reduced amount of sugar and fat along with the wholemeal spelt flour and addition of spinach, it’s pretty good as cakes go. 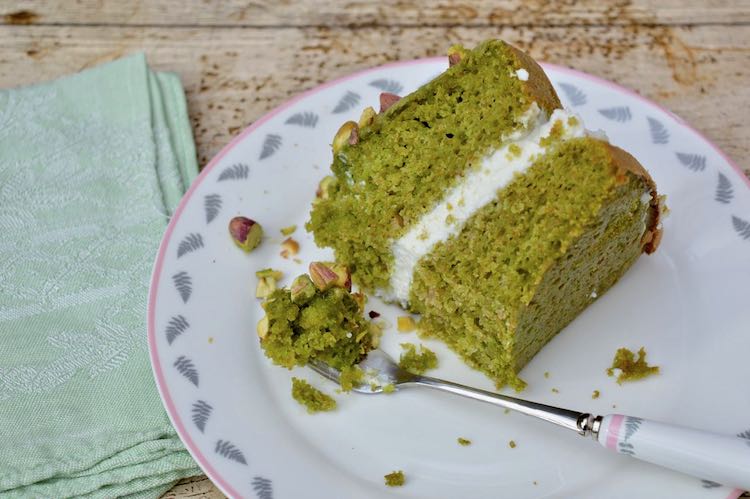 I don’t want to make you green with envy, but I’m really pleased with my spinach cake. It’s a substantial but not heavy sponge and it tastes fantastic. There’s a hint of lemon and a certain something interesting that’s hard to identify. CT told me that it reminds him of matcha cake. I don’t think anyone would actually taste the spinach though.

It’s by no means a sweet cake, but it’s a very satisfying one and the icing punctuates the underlying umami notes very effectively. The creamy ricotta and lemon filling complements the other components and the pistachios turn it into something a bit more luxurious. It was hard to stop CT from devouring the lot on day one, but luckily there was plenty left and we found it to be just as good on day two. I suspect it will still be in good shape on day three, tomorrow.

For other recipes and ideas on how to use vegetables in sweet bakes, head over to my Sweet Vegetable Bakes board on Pinterest.

Thanks for visiting Tin and Thyme. If you make this spinach cake with lemon ricotta filling, I’d love to hear about it in the comments below or via social media. Do share photos on social media too and use the hashtag #tinandthyme, so I can spot them. For more delicious and nutritious recipes, follow me on Twitter, Facebook, Instagram or Pinterest. 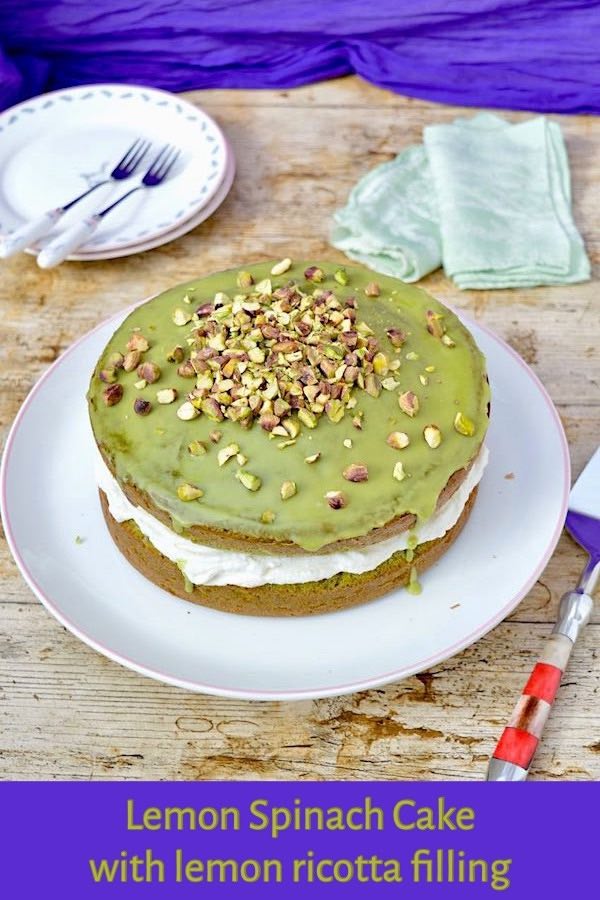 Spinach Cake with Lemon – The Recipe 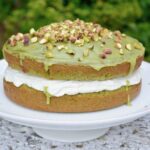 Oven temperatures vary, so your cake may need a bit more or a bit less time. Will keep for a couple of days if you're kitchen isn't too hot.

I’m sending this spinach cake with lemon off to #GBBOBakeoftheWeek hosted by Mummy Mishaps and Casa Costello.

I’m also sharing my green cake with #BakingCrumbs hosted this month by Jo’s Kitchen Larder and alternately with Only Crumbs Remain, #CookBlogShare, hosted by Recipes Made Easy this week and #CookOnceEatTwice with Searching for Spice.

This post contains affiliate links to Froothie Optimum products* and Amazon. Links are marked with an *. Buying through a link will not cost you any more, but I will get a small commission. Thanks to my readers for supporting the brands and organisations that help to keep Tin and Thyme blithe and blogging.