It’s rare for me to post something so close to the day I’ve actually made it, as I seem to have a permanent backlog, but this one has jumped the queue as time is running out. I’ve been admiring Battenberg cakes I’ve seen on various blog sites for a while, but I’ve managed to ignore the urge to make one until now. To be honest, I was a little nervous and suspected it might be beyond my capabilities. 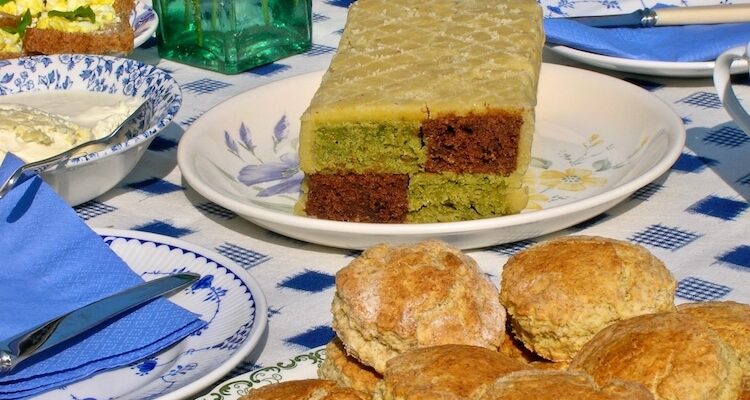 With this month’s We Should Cocoa challenge being marzipan, it seemed like I should stop wimping out and give this rather gorgeous looking retro cake a try. Of course, I wasn’t interested in making the traditional pink and yellow version, oh no, I wanted something a little different and it had to contain chocolate of course. I’m also a fan of using matcha with chocolate, so decided to use up the last of the Vitalife matcha sample I was sent a few months ago.

As my base I used the recipe from Fiona Cairns’ Bake & Decorate. As it was for We Should Cocoa and also for an Easter tea with friends, I thought I ought to make my own marzipan.  I had a look at the ingredients on some commercial marzipan and that sealed the deal for me: only 24% almonds compared to my 60%, the rest of it was sugar. In the back of my mind, however, I had a vague memory of struggling with my last attempt at marzipan which was crumbly and difficult to roll.

How right I was to doubt the marzipan! Still, although this cake may not have looked quite as I’d envisaged or hoped, it was most certainly delicious.  The cake was firm but moist and the two flavours complemented each other nicely (I did try the trimmings). Both the cocoa and the matcha flavours were present, but neither dominated. The marzipan may have been crumbly, but it tasted delicious. It was almondy, of course, but not overpoweringly so and certainly not overly sweet.

This cake has yet to be tasted by anyone else, but I’m feeling fairly confident that it will be enjoyed later on today, crumbling and cracked marzipan notwithstanding. If it hadn’t been for the We Should Cocoa challenge, I would never have made this cake. I’m not sure I’m likely to make it again, either. If I do, I’ll use bought marzipan, unless someone out there can explain the arcane mysteries of successful, pliable marzipan to me.

PS Now back from moorland tea party. The chocolate matcha battenberg was enjoyed by all as part of a sumptuous spread.