If you’ve not tried baking with matcha yet, these matcha cupcakes with white chocolate are a good place to start. The flavour is intriguing, but delicious. The green tea notes are nicely offset by the white chocolate. 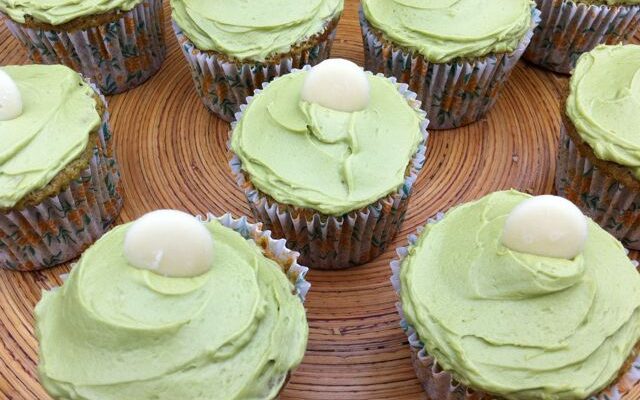 Something green for We Should Cocoa, Chele stated! Err, well, OK. After last month’s testing challenge, why not have another one? Only when I thought about it, it wasn’t that difficult after all. It has been a while since I last used matcha (powdered Japanese green tea) in a cake and here I was presented with the perfect opportunity to use it again. In fact I had a whole load of cakes to make and wanted different colours, textures, flavours and sizes, so matcha cupcakes would be perfect – or so I hoped! A bit of a left of field choice perhaps, but I thought they were worth the risk. More on why I needed so many cakes in this post: Cakes for a Book Swap.

The cakes were based on some green tea and white chocolate cupcakes that I made a couple of years ago. I made them for CT’s birthday as green tea brings back happy memories of his time in Japan. Sadly, I had no matcha powder. So I ground up some Japanese green tea leaves instead. Although the cupcakes tasted good, they didn’t look particularly lovely. The sponge was light and moist with a good crumb structure. The cakes had a subtle hint of tea that lingered on the palate and the flavour was echoed nicely by the ganache topping. Combined with the richness of the white chocolate, it was first class according to CT, who snaffled a pre-birthday taster.

This time I used matcha powder rather than green tea leaves. As you can see, it worked much better and the icing was something altogether different.

Just in case your stuck for green ideas, how about a spinach cake? Here is a slice of Turkish spinach cake I tried at Truro market last year.

Thanks for visiting Tin and Thyme. If you make these matcha cupcakes, I’d love to hear about it in the comments below. Do share photos on social media too and use the hashtag #tinandthyme, so I can spot them.