A deliciously moist swirl cake where you get double the delight with two cakes in one. A chocolate cake with rum soaked raisins and a coconut and lime cake. Drizzled with a little lime icing for a finishing touch. This double delight bundt cake is easy to put together, but makes quite an impression. 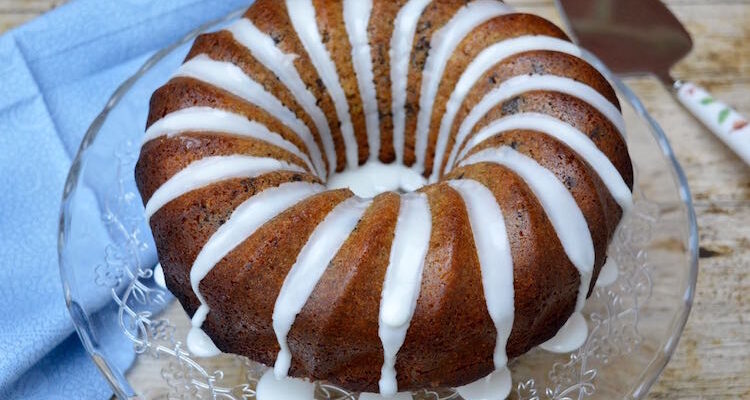 One of my favourite ways to bake a cake these days is using my silicone bundt mould. With very little fuss, I can make an outstandingly tasty cake that looks as though a lot more work went into it, than actually has. When my uncle turned up to help us clear the garden a couple of months ago, I made him this double delight bundt cake. Cunningly, it’s two cakes swirled together to make one: chocolate rum & raisin and coconut & lime. When I say ‘him’, I clearly mean that we all got to indulge in a slice or two.

Why has it taken me this long to blog the recipe? Inevitably I cook and bake a lot more than I ever have time to put up on the blog and sometimes a bit of a queue builds up. Many of the recipes I intend to publish and take photos of never make it to the blog at all. On occasion, I may have lost some of the scribbled notes I make when creating the recipes or I never wrote anything down at all – yikes!

Why Make One When You Can Make Two?

Luckily, this isn’t one of them. It may have taken a while, but this double delight bundt cake with chocolate rum & raisin and coconut & lime is too good to miss. Both the chocolate rum & raisin batter and the coconut & lime make excellent cakes in their own right, but baking them together in this way doubles the delight. The flavours marry well and the different colour batters provide a good contrast. Over the years, I’ve found a mixture that works brilliantly for my bundt cakes and all I need to do is play around with it a little to alter flavours and textures. Then it’s just a case of finishing it off with a drizzle of icing, sauce or chocolate ganache.

This double delight bundt cake with chocolate rum & raisin and coconut & lime is pretty easy to put together. It’s a simple process of creaming the butter and sugar, beating in the eggs, then stirring in the flour and other ingredients.

I keep a jar of rum soaked raisins ready for all eventualities, so for me it was just a case of digging out a couple of spoonfuls. If you don’t happen to have one of your own (though I strongly recommend it), just soak some raisins in rum an hour before making the cake.

You can make most of the cake batter in one bowl. Then it’s just a case of dividing the mixture in two. Add ground almonds, cocoa and rum soaked raisins to one half and desiccated coconut, lime zest & juice to the other half. Add a spoonful of one to the bundt pan, then a spoonful of the other and so on until all of the mixtures are used up. Bake the cake, add a drizzle of lime icing over the top and hey presto, you have a scrumptious cake fit for Sunday afternoon tea, a birthday or entertaining guests.

Annoyingly, in the general excitement of cutting into the cake, I didn’t manage to take any photographs of the inside. If you want an idea though, it looked, something like this chocolate orange bundt cake. See the photo above.

If soaking the raisins specifically for the cake, add any rum that hasn't been taken up by the raisins.
Tried this recipe?Take a photo and mention @choclette8 or tag #tinandthyme on Instagram, Twitter or Facebook.

This double delight bundt cake with chocolate rum & raisin and coconut & lime is my entry to this month’s #WeShouldCocoa.

I’m also sharing this double delight bundt cake with the following linkies: Baking Crumbs, normally hosted by Only Crumbs Remain, but this month by Jo’s Kitchen Larder; Bake of the Week with Casa Costello and Love Cake with JibberJabberUK.