These rum and raisin cupcakes are a delicious, but rather boozy bake. They’re reminiscent of Old Jamaica, a vintage rum and raisin flavoured chocolate bar. Rum soaked raisins in the cakes which are topped with rum buttercream. Best enjoyed by adults. 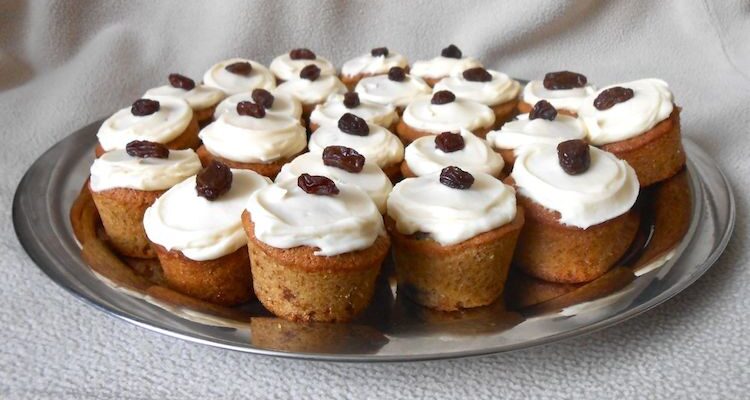 Who else remembers Old Jamaica? When I was a child, I used to save up my pocket money so I could occasionally indulge in what seemed to be a highly sophisticated treat at the time.

I have a jar of raisins soaking in rum permanently on the go, but as the jar hides at the back of the cupboard, I keep forgetting about it. When I saw a recipe for rum and raisin cupcakes in Primrose Bakery Christmas, I was instantly reminded of it.

A Feast of Mini Cakes

This was the 4th bake for a friend’s event two years ago. I’ve just discovered the post in my draft folder – I think I may have a few more. Luckily I wrote the recipe down at the time, or it would remain forever forgotten. I’ve already posted about the mini chocolate surprise cakes, the dairy and gluten free lemon and almond coconut cakes and the apple crumble cakes with custard buttercream that I also baked for the event.

For these rum and raison cupcakes, I used my standard mini cupcake recipe. It has stood the test of time. In true cupcake style, the cakes are topped with buttercream, but a buttercream doused in rum. For this reason, it’s probably best to keep these cakes as adult only fare.

All of the cakes went down very well, but I do remember that these were a particular favourite.

Rum and Raisin Cupcakes. PIN IT.

Thanks for visiting Tin and Thyme. If you try these rum and raisin cupcakes, I’d love to hear about it in the comments below. And do please rate the recipe. Have you any top tips? Do share photos on social media too and use the hashtag #tinandthyme, so I can spot them.

Rum and Raisin Cupcakes – The Recipe

Makes 24 mini cupcakes or 12 large ones.Adapted from Primrose Bakery Christmas by Martha Swift.Please note: calories and other nutritional information are per serving. They’re approximate and will depend on serving size and exact ingredients used.

I’m sharing these mini rum and raisin cupcakes with Treat Petite over at The Baking Explorer. The bakes also go to Bake of the Week with Mummy Mishaps and Casa Costello. And I’m also sending them to #CookBlogShare which is with Easy Peasy Foodie this week.