Ginger and orange are classic flavour pairings for rhubarb. This rhubarb bundt cake contains both. Rhubarb and orange are in the actual cake and ginger goes into the glaze which is drizzled over the top. The bundt looks really impressive, but it’s really quite an easy cake to make. It’s deliciously moist with a good crumb structure and it cuts well. 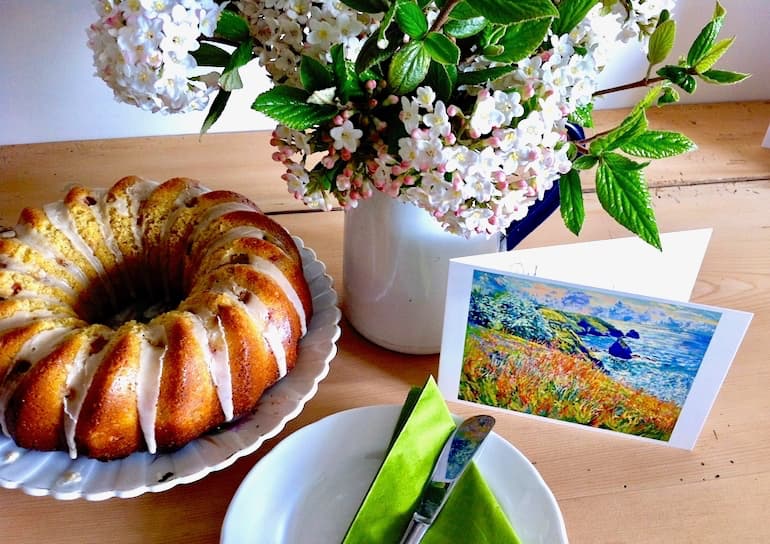 A couple of weeks ago, we were invited over to friends for a birthday lunch. This was to be followed by a walk from Respryn Bridge at Lanhydrock to Duchy Nurseries, so we could indulge in a cream tea. But first I needed to make a birthday cake. A rhubarb bundt cake with a hot ginger glaze to be precise.

As it was a beautifully warm spring day, a light seasonal cake seemed appropriate. I had the first of my mother’s rhubarb raring to go and the last of my Spanish oranges. Rhubarb pairs particularly well with both orange and ginger I’ve found.

In my pre Chocolate Log blog days, I used to make a rather gorgeous rhubarb and ginger cake, but it’s quite heavy on the flavouring and more of a cold day bake. Rather than use lots of ginger in the sponge, I thought a gingery glaze would do the trick instead.

I used the rest of the rhubarb to make these rhubarb and rose waffles, which are a real winner.

The birthday boy was delighted with his rhubarb bundt cake and we all had a slice after a hearty bowl of soup for lunch. It turned out just as I hoped and was lightly fruity without being stodgy. Bursts of tart rhubarb exploded on the tongue and the touch of hot spiciness from the ginger glaze made a welcome contrast.

It set us up very nicely for our afternoon walk where spring flowers abounded. Magnolias are always splendid at this time of year in Cornwall but yellow ones are a little more unusual. We refuelled at the Duchy Nursery cafe where it was warm enough to sit outside and enjoy the picturesque views of Restormel Castle and the Fowey valley below. My kind of day.

Thanks for visiting Tin and Thyme. If you make this rhubarb bundt cake, I’d love to hear about it in the comments below. And do please rate the recipe. Have you any top tips?  Do share a photo on social media too and use the hashtag #tinandthyme, so I can spot it.

If you’d like more bundt cake recipes, follow the link and you’ll find I have quite a lot of them. All delicious, of course.

Rhubarb and Ginger Cake – The Recipe

The cake cuts into 8 large slices or 16 moderate ones.Please note: calories and other nutritional information are per serving. They’re approximate and will depend on exact ingredients used.

This rhubarb bundt cake may not be a particularly brightly coloured cake, but it’s flecked with pink from the rhubarb and has a gingery coloured icing, so I am sending it to Love Cake over at JibberJabber UK, where the theme this month is Colour Me Pretty.