Delicious fudgy chocolate brownies with a hint of coffee and a swirl of unctuous almond nut butter. Whilst you couldn’t call these coffee brownies good for you, the ingredients used are healthier than your average brownie. 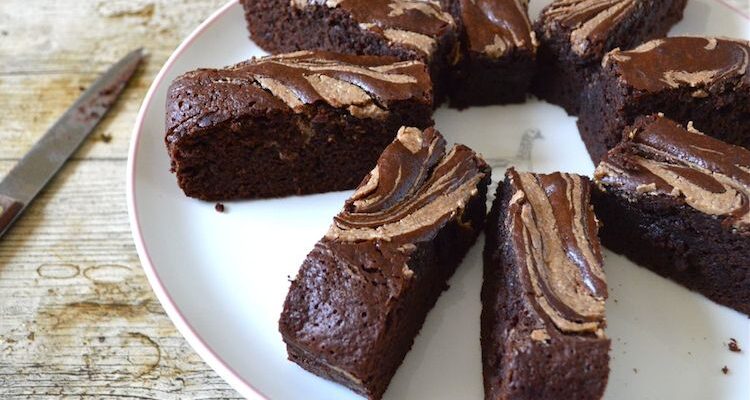 There’s no doubt about it, brownies are never going to be super healthy. However, as regular readers will know, they are one of my favourite bakes so I do like to make an attempt to up their nutritional value.

These coffee brownies with almond nut butter are similar to my winning healthier brownies with cashew nut butter. They are simple to make and are just as fudgy and delicious as you’d expect a good brownie to be.

Some time ago I saw a post over at Food to Glow for espresso nut butter. For some reason this mix has been mulling in the back of my mind ever since. Finally, it popped to the fore and inspired me to make these coffee brownies with almond nut butter.

If you need a bit of a wake up to your afternoon, the combination of coffee and cocoa should do the trick. But don’t worry, there’s not nearly enough of either to stop you from sleeping later on. Well, not unless you eat the lot in one sitting. The coffee flavour complements and reinforces the chocolate without overpowering it and marries delightfully with the unctuous almond butter.

Every month I run a blog link-up for anything made with chocolate. On the first of the following month I publish a post with a picture and link to all the wondrous recipes that have been shared.

We Should Cocoa has been running for nearly seven years now and there is a wealth of chocolate recipes to be found in its archives. If you’d like to join in, instructions and a link to the current month can be found on the We Should Cocoa page.

These coffee brownies with almond nut butter may still be hugely calorific, but I’ve substituted the classic “heart attack” components for some healthier ingredients. I used coconut oil and almond butter rather than dairy butter, 85% dark chocolate rather than 70% and coconut sugar rather than refined sugar.

Sprouted flour is said to be easier on the human digestive system than conventional flours. It’s also meant to increase the nutritional value with more B vitamins, vitamin C, folate, ﬁber, and essential amino acids. What could I do? I just had to replace regular flour with sprouted flour.

Thanks for visiting Tin and Thyme. If you make these healthier coffee brownies, I’d love to hear about it in the comments below. And do please rate it. Have you any top tips? Do share photos on social media too and use the hashtag #tinandthyme, so I can spot them.

If you’d like more coffee recipes, follow the link and you’ll find I have quite a lot of them. All delicious, of course.

Can substitute ¾ tsp of baking powder for the bicarb and cream of tarter.Please note: calories and other nutritional information are per serving. They’re approximate and will depend on serving size and exact ingredients used.

These coffee brownies with almond nut butter form my entry to this month’s We Should Cocoa.

I’m also sharing these unctuous delights with Love Cake at Jibber Jabber UK as the theme is brownies this month.

They also go to Bake of the Week with Casa Costello and Mummy Mishaps. And lastly, Cook Once Eat Twice with Searching for Spice