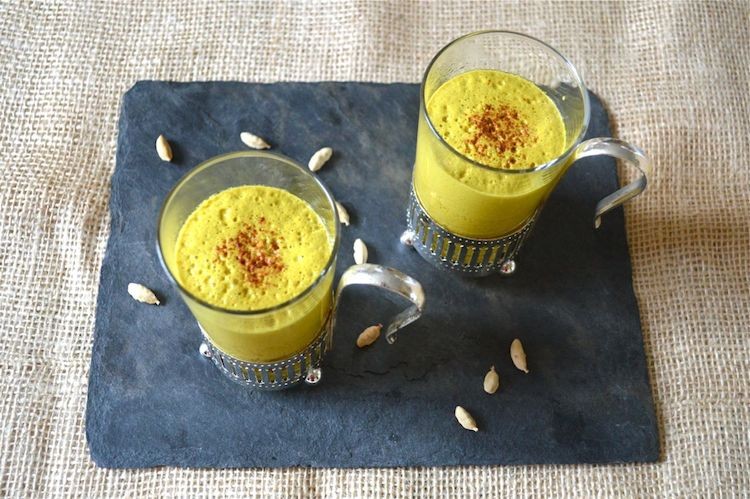 Healing, soothing and delicious, this spiced turmeric milk is a good drink to indulge in before going to bed or first thing in the morning.

Age is supposed to confer wisdom, but the main thing I notice these days is that my joints are a little creaky. I try to alleviate this by getting as much turmeric into my diet as I can. This is the first time I’ve made it the star of the show, however.

Building on my recent success with hemp milk, I decided to combine these two oriental power houses to make spiced turmeric milk. If the hemp doesn’t get you, the turmeric will.

Turmeric (Curcuma longa) comes from the same Zingiberaceae family as ginger and is native to south Asia. Known as  the Golden Goddess in some cultures, it has been used as a healing spice for thousands of years. Although the curcumin it contains is best known as a powerful anti-inflammatory, turmeric has many other benefits.

I’m not going to list all of them here as there are plenty of more knowledgeable sources of information than mine. Suffice it to say it’s meant to be good for colds, digestion, poor circulation and arthritis. It’s also said to help prevent or treat many of the diseases which are so prevalent in our time: cancer, Alzheimer’s diabetes and IBS to name but a few.

I added a couple of other healing spices to my turmeric milk: cinnamon and cardamom. Not only do they have their own healing properties, but they taste good too. Cinnamon helps to control blood sugar and cardamom is a stomach soother. The last thing to go into the mix was honey.

Honey is another ancient healer and contains trace amounts of many vitamins and minerals. I understand the Ayurvedic tradition is to drink turmeric milk before going to bed as it helps to promote sleep, but it’s also good as a morning pick-me-up. 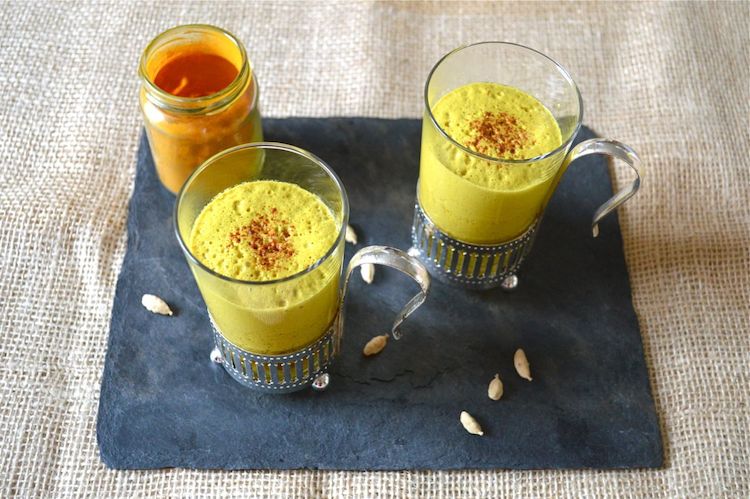 The spiced turmeric milk turned out to be a lot nicer than I was expecting, delicious in fact. Taking one’s medicine has never been so pleasant. You can of course, use whatever milk you like, but the hemp milk gives it a nice nutty flavour that acts as a complementary backdrop to the spices and honey.

The body needs a certain amount of fat to help absorb the curcumin in the turmeric. So if you’re using a fat free or low fat milk, add a teaspoon of coconut oil. Likewise, a little black pepper helps too. I’ve thus included a grinding of black pepper in the recipe below.

Thanks for visiting Tin and Thyme. If you try this spiced turmeric milk, or any other, I’d love to hear about it in the comments below. Do share photos on social media too and use the hashtag #tinandthyme, so I can spot them. 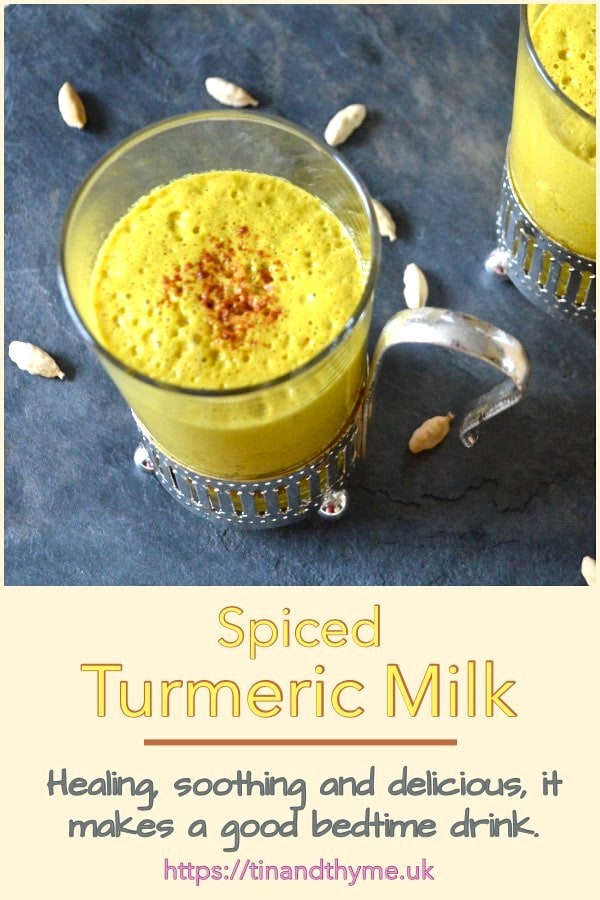 Traditionally taken as a nighttime beverage. The body needs a certain amount of fat and black pepper to help absorb the curcumin in the turmeric, so if you're using a fat free or low fat milk, add a teaspoon of coconut oil. Please note: calories and other nutritional information are per serving. They're approximate and will depend on exact ingredients used.