A healthful warm milky drink that is tastier than you might imagine. This golden turmeric latte really is the best drink in town. 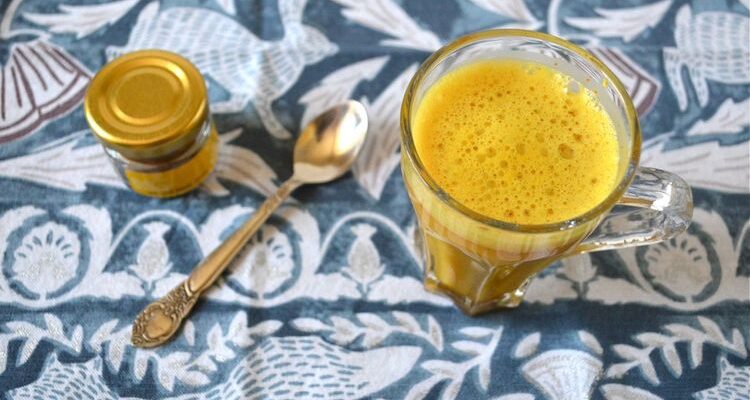 I know I’ve given a recipe on Tin and Thyme for spiced turmeric milk already, but this being Veganuary and all that, I thought I’d give you my vegan version. Plus I’ve learnt a thing or two about the super spice since writing that post. Golden turmeric latte is not only a healthful drink, it’s also quite delicious.

Turmeric is not the most obvious ingredient for a drink, but it’s becoming increasingly popular. Even in our quiet country town, our local cafe, Olive & Co, does a mean turmeric latte. It’s become my favourite drink to order there.

Of all the common spices we’re likely to have in our kitchens, turmeric is relatively mild in taste. It might take a while to get used to it if you’re unfamiliar with the flavour, but I took to it straight away. I make a cup of golden turmeric latte two or three times a week, usually on days when I’ve not added turmeric to my morning smoothie or planning to include it in whatever I’m making for lunch or supper.

The key to consuming turmeric, apparently, is to ensure you take it with some black pepper and fat. Turmeric (Curcuma longa) is a powerful antioxidant which is best known for its anti-inflammatory effects. It’s also antiseptic, anti-fungal and anti-bacterial and has been used as a medicine for thousands of years.

Curcumin, which is the main active ingredient in turmeric is, however, difficult for the body to absorb. Piperine, found in black pepper, is said to enhance its bioavailability as does taking it with fat. This is why you’ll find a little bit of coconut oil in the recipe. Though, depending on how high in fat your milk is, you may not actually need it.

I try to consume some of this golden spice most days as my joints are decidedly creaky. Since taking it on a near daily basis for the last six months or so, I have noticed a real difference. My joints are still a bit stiff, but the pain is significantly less. I’ve also got my mother onto it; she’s really noticed an improvement in her arthritis.

Warm milky drinks have been popular for a long time and once you’ve added some sweetener, a bit of coconut oil and a sprinkle of cinnamon, this one is really very tasty. So, if you haven’t yet sipped on a golden turmeric latte, I urge you to go try a cup. It might just put a spring in your step.

It takes less than ten minutes to make and you can use whatever milk you have to hand. I often use my homemade hemp milk to add even more pep to my step.

Other Recipes Where Turmeric is the Star of the Show

Thanks for visiting Tin and Thyme. If you make this golden turmeric latte, I’d love to hear about it in the comments below. And do please rate the recipe. Have you any top tips? Do share photos on social media too and use the hashtag #tinandthyme, so I can spot them.

If you’d like more drink recipes, follow the link and you’ll find I have quite a lot of them. All delicious, of course.

Want a reminder? Why not pin this golden turmeric latte for later?