Today, the 14th February, a number of things coincide: Chocolate Log Blog is four, The Clandestine Cake Club Cookbook, featuring one of my recipes, is published and I’m off to attend my 5th CCC meeting, which just happens to be at Waterstones in Truro. This 4th blog anniversary feels like the perfect time to post about CCC. 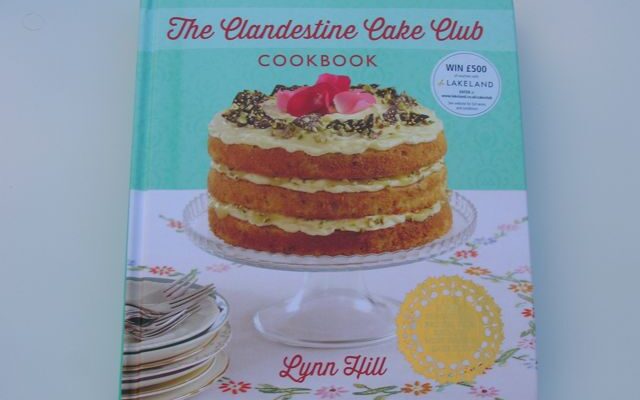 I’m sure most of you will have heard of the phenomenon that is Clandestine Cake Club (CCC) by now. If not, it’s a gathering of cake bakers and lovers who meet, usually on a monthly basis at a secret venue, to eat and talk cake.

Initiated by Lynn Hill back in 2010, it has now gone global. Lynn has been working very hard over the last year or so to write a book highlighting some of the best cakes that have been made by herself and other CCC members.

As any good Clandestine Cake Club member will know, cakes are the only thing on the menu, no brownies, cupcakes or muffins allowed, just full on proper sized cakes. Thus the book’s 120 recipes are all for cake and what a wondrous collection they are: classic cakes, Victorian cakes, fruity cakes, global cakes, zesty cakes, chocolatey cakes, celebration cakes and creative cakes.

In it you will find a cake for any occasion from the full on Toffee Shock Cake with it’s four layers of different flavoured batter, fudge icing and caramel to the more homely and old fashioned Caraway Seed Cake. This hardback book is well laid out and importantly stays open at the chosen recipe. Pictures abound, virtually every cake is accompanied by a photograph.

I submitted two entries. My Chocrhutea didn’t make it, but happily the other one did. I very much hope the book will be a rip roaring success, it certainly deserves to be.

Due to work commitments, I’m unable to attend the Cornwall CCC as often as I’d like. Luckily, I do manage to make the odd appearance. My very first time was back in May last year where I made a Passionfruit Curd Sponge Cake for a fruit themed event held at Baker Tom’s new bakery in Pool near Camborne.

This has become my second recipe to be published in a print book (though I do have a few floating around in various e-books) and I’m absolutely thrilled.

My second event had a Fairy Tale theme. The venue was the cafe down in the woods at Cardinham, which had a slightly other-worldly feel about it. There were many fabulous creations, I went for the simple approach: a Fairy Godmother cake with basic wand decoration. More accurately, it could be described as a dense chocolate and rose cake.

My third outing took place in a tiny new cafe, Grounded, which had just opened in Truro. I made a Hazelnut and Orange Torte for this one where I experimented with my new cappuccino stencils. The theme was Italian tortes.

Ellie Michell is our hard working organiser. She has come up with some fantastic venues and themes. I only wish I could manage to get to more of them. In celebration of Cornwall CCC’s first anniversary, Ellie chose a birthday party theme down at the Watergate Bay Hotel near Newquay. For this one, I made a Cornish sea salted caramel chocolate cake.

So, thank you to all you lovely visitors to Chocolate Log Blog. I doubt I would have had the heart to carry on this long without you. I’d especially like to thank those that take the time to comment on my posts. It’s this interaction which makes it so worthwhile.

Whilst I’m at it, I’d also like to thank all those that have contributed to We Should Cocoa, either as a host or entrant. Once again, it is your contributions that make the whole business so much fun. I’d never have dreamt of half of the things you all come up with. You are an inspiration.