For once, I am ignoring the queue of posts I have waiting to be written and am aiming to post this on the actual day I made the cake.  This is because time is running out.  Catty is running a Matcha Madness competition to win some Teapigs matcha powder and the closing date is fast approaching. 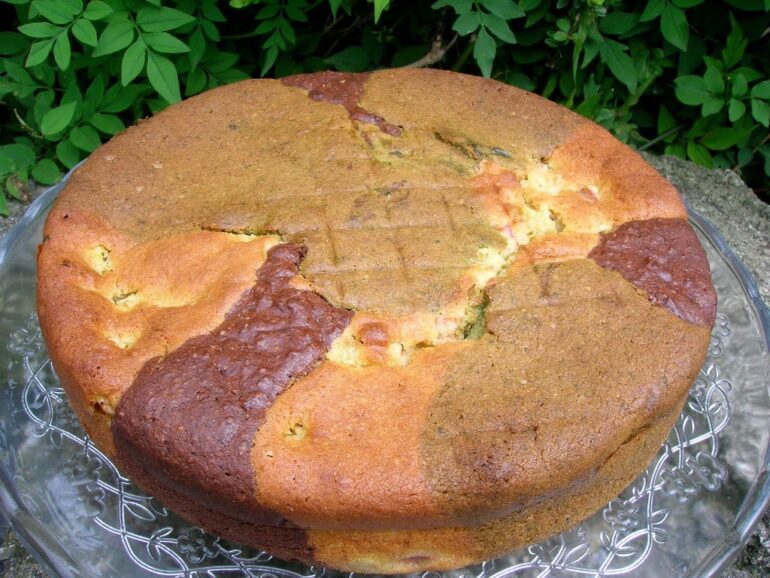 Using matcha in cakes is something of a new and rather strange concept to me.  Green tea is something I drink very readily and I was more than pleased when CT brought home several packets of matcha, in both leaf and powder form, from a visit to Japan a couple of years ago.  I had no thoughts of doing anything with it except to steep it in hot water, until I came across a post on matcha cupcakes at Kitchen Butterfly.  As soon as I saw this, it went straight onto my list of things to bake, but my list is rather a long one and it didn’t quite make it to the top – until now.

I have been pondering over the last couple of weeks what, exactly, I was going to make.  Cupcakes seemed like the obvious choice, but a combination of seeing so many wonderful marble cakes on Mainly Baking and then coming across this cake at Scandilicious made me think again.  I of course needed to get chocolate into the equation somehow and a marble cake seemed like a good way of including it.  Then my mother came along with some rhubarb from her garden – well I had to include that somehow.  Hey, why not really push the boat out and go for three flavours rather than two!  I’m calling this marble cake for want of a better name, but I wanted solid blocks of cake so they could be tasted as an entity in their own right, rather than swirled in true marble cake style.  This seemed like an ideal opportunity to use one of the Japanese sugar decorations that I received as a gift from one of CT’s Japanese contacts.

Well what a revelation – I am now sold on matcha cake.  I have to admit I was, beforehand, rather dubious about how this would turn out, thinking it was just a gimmick.  Now I’ve tasted it, I realise why so many have been raving about it for so long: it’s really delicious.  In an act of heresy, I have to admit that I preferred the matcha element of the cake to the chocolate one.  I love the colour too, it’s an amazing shade of green – colour that is natural and very good for you as well.  Overall, the texture of the cake was moist and substantial without being heavy.  It cut really well, holding its shape and leaving few crumbs. It’s like having three cakes in one – all would have been great cakes in their own right, but I loved having the combination of all those different flavours together – sometimes just a forkful of pure matcha, or rhubarb or chocolate and other times a combination of any of those three or all three – wonderful!  Chocolate and matcha maybe a bit old hat as a flavour combination now, but I reckon I am amongst a very select few who have tried it with rhubarb. Although the matcha and chocolate worked really well together, my favourite combination was the rhubarb and matcha, the sharp fruitiness of the rhubarb piercing the savoury undertones of the matcha tea.  Although the matcha cheese topping was not quite the uniform bright green I’d wanted, it didn’t take me long to get used to the speckled look.  It was also a great flavour combination complementing every element of the cake most successfully.  When CT tried it, he compared it to a game of paper, scissors, stone, with each flavour trumping the other in succession depending on the proportions in each mouthful.  In my humble opinion, this is a roaring success and would make a great birthday cake for someone.

Now I’ve used up all of my matcha powder, I need some more.  All being well, I’m hoping to have another bash at entering this competition by making some more matcha cake next week – in time for CT’s birthday.