Crisp around the edges but chewy in the middle, these banana flapjacks are tasty and not overly sweet. They’re a good way to use up brown bananas but because of the coconut and white chocolate they don’t taste overwhelmingly of banana. Use the right oats and they’re also gluten-free. They’re fairly robust, so make a good addition to lunch boxes and they’re perfect as an energy boost for outdoor activities. 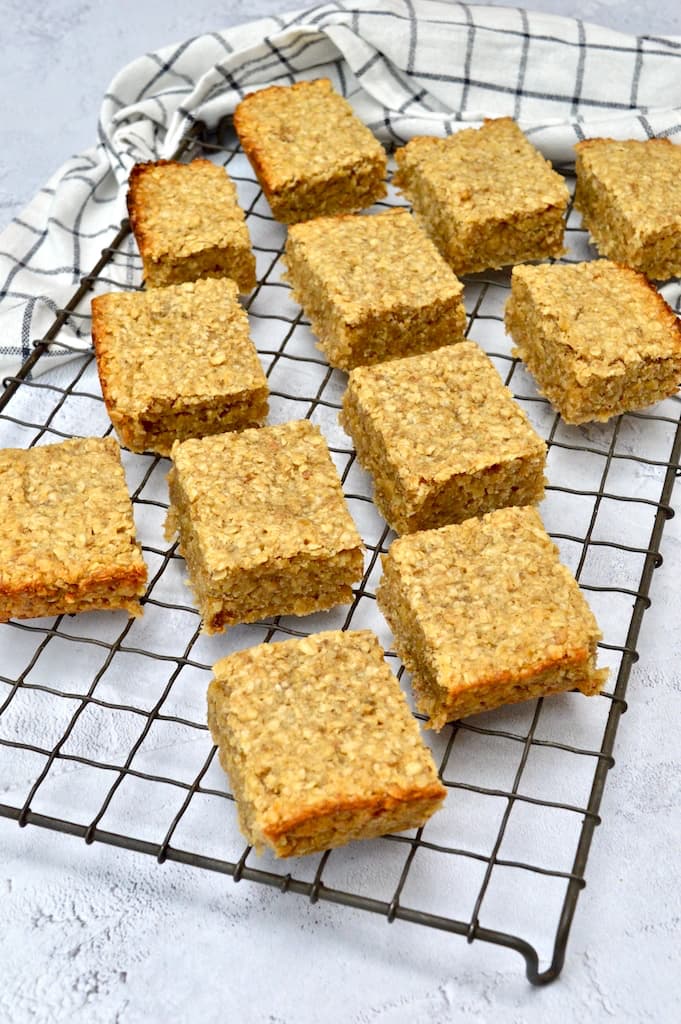 Once upon a time, I’d never made a banana flapjack. I’d seen various recipes for them over the years, but was slightly dubious about its efficacy. Once I saw this recipe over at Jam and Clotted Cream however, all that changed. Banana and coconut is a classic combination of tropical fruits and somehow it seemed like the right time to try it.

It might have had something to do with the two old bananas left over from the banana and peanut butter cake that were in dire need of using up. And it just so happened that it was Jubilee weekend and we had no cakes, bakes or other goodies in the house. It was time to try out some banana flapjacks.

They’re really flexible and you can incorporate any number of additional ingredients into them. Dried fruit, nuts, seeds and chocolate are the most common, but nut butters, jam and condensed milk work well too. To get more of an idea, why not take a look at my flapjack recipes?.

Flapjacks in the US and Canada, on the other hand, is another term for pancakes. So you can see where confusion might arise.

Flapjacks are one of my go to recipes when I need to bake something sweet fast. They’re so quick and easy to make and they don’t take too long to bake either. As an added bonus, they smell absolutely gorgeous whilst baking.

Not surprisingly, they’re also very tasty to eat. These banana flapjacks are not too sweet and not too bananary (if such a word exists). Banana and coconut are a well matched pair and the tropical flavour is really good. They’re just how I like flapjacks to be, crisp around the edges and chewy in the middle.

I adapted the original recipe, of course. At the time the blog was all about chocolate, so I added some white chocolate. I no longer need to do this, but actually white chocolate works really well. It gives the flapjacks a bit of richness and helps hold things together. So I continue to use it.

I also use less golden syrup, a little more sugar, ordinary sized bananas and a few more oats. Depending on what mood I’m in, I might sprinkle some of my signature sesame seeds over the top before popping the flapjacks into the oven.

Sometimes I make it, as I originally did, in a 23 cm (9″) square pan and sometimes in a 20 cm (8″) one. The larger pan needs less cooking time and makes sixteen thinner banana and coconut flapjacks, whereas the smaller pan makes twelve thicker bars and takes longer to bake.

How Long Will Banana Flapjacks Last?

One of the really good things about banana flapjacks, or any other flapjacks come to that, is that they store well. How long they last really depends on how hungry you are and how many people are going to eat them though. Keep them in an airtight container and they will easily last four days.

Can You Freeze Banana Flapjacks?

Banana flapjacks freeze just as well as any other flapjacks. That is to say you can store them in the freezer for up to three months. It’s best not to keep them longer than that as the texture and taste will change.

It really depends on how you make your flapjacks as to how healthy they are. You could use coconut oil instead of butter, maple syrup instead of golden syrup and coconut sugar instead of brown sugar. These substitutions will make your banana flapjacks vegan too.

I wouldn’t class this recipe for banana flapjacks as healthy, but it’s not too unhealthy either. The bars are chock full of oats, coconut and banana, all of which are healthy foods.

Although they contain sugar, white chocolate and golden syrup, the quantities are fairly low. Compare the amounts to standard cakes, cookies and puddings and you’ll see that they’re not so bad after all.

Bananas are such a useful ingredient, you’ll find a lot of recipes that include them here on Tin and Thyme. Click on this banana recipes link for the full list.

Thanks for visiting Tin and Thyme. If you make these banana and coconut flapjacks, I’d love to hear about it in the comments below. And do please rate the recipe. Have you any top tips? Do share photos on social media too and use the hashtag #tinandthyme, so I can spot them.

If you’d like more flapjack recipes, follow the link and you’ll find I have quite a lot of them. All delicious and nutritious, of course.

Crisp around the edges but chewy in the middle, these flapjacks are tasty and not overly sweet. They're a good way to use up brown bananas but because of the coconut and white chocolate they don't taste overwhelmingly of banana. Use the right oats and they're also gluten-free. They're fairly robust, so make a good addition to lunch boxes and they're a perfect energy boost for outdoor activities.
Prep Time10 mins
Cook Time20 mins
Total Time30 mins
Course: Afternoon Tea, Snack
Cuisine: British
Keyword: bananas, coconut, flapjacks, quick, traybake, white chocolate
Servings: 16 squares
Calories: 208kcal
Author: Choclette @ Tin and Thyme

Alternatively, bake in a 20cm (8″) pan for twenty five minutes. Cut into twelve bars.Please note: calories and other nutritional information are per serving. They’re approximate and will depend on exact ingredients used.

I’m sending these banana coconut flapjacks off to Bookmarked Recipes with Jac of Tinned Tomatoes.