A review of two brands who both specialise in sending brownies by post. Bluebasil Brownies is based in the Cotswold and The Brownie Baker produces their brownies in St Agnus Cornwall. 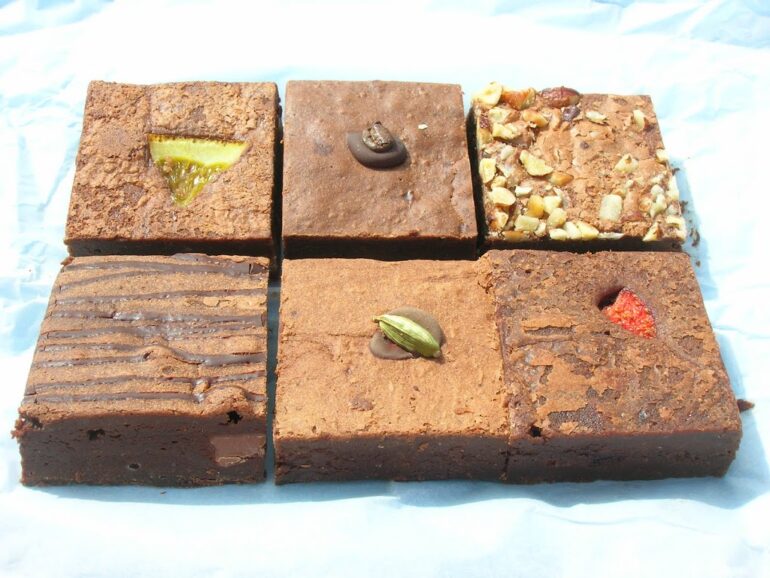 When I was offered a box of Bluebasil Brownies to review, I wasn’t going to refuse. I’ve been eyeing these brownies by post up ever since I first heard about them on Twitter. They’re a small company specialising in hand made brownies and they use good quality ingredients.

I reckoned that sending brownies by post could be a difficult undertaking, so I was wondering in what state they’d arrive. Turns out, I had no cause for concern. They’re well packaged to avoid all the bumps and drops that are inevitable in the postal system.

The brownies were most beautifully presented with full eco credentials. Blue Basil sent them in a cardboard box with shredded paper, greaseproof paper for wrapping the brownies and tissue paper for presentation. I was impressed.

When I got to look at the list of ingredients, I was impressed again. There was nothing there that I could take issue with. All the ingredients are of high quality with both the flour and eggs being local and organic (and thus free range) as well as local butter. Divine fair trade chocolate is used in some of the products, but it’s not clear what chocolate is used in the others.

On unwrapping the box of six brownies of varying flavours, a wonderful scent of chocolate and cardamom wafted into my nostrils. I then got a feast for the eyes and immediately started salivating. As ever, patience was needed and I had to take the all important photographs before I could tuck in. At last they were mine!

I was a little concerned that the cardamom would have infused the other brownies with its flavour. But no it hadn’t. They all had their own unique tastes and most were easy to spot as they had an identifying ingredient attractively embedded on the top. I did have difficulty identifying the chunky white chocolate one I was expecting, but I think there was a mix up as what I seemed to have instead was a very nutty one.

In the order that I tried them:

I had to start with this one as cardamom and chocolate are one of my favourite combinations. This is an award winning gold star brownie and I was not disappointed. It has just the right amount of cardamom, most definitely there, but not at all overwhelming. Best described as smoothly fudgy.

Definitely fruity. I could tell that real fruit is used here as the seeds kept sticking in my teeth. I could identify blackberries and thought I tasted raspberries and strawberries too. It tastes fantastic, but I wasn’t too keen on the seeds.

A lovely natural orange flavour which in no way reminded me of a Terry’s chocolate orange; something I used to love in my younger days, but which now tastes too sweet and artificial. The piece of baked orange on the top is a delight.

Topped with roasted hazelnuts and a few scattered through the brownie, it’s a crunchy delight. A lovely contrast of textures, the chewiness provided by the nuts allowed me to savour the flavours that much longer.

A classic brownie with no additional flavourings other than large chunks of milk chocolate, which give a very different consistency from the fudginess of the brownie when you bight into it. I detected a very faint trace of something sweetly spicy, so it may have picked up a little of the cardamom and possibly orange flavours. The chocolate is Divine milk chocolate.

Not being too fond of coffee, I left CT to savour this one all on his own, apart from a very small nibble. He only got a partial look in on the others, so I guess that’s fair. He thought it packed a caffeine punch, but in a nice way. Its strong, robust flavour made him want more, but he thought it would be a good pick me up. “Better than a cup of coffee” he opined, “plus it doesn’t have the annoying froth”. CT is not a coffee sophisticate, but he really enjoyed this brownie.

Other flavours include: Tiramisu, Banoffee and Chunky White Chocolate and specials are offered through the year. You can order both the chunky chocolate and the chunky white chocolate varieties as gluten-free.

To be honest, I’d be more than happy to eat any of these artisan brownies at any time, even the cappuccino. All are a satisfying size and are well balanced in terms of flavour. And all have the classic dense fudgy brownie consistency that I always hope for but don’t often get. As you’d expect, they’re sweet, but not overly so and so deliciously rich.

I only had very minor quibbles: the seeds in the Summerberry, not knowing what chocolate is used and it would be nice to see pictures of all the individual flavoured brownies on the bluebasil website.

At £14.99 for nine, these brownies are not cheap. But they’re not outrageously expensive either, certainly not for this sort of quality. A box of these brownies by post would make a most fabulous present. They’d certainly do it for me.

When I was doing my bit at the Liskeard Food Day, I was in the company of The Brownie Baker. Despite the name, they’re a husband and wife team. They’re a wonderful Cornish outfit and they bake handmade brownies in St Agnes. They supply local bakers and cafes as well as selling them direct at local markets and food fairs. These days, they sell them online too.

They very kindly gave me one of each of their six flavours to review. Strangely, I was very happy to do this.

These are fudgy brownies with lovely crackly tops, just like proper brownies should be. I can’t tell you how glad it makes me feel to be able to get such good brownies in Cornwall. Some of them I liked more than others, but I’d be happy to eat my way through a stack of any of them.

When I checked the website for more information on the products, I was pleased to see that that they use locally sourced ingredients. Sadly, no other information pertaining to the ingredients was available at the time of writing, although I did notice that the website said it was under construction.

For me, knowing what is in my food is of paramount importance so I would like to see more on the website as to the specific ingredients used.

Nevertheless, these brownies by post are absolutely delicious and a box is likely to make any brownie lover very happy indeed.

With my current addiction for sea salted chocolate and caramel, this was my favourite brownie. Chunks of salt are scattered throughout, giving wonderful crunchy bursts of flavour. CT wanted to roll it around his mouth and savour it for as long as possible. I think he must have had low blood sugar when he said this: “they are like icebergs of salt in a chocolate sea and every so often one collides with your taste buds and sinks backwards down your gullet like the Titanic”. What is he like?

One bite of this sour cherry brownie and I was no longer so sure that the seasalt was my favourite after all. It’s really delicious. It contains dried cherries soaked in cherry brandy which gives a tart and refreshing burst within each mouthful. I also detected a pleasant but unidentified flavour, which I thoroughly enjoyed. I’d love to know what it is.

This brownie is liberally studded with chunks of Cornish fudge. It’s good but my least favourite of all, as it’s a little too sweet for me. The overall taste suggests that it’s picked up caramel notes from the fudge, giving it its own unique flavour and softer texture. CT and I agreed that pieces of salted fudge would have counteracted the sweetness and suited us better.

This is a really good chocolate brownie with milk chocolate chunks scattered throughout.

The flavour is unmistakably orange with a slight bitter grapefruit tone, which gives it a more realistic and rounded orange taste. However, it’s a bit too strong for CT, who’s rather fussy about orange flavoured chocolate. Overdosed on chocolate oranges when a kid, I reckon.

This is a variation on the classic brownie as it includes chunks of white chocolate. These give added interest by creating an occasional change in texture and flavour and thus makes for a sweeter taste experience.

If you fancy making your own homemade brownies and gifting them to friends and family, you’ll find quite a selection of brownie recipes here on Tin and Thyme. Here’s just a few you might like.

Thanks for visiting Tin and Thyme. If you try either of these Brownies by Post, I’d love to hear about it in the comments below. Do share photos on social media too and use the hashtag #tinandthyme, so I can spot them.

If you’d like to see more reviews, follow the link and you’ll find I have quite a lot of them.

I was given these products for review purposes. The brands did not expect me to write a positive review and all opinions are, as always, my own. Thanks for your support of the brands and organisations that help to keep Tin and Thyme blithe and blogging.

Previous Post: « We Should Cocoa – The Rose Round-up
Next Post: Apple Hazelnut Cake with Sultanas and Chocolate Chips »