Subscribe and receive my FREE 7 day vegetarian meal plan Subscribe
Home » Reviews » Eating Out, Travel and Events » Capturing Cornwall » The Fine Food and Folks of Liskeard
Share on TwitterShare on FacebookShare on PinterestShare on LinkedInShare on E-mail 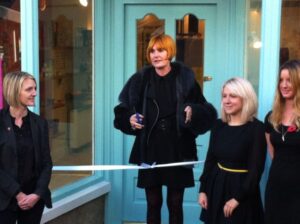 Thursday was the grand opening of the Liskeard Town Shop and the last day of filming by the Mary Portas team. This followed on from a high street clean up event a couple of weeks earlier, where residents from the town and local area turned out in force to scrub, sweep, paint and plant. CT and I were on planting duty; I don’t think I’ve ever planted as many polyanthus in my life. Thursday’s event was intended to showcase the fine foods of Liskeard. Mary, with film crew in tow, commenced proceedings by opening the shop. The gathering throng then descended on the samples of local producers and munched and slurped their way through them in traditional Liskeard style. I had been asked by the good folk of Love Liskeard if I’d like to provide some cake samples. What could be better than combining cake baking with helping my home town? An offer I could not refuse.

Our very own fudge lady The Gingham Chicken was represented with huge baskets stuffed full of her tasty fudge. Yummy, a new cake shop specialising in wedding and other celebration cakes provided plates of sponge, bakewell tart and little chocolate mayonnaise cakes. I happily drank a glass of wine provided by a local producer, but rather stupidly didn’t take note of the name and no, I wasn’t drunk. The Liskeard area is fortunate to be well endowed with cheese makers. The award winning Cornish Blue is just up the road as was the now famous Yarg, wrapped in nettles. Sadly, Lynher Dairies outgrew its original premises and has now decamped down west. But we now have a third cheese from the Cornish Gouda Company, the only gouda to be made in the South West. I can vouch for the quality of the cheese, which we’ve bought a few times from the recently restarted farmer’s market. Giel Spierings is from a Dutch family and presumably fuels his epic canoe exploits with his cheese. The cheese comes in various varieties, my favourite being the mature one. The honey and clover is also delicious: aromatic with essence of hay meadow. Cornish Orchards, a now quite famous Liskeard apple juice and cider company was there, but I didn’t get to see them.

We were also joined by a not so local producer, but one we felt glad to accommodate. The Brownie Bakers is a Cornish company making scrumilicious handmade brownies which it sells all over Cornwall. We were very happy to have platefuls of their samples to dip into when the desire arose. And last, but by no means least (I hope), was yours truly, with two types of chocolate cake and a few pictures of my cakes of yore. I made a Cardamom Chocolate Traybake and an Apple, Rose and White Chocolate Traybake, both cut into 36 pieces.

Later in the day, my favourite greengrocer, Beddoes unveiled their newly developed leek, broccoli and Cornish blue cheese pie. I am particularly thrilled by this as I love pies and it can be quite hard getting hold of a good vegetarian one – this was delicious. A competition was held to find a suitable name for the pie, but the results have not yet been revealed; I’m still on tenterhooks to see if CTs suggestion of Leekskeard Pie will be adopted. This was to compete with a fish pie from the fish shop and a road kill pie from the butchers – neither of which I was interested in, but their samples disappeared quite quickly I noted.

Other festivities included a window display competition, prepared by art students at Liskeard Community College. I was pleased to discover that the winner was our most excellent bookshop. The local yarn bombers, organised by the Knitting Fairy, were out in force and covered the recently arrived benches in Fore Street. Music and singing competed the entertainment. At some time in the not too distant future, some of this may be appearing in a Mary Portas series on Channel Four. I sincerely hope any footage of me is edited out.