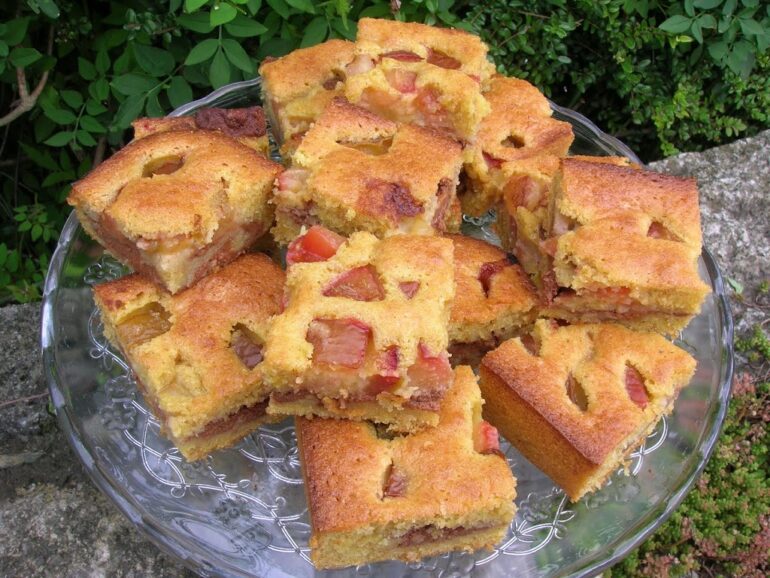 Dom from Belleau Kitchen has put a jinx on me. He left a comment about finding my misreading of recipes rather endearing. The cheek of it! Mostly, I choose not to follow recipes as I prefer to go my own way. But ever since he said that, I have indeed misread them and today was no exception.

The friends we visited last weekend, the ones who munched their way through my chocolate courgette cake, gave us a bag of Victoria plums from their holiday let garden – mmmmmm. I wanted to make something a little more interesting than CTs suggestion of a crumble – not that I have anything against crumble. But I was looking for a way to get both rose and chocolate into it as a Plan B for We Should Cocoa. Just in case Plan A didn’t happen.

I spotted a plum traybake recipe from Waitrose and it sounded interesting. Especially so as we had some of CTs homemade kefir cheese that needed using up. All I needed to do, was to substitute the vanilla for rose and make the cheesecake a chocolate and kefir one. However, as it turned out, I didn’t do it quite as I’d meant to.

It wasn’t until I’d made the cake and re-read the original recipe, that I realised I was meant to put one of the eggs in the cheesecake – oops! So it turns out this plum chocolate cheesecake traybake is my own creation after all.

Despite, the mishap with eggs, the result was truly scrumptious. It started with a lovely fruity hit, both sweet and tangy, then came the unctuous creamy chocolatey bit. The rose was very subtle, but left a lingering memory long after the cake had disappeared.

Thanks for visiting Tin and Thyme. If you make this plum and chocolate cheesecake traybake, I’d love to hear about it in the comments below. Do share photos on social media too and use the hashtag #tinandthyme, so I can spot them.

If you’d like to see more traybake recipes, follow the link and you’ll find I have quite a lot of them. All delicious, of course.