A sweet, fruity, crisp and chewy recipe for blackberry and apple crumble bars. An autumnal delight made with wholemeal flour and oats for a slightly healthier take on the classic crumble bar. They’re super delicious and ever so easy to make. 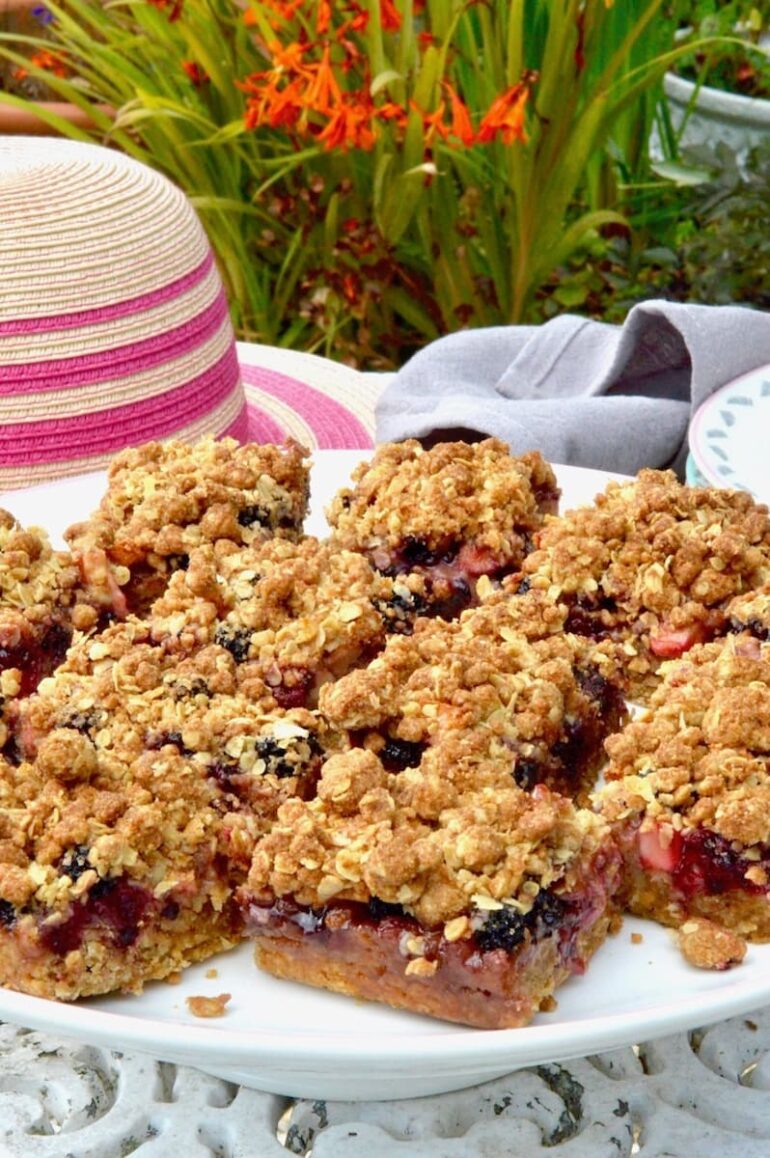 Blackberries are one of the high points of autumn. This year seems to have been particularly abundant and I’ve been picking wild blackberries for weeks now. But don’t fret if you can’t find any to forage for yourself. You can buy cultivated blackberries quite easily these days and frozen ones will also work.

The base layer and crumble topping are spiced with cinnamon. The spices are quite subtle, but they really enhance the apple and blackberry flavours.

Despite the sugar, these bars are quite wholesome with lots of nutritious apples and blackberries. As well as oats, they’re also made with wholemeal flour. I use wholemeal spelt flour, as it’s my favourite for baking.

The crisp topping softens once stored, but these bars remain wonderfully good to eat. However, if you like the idea of serving these blackberry and apple crumble bars warm as a dessert, just spoon the mixture into bowls straight from the oven and serve with cream or custard.

Whilst I normally bake these bars in a conventional oven, I baked the ones you can see here in my new air fryer. They’re just as good, in fact the crumble topping is even crisper.

It’s a good idea to make the base and topping first. If you do it the other way around, the fruit has a chance to emit its juices and thus make the bars a bit soggy.

Step 1. Make The Base And Topping

This part of the process is really quick and easy to execute. First off you need to melt some butter in a pan over a low heat. Once this is done place the flour, oats, light brown sugar, cinnamon, baking powder and salt into a large mixing bowl.

Pour in the butter and stir with a fork or wooden spoon until everything is well mixed.

Remove roughly one third of the mixture and place in another bowl. Set aside. This will be the crumble topping.

Break the egg into the remaining two thirds and stir with a fork or wooden spoon until everything is well combined. Don’t worry if it doesn’t look like dough, the mixture is meant to be crumbly at this point.

Wash the blackberries in a bowl of cold water, then place in a sieve or colander to drain.

Peel and core the apples, then chop them into roughly one centimetre chunks (a bit less than half an inch). Place them in a medium sized mixing bowl and add the apple cider vinegar or lemon juice immediately. Give a good stir so that the fruit is coated. This should prevent them going brown.

Prepare the apples one at a time, so that you can coat the pieces in vinegar or lemon juice as soon as possible. They will go brown if left exposed to the air for long.

Tip the blackberries into the bowl of apples, then add the sugar.

Add the arrowroot and ground cloves then stir carefully so as not to break up the blackberries. Stir until everything is just about mixed.

Arrowroot is a gluten-free thickening agent and does much the same thing as cornflour. But here’s the thing. It’s actively good for you (ref: healthline). You can, however, swap it for cornflour if you like.

Use a large metal spoon to stir everything together. Try for a folding action rather than a chopping one. This is less likely to break up the blackberries.

Tip the larger bowl of eggy crumble into the bottom of the baking pan. Press it down with the back of a spoon until it’s firm and in an even layer.

Spoon the filling, along with any juices, over the bottom layer. Try to make this as even a layer as possible.

Lastly scatter the non-eggy crumble over the top.

If you use a silicone mould, as I do, you’ll need to place it on a baking sheet before you start the assembly. If you try moving it on its own, the bottom layer is likely to break up.

Place the traybake on the middle shelf of your preheated oven and bake for thirty five minutes. The fruit should be cooked and the top crisp and golden. If it’s not quite ready, pop it back in for a further five minutes.

Place the baking pan on a wire rack to cool. Allow the bake to cool completely before cutting into bars. If you attempt to cut them whilst still warm, they’re likely to break up.

These blackberry and apple crumble bars keep well in a sealed container in the fridge for five days. The topping will, however, no longer be crisp. But don’t let that put you off, the bars are still really delicious.

When it comes to freezing, you can do that too. Bake, cook, cut into bars, place into a suitable container and freeze. They’ll keep well for a couple of months.

What Are The Best Apples To Use To Make Blackberry and Apple Crumble Bars?

What type of apples you use very much depends on whether you want them to stay firm or go soft. As the crumble bars are quite sweet, it’s best to go with tart apples if you can. Cooking apples, such as Bramleys, will go soft and form a sort of purée. Green dessert apples, like Granny Smiths, will keep their shape.

As I’m a frugal soul, I tend to use windfall apples at this time of year. But it’s a bit of a potluck. They could be cookers or dessert apples and either tart or sweet.

Although it’s hard to imagine these blackberry and apple crumble bars could be even better, variety is the spice of life. Or so they say.

Use coconut oil instead of butter. Then omit the egg and just pack down the bottom layer very tightly with the back of a spoon.

Add a few chopped hazelnuts to the crumble topping for an even more delicious autumn treat. If you’re lucky, you can find blackberries, apples and hazelnuts in the hedgerows at more or less the same time.

Use an additional 150g of blackberries and omit the apples. Swap the cinnamon for the grated zest of a lemon.

For apple crumble bars, use 350g of chopped apples and no blackberries.

The cinnamon and clove spices are quite subtle in these blackberry and apple crumble bars. I wanted the fruit to shine and the spices to enhance rather than dominate. But if you really like cinnamon, by all means add an extra quarter or even a half teaspoon to the mix.

By way of a change, you could swap the cinnamon for British mixed spice or American pumpkin pie spice. And nutmeg works well in the fruit mix, so you could use that instead of cloves.

Thanks for visiting Tin and Thyme. If you make these blackberry and apple crumble bars, I’d love to hear about it in the comments below. And do please rate the recipe. Have you any top tips? Do share photos on social media too and use the hashtag #tinandthyme, so I can spot them.

If you’d like more traybake recipes, follow the link and you’ll find I have quite a lot of them. All delicious and nutritious, of course.

Use frozen blackberries if you can’t get hold of fresh ones.Add a few chopped hazelnuts to the topping for additional autumnal deliciousness.Will keep well for five days in the fridge if kept in a sealed container.Please note: calories and other nutritional information are per serving. They’re approximate and will depend on exact ingredients used.

I’m sharing this recipe for blackberry and apple crumble bars with Carrie’s Kitchen for #CookBlogShare.

Previous Post: « How To Make Your Own Prunes & An Air Fryer Review
Next Post: Courgette Corn Soup With Vegan Pesto »