Lightly spiced, but rich in flavour, this plant-based courgette and corn soup is beautifully smooth and unctuous. Combine it with kernels of roasted sweetcorn and you get added interest and a hefty flavour boost. It’s a particularly good recipe for those extra large courgettes you’re not sure what to do with. If you omit the vegan pesto at the end, the soup becomes totally fat free, but it’s still delicious. Who needs chowder? 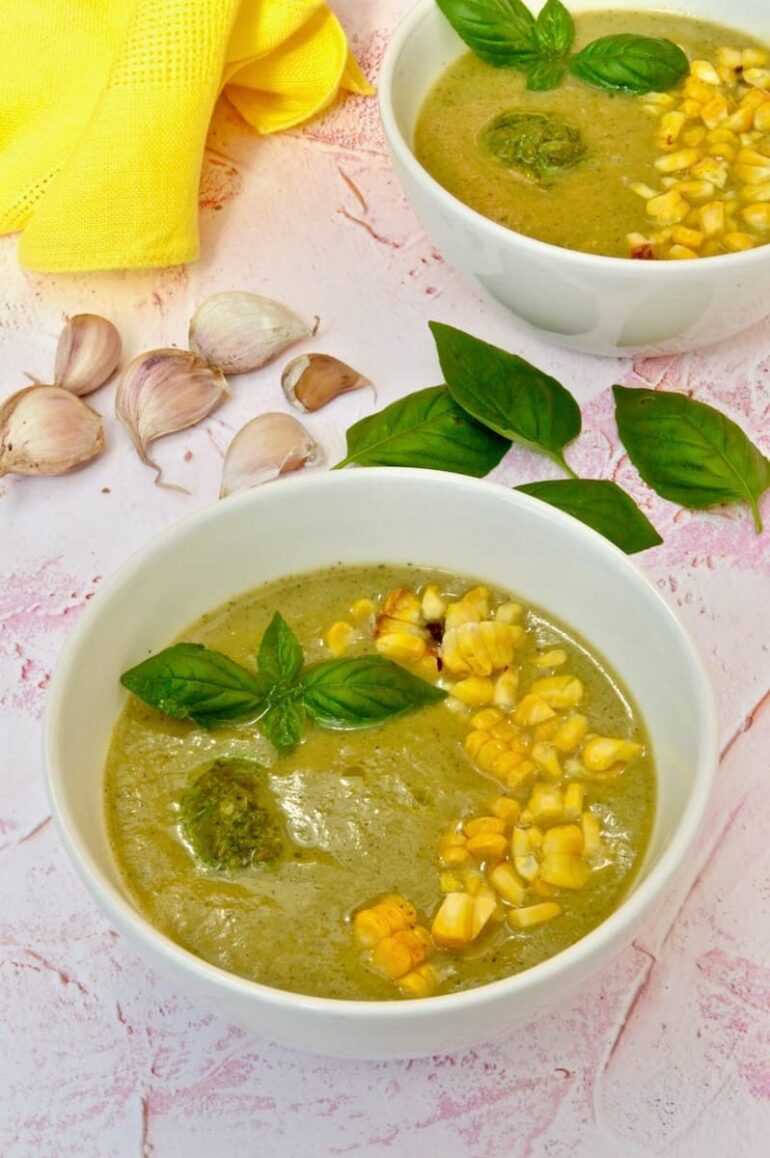 I make a lot of courgette (zucchini) soup at this time of year. We think our courgette plants have stopped producing so we forget about them and then much to our surprise we find a marrow. Why we’re surprised I’ve no idea as it happens so regularly. Live and learn. Not.

Anyway, as long as courgettes are just big and not old and seedy, they’re perfectly good for soup. Here’s one of my courgette soup recipes.

Late summer and early autumn courgettes marry beautifully with golden sweetcorn. I know these two vegetables go well together from when I developed these courgette sweetcorn fritters a few years ago.

The plant-based soup is really easy to make, especially if you have a soup maker and an air fryer. I’m lucky enough to have both, but you don’t actually need either.

I like to make the soup in my power blender which doubles up as a soup maker. It blends the soup so finely that it makes it almost velvety and even more flavoursome. It also means there’s no need to fry anything first and you can have a fat-free soup which still tastes delicious.

Granted, I’ve added a teaspoon of vegan basil pesto to each bowl of soup in this recipe and that does contain oil. But it’s almost as good without it.

The only spice I’ve added to the soup is sumac. Its bright lemony tones go really with courgettes and its fairly mild flavour doesn’t dominate. If you don’t have any, don’t panic. Just stir in a squeeze or two of lemon juice at the end.

Enjoy with crusty bread, vegan wholemeal scones or eat just as it is. Either way, this courgette corn soup is a nutritious bowlful of deliciousness that you’ll enjoy whether you’re vegan or not.

Remove the kernels from one of the corn cobs with a sharp knife. Place the kernels in a large lidded pan along with the chopped onion, courgettes and garlic. Add the stock powder, sumac, salt and pepper. Finally pour in the water.

Place the lid on the pan, bring to the boil then simmer for twenty minutes.

Use a jug or stick blender to make the soup as fine and smooth as possible.

Alternatively use a soup maker instead and follow the manufacturers instructions. If you’re doing this, add the water last and make sure it doesn’t go above the maximum level.

As you’re going to blend the soup when it’s finished cooking, you don’t need to chop the vegetables particularly small. Bite size chunks are fine.

Whilst the soup is cooking, prepare the sweetcorn. If you’re using an air-fryer all well and good, but if you’re roasting your corn cob in the oven, you’ll need to preheat it to 220℃ (200℃ fan, 425℉, Gas 7) before you start doing anything else.

It’s best to get the corn roasted and then cool enough to cut off the kernels before the soup is ready to serve.

Unless you’re going oil-free, rub a small amount of olive oil over the kernels. Then roast for fifteen minutes, turning the cob half way through cooking.

Allow the cob to cool a little, then cut the kernels off with a sharp knife.

Pour the soup into bowls, add a teaspoonful of vegan pesto then scatter the roasted corn kernels over the top. Add a sprig of basil as a final flourish if you like.

Vegan pesto can be just as delicious as traditional pesto. Just swap the cheese for nutritional yeast. I’m a bit fussy about vegan cheeses and haven’t yet found one I’m happy with. I don’t like all the additives they seem to have in them. That’s why I stick to nutritional yeast. But by all means use vegan cheese to make this pesto instead, if you prefer.

The vegan basil pesto is optional, but adding a spoonful to each bowl of soup adds another gorgeous layer of flavour and nutrition. As long as you have a blender, it’s very easy to make.

If you’re making the soup in a power blender that also makes soup, use it to make the vegan pesto first. Then scrape as much of the pesto out as you can. Add the courgette and corn soup ingredients and any leftover pesto gets incorporated into the soup.

How To Make Vegan Basil Pesto

If you’re using cashew nuts, soak them in water the night before. Give them a good rinse and drain before you use them. Soaking activates nuts and removes some of the enzyme inhibitors that makes them difficult to digest. It also makes for a creamier pesto.

Courgette Corn Soup: Change It Up

I’ve already given a few options for both making this delicious vegan soup and what ingredients to use. However, there are a number of additional options you might like to try.

Do You Need To Peel Courgettes?

People often ask if you have to peel a courgette. The answer is emphatically no. Courgettes are summer squashes, so they’re actually immature fruit. This means the skin is soft and perfectly edible, even raw.

The skin also holds most of the courgette’s nutritional qualities, so it’s not a good idea to throw that skin away. Even when baking cakes, there’s no need to peel them. You can see this in action in my courgette cake with lime and mascarpone frosting.

Can You Eat The Whole Courgette?

As mentioned above, courgette skin is not only edible, but it’s a positive benefit. Any developing seeds will be soft as they’re not fully formed, so they’re edible too. In fact the whole of the courgette is entirely edible, except for the ends. Just trim those off.

The smaller the courgettes are, the more tender they will be. Large overgrown courgettes are good for stuffing or making into soup, such as this courgette corn soup.

If, however, your courgette is really old, the skin may have toughened and the seeds hardened. In other words it’s turned into a marrow. This you will need to peel and you’ll need to remove the seeds too.

What To Do With Spent Corn Cobs

Corn cobs can be expensive, so you probably don’t want to waste them. Even if you grow your own, you’ll have put a lot of time and effort into the process. So, once you’ve taken the kernels off your cob, use those spent cobs to make a sweet and golden vegetable stock.

Place them in a large pot, cover with water, add a pinch of salt and bring to the boil. Cover the pot with a lid and simmer for an hour.

Use the stock to make soups, stews, veggie chilli, pasta sauces and polenta.

As demonstrated above, I’m a frugal cook and can’t abide waste. So one of my top tips to make the best use of resources is to add a little water to any finished jars or bottles of pastes or sauces. Put the lids on, give them a good shake and add that water to soups for a “free” flavour boost.

Thanks for visiting Tin and Thyme. If you make this courgette and sweetcorn soup, I’d love to hear about it in the comments below. And do please rate the recipe. Have you any top tips? Do share photos on social media too and use the hashtag #tinandthyme, so I can spot them.

If you’d like more soup recipes, follow the link and you’ll find I have quite a lot of them. All delicious and nutritious, of course.

Lightly spiced, but rich in flavour, this soup is beautifully smooth and unctuous. Combine it with kernels of roasted sweetcorn and you get added interest and a flavour boost. It’s a particularly good recipe for those extra large courgettes you’re not sure what to do with. If you omit the vegan pesto, the soup becomes totally fat free, but it’s still delicious.
Prep Time10 mins
Cook Time30 mins
Total Time40 mins
Course: Lunch, Supper
Cuisine: British
Keyword: courgettes, easy, soup, sweetcorn
Servings: 4 people
Calories: 73kcal
Author: Choclette @ Tin and Thyme

Make this soup the traditional way on the stove top, with a pressure cooker, a slow cooker or a soup maker.For a little extra richness first fry the onion and garlic gently in a little olive oil. Then add the remaining ingredients.Can omit the roasted sweetcorn and corn cob and use 200g frozen or tinned sweetcorn in the soup instead.

I’m sharing this recipe for courgette and sweetcorn soup with Sew White for #CookBlogShare.