Sweet and squidgy caramelised blueberry blondies made with British blueberries. Flavoured with lemon and white chocolate, which caramelises as it cooks. 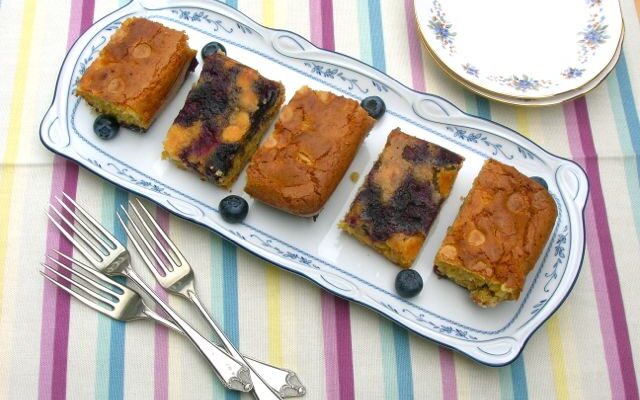 Homegrown berries are aplenty at this time of year. But did you know you can get British blueberries too? They’re generally available from June right through to September, which makes them a reliable fruit for summer baking. These berries are full of antioxidants and phytonutrients, so you can feel thoroughly virtuous when you tuck in. They taste good too.

The British blueberry season is still in full swing, well maybe not quite full swing, but my mother is still picking blueberries here in Cornwall, so there are certainly some around. Blueberries pair very nicely with white chocolate, so when I was commissioned to create a recipe for Wayfair last month, I used this combination to make some caramelised blueberry blondies.

For those not in the know, Wayfair is an online outfit selling furniture and other household items. Both the cloth and rectangular plate featured in the photographs came from this establishment.

The blueberry blondies, inspired by these raspberry blondies I made last year, are sweet and squidgy with a beautiful colour as well as flavour from the blueberries. The addition of lemon zest gives a delightful citrus zing. The piece de resistance, however, is the white chocolate which caramelises whilst cooking giving a crunchy and very tasty crust.

Head over to Wayfair to see my recipe and step-by-step photos for caramelised blueberry blondies.

Thanks for visiting Tin and Thyme. If you make this recipe for caramelised blueberry blondies, I’d love to hear about it in the comments below or via social media. Do share photos on your preferred social media site and use the hashtag #tinandthyme, so I can spot them. For more delicious and nutritious recipes, follow me on Twitter, Facebook, Instagram or Pinterest.

I’m sending these caramelised blueberry blondies off to Recipe of the Week with Emily at A Mummy Too.

Previous Post: « Apple Crumble and Custard Cakes
Next Post: A Day at River Cottage on the Devon Dorset Border »