A refreshing salmon pink citrusy smoothie to energise and give you that sunshiny feeling. Who could resist this easy to make sunshine pink grapefruit smoothie? 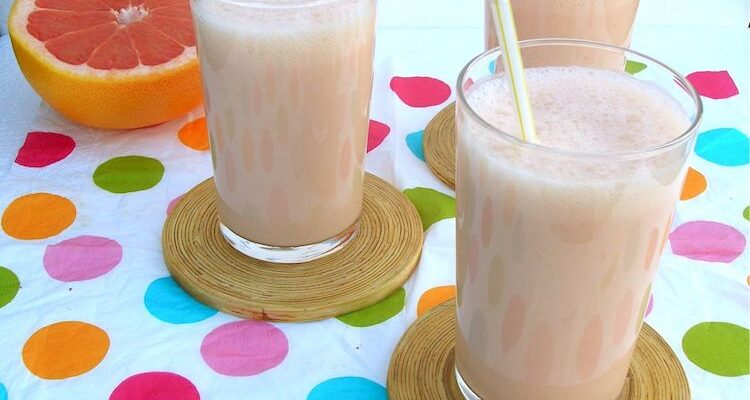 Grapefruit grows in many places and although there’s plenty of sunshine here at the moment, Cornwall isn’t one of them. Florida, however, is a different story. Citrus fruit thrive in Florida’s sub tropical climate and they’ve grown grapefruit there since 1823.

Many of us in the UK blame rain and cold weather for making us feel dull and unproductive in the winter, but perhaps we just need some of that captured sunshine to give us a much needed boost? Cue sunshine grapefruit smoothie.

The Power of Grapefruit

Well known for being high in vitamin C, grapefruit also has significant amounts of vitimin A and potassium as well as a number of other trace elements. Vitimin C is a powerful antioxidant and among other things also helps us to absorb iron into our bodies. Vitamin A is another strong antioxidant and is good for immune health and potassium plays an important part in keeping our cardiovascular system fighting fit.

Smoothies are one of our breakfast staples and since acquiring my wonderful high speed blender, they have overtaken our sourdough rye toast in popularity. Until I was contacted by Florida Grapefruit, I had not thought of including this particular fruit in a smoothie. Along with a goodie bag of grapefruit inspired items and a voucher to buy some ingredients, I was also sent some drink recipes to try. Red Sunshine Shake and Grapefruit Heaven both sounded delicious and I expect I will give them a whirl one of these sunshiny days, but it was my morning smoothie I was most interested in.

The recipe for Sunshine Grapefruit Smoothie used yoghurt, but as we seem to produce copious amounts of kefir, I used that instead. The weather is balmy with not a cloud to be seen, but it’s still a little too early in the year for me to want ice-cold drinks for breakfast. So I omitted the ice from the smoothie and used an unfrozen banana. The recipe below is the original. But the result of my salmon pink version was pure delight. Delicious, smooth and refreshing and not a bit of grapefruit skin to be found.

For a dairy-free or vegan version of this grapefruit smoothie, just swap the yoghurt in the recipe for a plant-based one.

Thanks for visiting Tin and Thyme. If you make this sunshine pink grapefruit smoothie, I’d love to hear about it in the comments below. Do share photos on social media too and use the hashtag #tinandthyme, so I can spot them.

For a dairy-free or vegan version, just use a plant based yoghurt instead of the non-fat yoghurt or kefir.Please note: calories and other nutritional information are per serving. They're approximate and will depend on exact ingredients used.

I use the Froothie Blenders for smoothies, spreads, sauces and even chocolate making. The post contains affiliate links. If you buy through a link it won’t cost you any more, but I’ll get a small commission. This helps to keep Tin and Thyme blithe and blogging. Opinions are, as always, my own.