My First Cookbook and a Recipe for Chocolate Drops 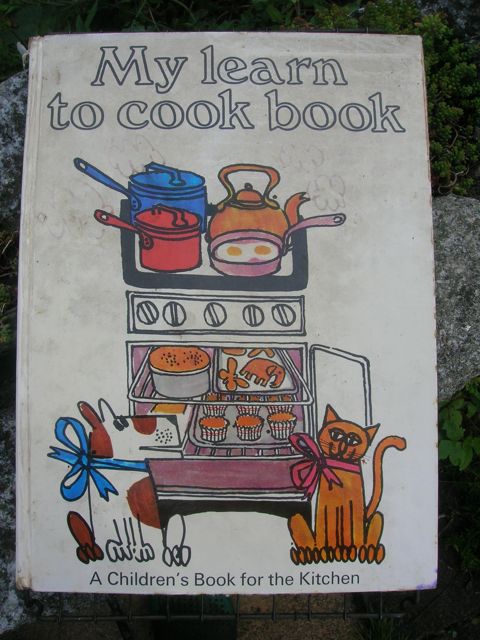 This is a simple recipe for old-fashioned chocolate chip cookies, which were then called chocolate drops. It’s from my first cookbook and is meant to be easy enough for young children to make.

This post is a bit of indulgence. I have a heap of posts waiting to be published or written that should be taking priority. But rather unexpectedly, I was able to lay my hands on my first cookbook last night and couldn’t resist baking something from it this morning. Claire at Foodie Quine is to blame for this little renaissance. She got rather excited about finding a copy of her first cookbook, wrote a post about it highlighting a few other first cookbooks and is now hosting an event this month for bloggers to post about theirs.

It just so happens that Janice of Farmergirl Kitchen has the very same book as mine – My Learn to Cook Book: a children’s book for the kitchen by Ursula Sedgwick with fabulous and much loved illustrations by Martin Mayhew. We both still have our original copies, although mine resides at my mother’s and we were both given our books as a present from a Great Aunt. Mine was given as a Christmas present when I was eight and I immediately set to and cooked my way through the entire book. I don’t think there’s a recipe there I didn’t attempt, some with more success than others. 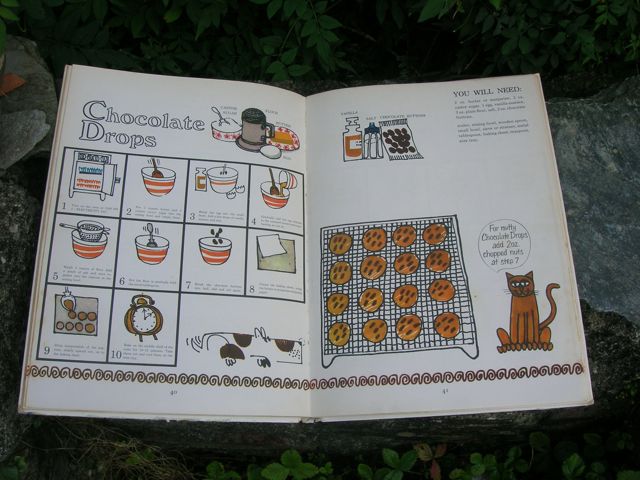 You can tell which recipes I used a lot by the copious staining on some pages. The page for zoo biscuits is almost completely blue from the food dye I used to paint the biscuits. Some recipes such as the chocolate mousse I carried on using well into my adulthood. Some recipes are frankly, a little bizarre. The fruit fried sandwich, which is two slices of bread sandwiched together with bramble jelly and grated apple and then fried in butter is not something I find immediately appealing. On the other hand, I’ve just made some bramble jelly and I have a house full of apples. So watch this space.

What are your first cookbook memories? I’d love to hear them. 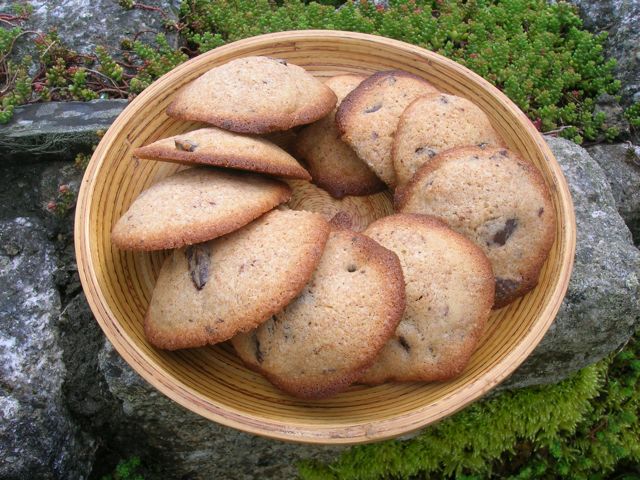 A couple of years ago, I made crispy crackolates from the book for the first time in many a long year. This time, I decided to have a go at the Chocolate Drops – more commonly recognised nowadays as choc chip cookies. My version is a little bit more sophisticated than the original. I used wholemeal spelt flour and Willie’s Venezuelan 72% chocolate drops for an added wow factor and because I’d just managed to get some on special offer. If you’re making these with kids, you may want to use milk chocolate drops instead.

Although the book gives fairly explicit instructions most of the time, it does let you down on occasion. I had no clue as to how many biscuits the mix was meant to make. As I was in a bit of a hurry and didn’t want to have to prepare more than one baking tray, I heaped mine up into 12 mounds which made for crispy edges and a chewy middle. Sixteen would have made a better and flatter size, but you live and learn or at least that’s what you’re meant to do. 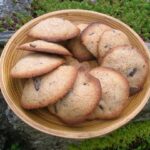 For smaller crunchier cookies, make 16 smaller mounds rather than 12. Adapted from My learn to cook book by Ursula Sedgwick

Thanks for visiting Tin and Thyme. If you make these chocolate drops or have memories of your first cookbook, I’d love to hear about it in the comments below or via social media. Do share photos on your preferred social media site and use the hashtag #tinandthyme, so I can spot them. For more delicious and nutritious recipes, follow me on Twitter, Facebook, Instagram or Pinterest.