When I came across a recipe for malted cookies by Ruby Tandoh in the Guardian one week, there was no doubt I would have to make them. I adore anything malty, be it malt loaf, Horlicks or Maltesers. This was a recipe to be torn out and kept. Of course when it came to it, I had to change it a bit, adding wholemeal flour and chocolate were a must. I didn’t want to have egg whites floating around the place, so I used a large whole egg instead of yolks only. I also changed the quantities, 8 large biscuits or 14 small ones just didn’t seem enough, especially as I wanted to take them up to the New Forest with us on a visit to CT’s mother. 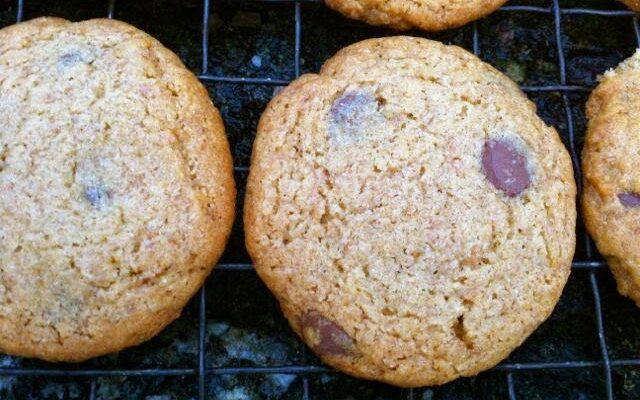 Warm from the oven, these made me one very happy person. Once cooled they were crisp on the outside and soft and chewy on the inside. Maltesers in biscuit form. Comfort food exemplified. Need I say more?

I am sending these over to Laura at I’d Much Rather Bake Than … for her Biscuit Barrel event. She has chosen favourites for this month’s theme and as I’ve already mentioned malty flavours are a firm favourite of mine.

As I bookmarked this recipe the moment I saw it, I am sending this off to Bookmarked Recipes with Jac of Tinned Tomatoes.