A quick and simple traybake, this Victoria plum cake with white chocolate is light, moist and flavoursome. Tart plums contrast deliciously with caramelised white chocolate and a spicy waft of cinnamon.

Last week’s foraging expedition in my mother’s garden yielded a handful of Victoria plums amongst other things. Initially, I was going to make a plum tart with them, but then I saw Ren Behan’s easy English plum cake recipe and thought I would adapt that instead.

I had to get chocolate in there of course and white seemed like the best bet to go with plums. I used my usual mix of half white and half wholemeal flour and made a couple of other minor adjustments.

The cake rose beautifully producing a light and moist sponge. The chunks of white chocolate caramelised giving a delicious occasional nugget of sweetness. What a gorgeous contrast to the tart plums. Unfortunately they sank along with the chocolate. I’d been expecting them to be visible from the top giving added interest and a nice colourful appearance. The best laid plans. Next time, I’ll lay them gently on the top and not press them into the batter at all.

The cinnamon topping was a stroke of genius on Ren’s part. It gives a gorgeous spicy scent as well as an additional flavour and it works particularly well. This is such a simple and quick cake to put together with such good results, I must remember to use it again.

Thanks for visiting Tin and Thyme. If you make this Victoria plum traybake, I’d love to hear about it in the comments below. Do share photos on social media too and use the hashtag #tinandthyme, so I can spot them.

If you’d like to see some more cupcake recipes, I have quite a few of them. 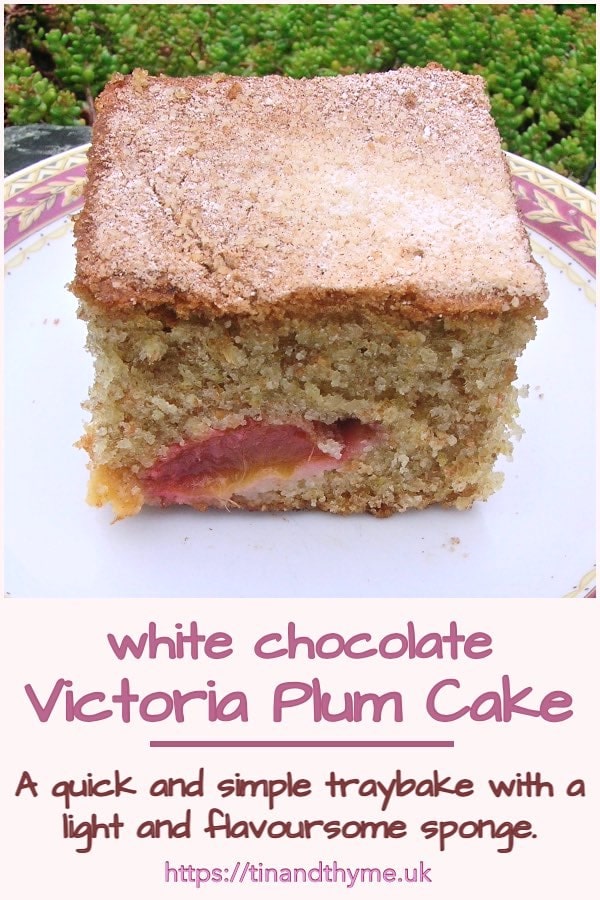 Ren Behan has entered her English plum cake into a competition whereby she needs people to bake her cake and then upload a photo of it to Cook’d. Do try it if you can. There might even be prizes for those taking part.

This month’s One Ingredient is plums. It was chosen by Nazima of Franglais Kitchen. I didn’t manage to enter last month’s cucumber challenge, so I was keen to get in there with my Victoria plum traybake this month.

I’m also sending this plummy bake over to Bookmarked Recipes run by Jac of Tinned Tomatoes.