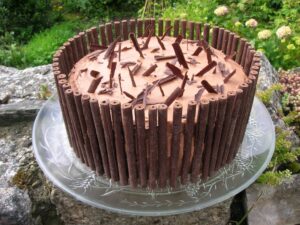 It was a special occasion, a friend’s significant birthday, so a very special cake was called for. Since trying my matcha battenberg and hearing how many health benefits are attributed to matcha, my friend has been interested in acquiring some. Because of the elaborate process required to make matcha, it is not a cheap product to buy. So when Vitalife sent me a packet of cooking grade matcha to play with, I was delighted. I also thought using it to make a cake for said friend was the way to go. That was as far as I’d got in my thinking until I saw the very large birthday cake Dom recently made. He’d used chocolate cigarillos to edge his cake and it was an idea I was happy to pinch. To be fair, I had already decided a while back I would try decorating a cake this way after having seen Lorraine Pascale do it, but then I forgot about it – as I do. Dom reminded me with a vengeance and was also gracious enough to give me a link to the site where he obtained his cigarillos. That’s how a box of very fragile chocolate tubes arrived in the post. Tantalisingly, I could smell the chocolate emanating from the box as soon as I opened it – something I take to be a sign of good chocolate. Many of them were broken, which was a bit sad, but I had been warned on their website that this was a strong possibility. So not losing heart, I thought I’d use the broken bits to go on top of the cake. However, it wasn’t until they came that I registered their length – a massive 10 cm – ouch!

Well, I did want to make this cake particularly memorable, so the answer I reasoned was to make a triple layer cake and hope that would be high enough. Now, what to use to fill and coat it? I put a lot of thought into this one and changed my mind along the way. I was looking for contrast against the dark cigarillos. At one point I thought I’d use a matcha buttercream to coat the cake with; green looks quite striking contrasted against dark brown. On reflection though, I thought too much matcha would be overpowering, especially for people who may not have had it before, so I scratched that one. In the end I decided to go for a dark chocolate ganache to fill the layers and a light chocolate buttercream to coat the outside ending up with three contrasting colours. I’ve never made three layers before, so it was with a certain excitement that I set to with the following recipe.

Overall, I was pleased with how the cake turned out, but I was not as thrilled as I might have been. When cooking two of the cakes together in the oven, I’d tried to be clever and swap their shelf position over half way through cooking – big mistake; the cakes didn’t rise properly. You can see the difference in the picture – the cake cooked on its own was fine. This of course meant the cake wasn’t as tall as I’d envisaged it, so after all that, the cigarillos were still a bit too high.

Anyway, though I say it myself, the cake looked pretty splendid and I think everyone was impressed with it. The birthday girl was certainly pleased.