It’s been a while since I did any baking with matcha. Last week provided the perfect opportunity. We’d been invited to eat sushi with a Japanese colleague of CT’s which I was hugely looking forward to. A few little matcha cakes, I thought, would make a suitable post prandial snack.

As I mulled over what flavour I should pair the matcha with (mostly in the early hours of the morning) I kept coming back to citrus which I thought would give a fresh and zingy high to the bitter notes of green tea. But, unusually for me, I had no fresh citrus in the house, not even lemons.

With time fast running out I made a last minute decision to add some of my mother’s marmalade to the mix. Two bitters together can work really well – think coffee and chocolate. I was hoping this would also provide some of the zing I was looking for.

Well I couldn’t have been better pleased with how these mini matcha marmalade cakes turned out – well maybe they could have been a bit greener in colour. They were light in texture, greenish, had a mild matcha flavour and a delicious marmalade hit. CT and I were hard pressed not to snaffle one on the train on our way to our hosts. Just as well we didn’t as they all disappeared with remarkable rapidity.

How anyone managed to fit them in is a miracle. We had the grandest sushi spread I’ve ever come across. It was a self-assembly job; nori seaweed was provided along with what seemed like hundreds of fillings. As the only vegetarian there, I was still well catered for – omelettes, mushrooms, cucumbers, natto, asparagus, okra, radishes, beans, cress and all the usual accompaniments and condiments. Four hours of eating and sake drinking and we were still able to knock back a few cakes and lashings of a flowering green tea.

My matcha marmalade cakes were not the only desserts. There was a lush chocolate cake as well as a banana tarte tatin. How we managed to stagger back to the train station and home I’ll never know.

I’ve named this year Super Sushi. I reckon I’ve eaten more of it this year than all the other years combined. It all started with our bloggers session at Yo Sushi and snowballed from there. Only two days after this sushi feast I got a surprise phone call from a friend who was dashing through Plymouth on his way back to Italy. “Can you make it to Koishii for a Japanese blow out in two hours time?” I dropped everything, so did CT.

I’m sending these off to Elizabeth’s Kitchen Diary for Shop Local as the wholemeal flour is Cotehele Mill’s own, the eggs are local as is my mother’s homemade marmalade.

As these were sort of made as a thank you for inviting us over for sushi, I am sending this off to Treat Petite with CakeyBoi and The Baking Explorer.

It’s been a while since I submitted anything to #recipeoftheweek over at A Mummy Too, so off these go.

Thanks for visiting Tin and Thyme. If you make these scrummy little matcha marmalade cakes, I’d love to hear about it in the comments below or via social media. Do share photos on your preferred social media site and use the hashtag #tinandthyme, so I can spot them. For more delicious and nutritious recipes, follow me on Twitter, Facebook, Instagram or Pinterest. 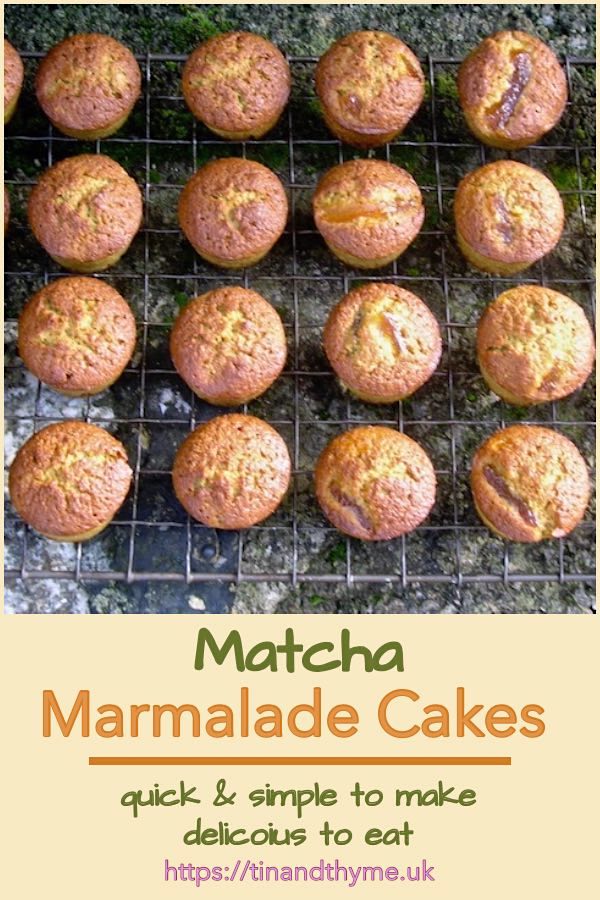 Makes 24 mini cakes or 12 regular bun sized ones. Please note: calories and other nutritional information are per serving. They're approximate and will depend on serving size and exact ingredients used.