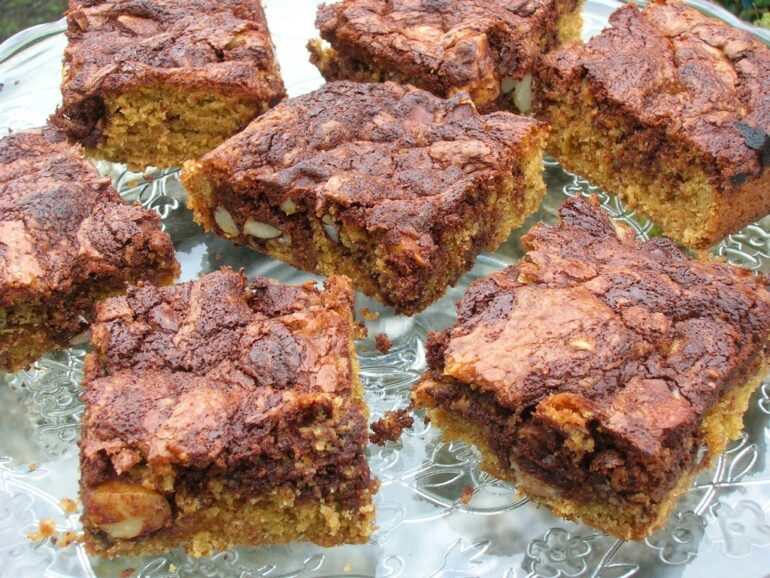 I discounted all of my recipe books that weren’t totally dedicated to chocolate. I gave a number to each of my eight chocolate books, ahem, yes I do have eight books completely dedicated to chocolate. At this point nerves set in. Having just got back from a few days away, I didn’t have much time; what if I got something complicated or wholly inappropriate or ……..? OK – deep breath. 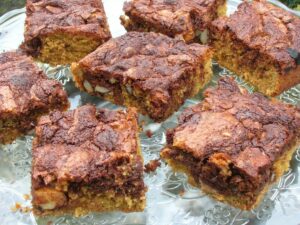 I asked CT to choose a number between 1 and 8. Number 3 gave me Linda Collister’s, Divine. I breathed a sigh of relief; although not ruled out, the chances of getting a really challenging recipe were significantly lessened. CTs second task was to close his eyes, flick through the book a few times and then stick his finger on a page chosen at random. Another sigh of relief on my part; he came up with a brownie recipe – yeah, I could do that. Apart from using wholemeal spelt, the only adaptions I made to Linda’s recipe was to use 85% dark chocolate rather than 70% and to add a pinch of salt. 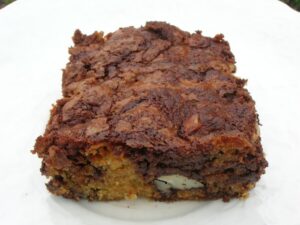 This was not the easiest brownie recipe I’ve ever made. For me one of the joys of brownies are that they are so quick and easy. This one involved creaming butter (hard from the fridge) and sugar, which always involves a bit of muscle power and time. I’m not sure this really made much difference, but unless I make them again using my method, I’ll never be sure – hmmm, not a bad idea though!

These brownies were a success. Visually they were interesting with their marbled effect creating an attractive colour contrast. They had the classic crispy top, were sweet with a butterscotch flavour and tasted delicious with an occasional hit of chocolate on the tongue. They were moist and the crunch of brazil nuts gave an interesting contrast in texture. But, for me they were just a bit too light to be thoroughly enjoyed as a brownie – a true brownie should be dense and gooey.  CT liked the convoluted surface and enjoyed the toothy crunch from the Brazils Filling.