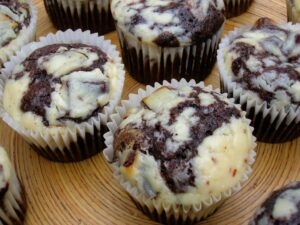 Black bottomed cupcakes seem to have been much talked about recently, but as I wasn’t exactly sure what they were I managed to remain unruffled. However, having seen this Hummingbird Bakery recipe recently in an old magazine, I had to make it for sure. Chocolate cake marbled (sort of) with cream cheese and lumps of milk chocolate – what an inspired mix! I hunted down the recipe, finding it at Delicious Magazine, then set to.

This is what I did:
I tried really hard to follow the recipe, but as regular readers will know, I find this difficult and usually end up changing something. This time, the only adjustment I intended to make was to reduce the amount of sugar in the cheese filling and to use vanilla sugar instead of extract in the chocolate cake. However, things did not go according to plan. The quantities were a little odd and didn’t really work. The chocolate cake mixture ended up being a rather stiff paste rather than the dropping consistency I was expecting. I just added a lot more water and it seemed to work fine. This was the first time I’ve used the whisking method with dry ingredients and I don’t think I will be repeating it. It took me ages to get all the lumps out – sieving is much faster. Although I made the recommended cheese topping, I felt it would spoil the effect and it didn’t really need it anyway. So I’ve put that in the fridge to be used another time.

I was certainly very pleased with the results. I loved the look of these cupcakes, quite spectacular I thought – all black and white with bits of chocolate erupting out of them. They tasted really good too – a very light sponge, not overly sweet, with soft cheesecake lava surrounding the more resilient sweet chocolate pieces. CT thinks this is a geology lesson in a cupcake and suggests they should be renamed as Magma Cakes. The sponge is vegan friendly – the rest, you may have noticed, isn’t! A real winner this one – a future tea party special I think. I shall most certainly be making these again.
Previous Post: « Cornish Cake Crawl Down Penzance Way
Next Post: All is Not Lost in Lostwithiel – Photomontage »