Crisp on the outside, soft in the middle, oca latkes are a delicious way to enjoy this Andean tuber. The recipe has a traditional as well as a vegan option. Serve as a light lunch or supper with yoghurt and a green salad, or as a side to a main meal. They even make an intriguing dinner party starter and will almost certainly get a lively conversation going. 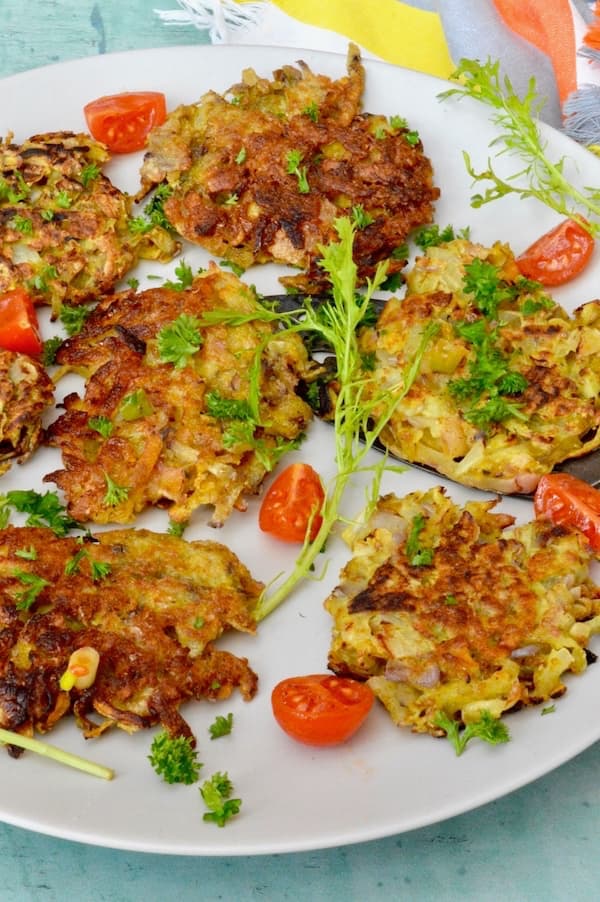 We all know about potato latkes, a stalwart of Jewish and Eastern European cuisine. But have you tried oca latkes? They’re fusion food at its best, where Eastern Europe meets the Andes.

Ocas (Oxalis tuberosa) are colourful starchy tubers that originate from high up in Bolivia and Peru. They’re a little like potatoes, with similar diverse characteristics. Some are floury, some are waxy, some are slightly sweet and some have varying degrees of lemon notes. Colours range from white to pink to orange to red to purple.

They’re still not particularly well known here in the UK, but interest in them grows year on year. In New Zealand they’re much more common and are known as the New Zealand yam.

How to Prepare Ocas for Cooking

If you buy ocas they should be fairly clean, so will only need a quick rinse in a bowl of water.

It’s a different story if you grow your own though. They can be quite dirty. The easiest way to clean them is to let them soak in a bowl of water for ten minutes or so to loosen any soil. Give the bowl a good shake and drain the water. We use this for watering plants. Repeat if necessary, then give them a quick scrub to ensure all the soil is removed.

Once you have clean ocas, they’re pretty much ready to use. You may need to nip off the bottoms if they still have roots attached. And as with any other vegetable, make sure you cut out any bad bits.

Latkes are a great way to eat this delicious vegetable. Latkes are essentially grated potatoes mixed with onion and fried in the form of fritters or pancakes. The idea is to get a nice crispy outside and a soft cooked inside. This is the oca version.

I make my oca latkes two ways. The first is the more traditional way using an egg as the binding ingredient. The second is a vegan version where I use chickpea flour to replace the egg.

Both are similar in texture, but the vegan version is more fragile. This means that when you turn the fritters over during cooking, they’re more likely to break up. So, more often than not I make one large oca latke instead of a bunch of smaller ones. I guess that makes it a Swiss rosti rather than an Eastern European latke. Turning this is a little tricky too, but if it does break up, you can squash it all back into the pan again and no-one is any the wiser.

We invariably eat oca latkes for lunch or supper, usually with yoghurt and a green salad. Sometimes I make a tomato salsa to accompany them too. However, they make a lovely side dish to a main meal and go really well with sausages. You can also serve them as a dinner party starter.

Although they’re best served hot from the pan, it’s fine to keep them in a warm oven for thirty minutes or so. Unless your pan is enormous, you can only fry four at a time, so it does take a bit of a while to cook the whole lot. Unless, that is, you make one large one.

How to Make Oca Latkes

Oca latkes are really quite a simple concept. They’re a mix of grated oca and onion with an egg and flour to bind them together and seasoning to bring out the flavours. They’re easy to make too, especially if you have a food processor to do the grating.

The first step is to grate the ocas and onion. Then you need to squeeze the gratings in a clean tea towel or muslin cloth to remove as much of the liquid as you can. The drier the ocas, the crisper the latkes will be.

Then mix all of the ingredients together. It’s best to let the mixture stand for ten minutes to allow the flour to swell. So whilst that’s happening heat up your oil. You need a good solid non-stick pan for this. A cast iron skillet is ideal. Heat it to a medium high heat, then pour in the oil.

Take spoonfuls of the mixture and place in the pan. Flatten into rough rounds with a fish slice. Fry until crisp and darkly golden on the bottom then flip over and fry on the other side. Repeat this process until all of the oca mixture has been used.

How to Make Vegan Oca Latkes

The process for making vegan oca latkes is more or less the same as above. The only difference is that you’re replacing the egg with chickpea flour. Just make a batter with the flour, water and seasoning before mixing in the grated oca and onion.

As mentioned above, the vegan latkes are a little more fragile to handle and turning them can be a little tricky. I find a one-pan rosti style easier.

Just pack the whole mixture into a hot oiled pan. Spread it out to the edges and flatten it down with a fish slice. As a rosti is much thicker than a latke, I cover the top with a lid to make sure the inside cooks through. Raw chickpea flour really isn’t very nice.

Once the rosti is cooked and golden on the bottom, turn it over as best you can. Don’t worry if it breaks up because you can pat it down again in the pan to form a round. Fry the other side with the lid on until cooked through.

Remove the lid and fry for a further two minutes to make sure any water evaporates and the rosti is crisp.

Place a serving plate over the top of the pan and invert onto the plate. Be careful, especially if using a heavy pan and make sure you use oven gloves.

The easiest way to remove the water from the grated oca and onion, is to squeeze it in a clean tea towel or muslin cloth. Gather the corners of the towel together, then twist the top with one hand whilst holding on to the bottom with the other. Keep twisting until you can’t get any more water out.

If you have a food processor, use that to grate the ocas and onion. It’s the easiest way and really quick into the bargain. You can use a box grater for both, but it’s quite hard work and will take much longer.

If you’re making vegan oca latkes, try using black salt instead of plain sea salt. It will provide eggy notes to the flavour.

The latkes are quite oily, so drain on kitchen paper for a couple of minutes before serving or placing in the oven.

If you cook more than you can eat in one meal, they’ll keep in the fridge for three days. Heat them up in a hot oven, or air fryer, for ten minutes before eating.

Thanks for visiting Tin and Thyme. If you make these oca latkes, I’d love to hear about it in the comments below. And do please rate the recipe. Have you any top tips? Do share photos on social media too and use the hashtag #tinandthyme, so I can spot them.

If you’d like more recipes from around the world, follow the link and you’ll find I have quite a lot of them. All delicious, of course.

Crisp on the outside, soft in the middle, oca latkes are a delicious way to enjoy this Andean tuber. Serve as a light lunch or supper with yoghurt and a green salad, or as a side to a main meal. They even make an intriguing dinner party starter and will almost certainly get a lively conversation going. Traditional and vegan options.
Prep Time15 mins
Cook Time30 mins
Total Time45 mins
Course: Lunch, Side Dish, Starter, Supper
Cuisine: Andean, Eastern European
Keyword: fritters, latke, oca, rosti, vegan
Servings: 16 latkes
Calories: 46kcal
Author: Choclette @ Tin and Thyme

You can do a straight swap and use potatoes instead of oca to make these latkes.Please note: calories and other nutritional information are per serving. They’re approximate and will depend on serving size and exact ingredients used.

I’m sharing this recipe for oca latkes with Lavender and Lovage for #CookBlogShare.