Delectable lightly spiced and fruited homemade vegan hot cross buns for Easter. With wholemeal spelt flour and only a little sugar, this recipe is healthier than many but doesn’t compromise on festive munchiness. As yeast buns go, these are some of the easiest to make. 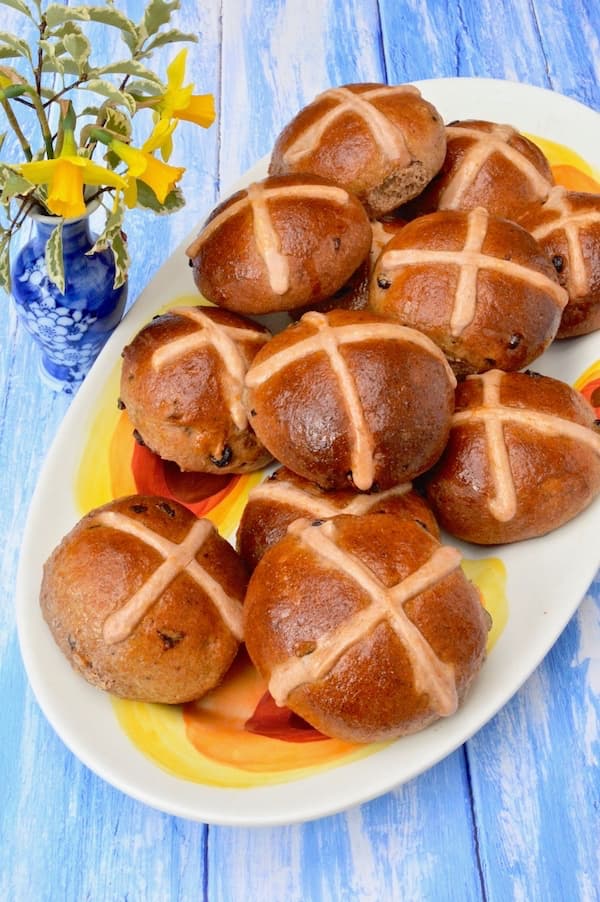 It’s getting close to Easter and it will soon be time to make hot cross buns. Homemade yeast buns are delicious and not at all difficult to make. So why not give this recipe a go?

Traditionally, we eat hot cross buns on Good Friday, although they seem to be available pretty much all year round these days.

The buns mark the end of Lent, when Christians are allowed to indulge in richer foods once again. The cross on top of the buns signifies the crucifixion of Christ, whilst the spices are said to represent those that were used to embalm him.

How To Make Vegan Hot Cross Buns From Scratch

Traditional hot cross buns are made with butter, milk and sometimes eggs. But there’s no reason why vegans should miss out. It’s actually really easy to make delicious hot cross buns without any of those ingredients.

These ones are made with wholemeal spelt flour. This means they’re not super light and fluffy, but they’re not in the least bit heavy either.

For a more traditional, non-vegan, recipe try this one, hot cross buns. Although, not quite so traditionally, they have a chocolate coloured cross on top rather than a white one.

The method isn’t really that much different from making traditional hot cross buns, except it’s a bit easier. You don’t need to rub butter into flour for a start. However, the main reason is that little in the way of kneading is required.

The most difficult part of the whole process is creating the crosses. But that’s just personal opinion, as I find piping a bit of a faff. You can see how to do this bit further down the post.

Start off by dissolving the yeast in warm milk. Once that’s done it’s pretty much a case of adding the wet ingredients to the dry ones until you form a dough.

It’s traditional to use currants for hot cross buns. They’re the smallest of the vine fruit, so you get more pieces of fruit per bun. That’s what I’ve used in this recipe. However, if you don’t like currants or don’t have any, it’s fine to use sultanas or raisins instead. Candied peel is also a classic ingredient. Sadly, CT is not a fan, so I use fresh orange zest instead. But if you like it, use it. See my top tip below.

These vegan buns really are one of the easiest yeast bakes to make. Wholemeal spelt flour is not strong on gluten, so it doesn’t require much kneading. For this recipe, you only knead these buns once and not for very long.

Five minutes, either by hand or machine is enough.

Once you’ve kneaded the dough, divide it into twelve pieces. Roll each piece into a ball and place a little apart on an oiled baking tray.

Cover the dough with a clean tea towel or place inside a plastic bag. You need something to keep the temperature stable and to stop the dough from drying out. If it dries out too much, the buns will form a skin which then prevents the yeast from working its magic.

Leave to prove until the buns have doubled in size. This usually takes about an hour, but will depend on exact room temperature as well as the state of your flour and yeast.

The buns will continue to rise for a bit once in the oven, so they will turn out bigger than they initially seem. The heat of the oven will kill the yeast, but it puts on a last minute burst before it goes.

Like most yeasted bakes, hot cross buns require a hot oven. This egg and dairy-free version is no different. So do ensure the oven is up to temperature before you put the buns in.

Once you’ve piped the crosses on, place the buns in the middle to top half of the oven. They’ll take about twenty minutes to bake, but check them after eighteen minutes. They should be nicely brown on top and sound hollow if you tap the bases. If they’re not done, place them back in the oven and give them a few more minutes.

You can create a steamy environment for the buns to bake in. This will help them to rise as well as keep them soft. See my top tip below.

Whilst the buns are baking, melt a little apricot jam with some water. Use this to glaze your buns as soon as they’re out of the oven. Just brush it over as much of the bun surfaces as you can reach.

Once out of the oven, transfer to a wire rack to cool. Unless, that is, you’re going to eat them immediately. This is highly recommended; they’re not called hot cross buns for nothing.

How To Make Crosses for Hot Cross Buns

All you need to make hot cross bun crosses is flour and water. Mix the two together until you have a stiff, but pipeable, paste. Use a piping bag to pipe crosses over the top of the buns. Alternatively, snip a small corner off a clean plastic bag and use that. It works for me.

Don’t worry if it all looks a bit messy, the buns will look much better once baked. Take a look at the photo above to see how untidy mine were.

Despite my whole food credentials, I use plain flour rather than wholemeal for the crosses. You really need stand out light colour to make the requisite impact.

For this recipe I used orange juice instead of water, but that is definitely not traditional. In fact I used my last blood orange, so the mixture is pink rather than white.

These wholemeal vegan hot cross buns are best eaten fresh, on the day of baking. They will last for five days if you keep them in an air-tight container, but you may want to toast them first or warm them in the oven before eating.

Can You Freeze Hot Cross Buns?

Yes you can freeze hot cross buns. Place them in a suitably sized freezer bag and freeze for up to six months. To prevent the buns drying out, allow to thaw in the bag before removing. Then eat them as you normally would.

This means that if you want to take them out individually, you’ll need to freeze them in separate bags.

Thanks for visiting Tin and Thyme. If you make these vegan hot cross buns, I’d love to hear about it in the comments below. And do please rate the recipe. Have you any top tips? Do share photos on social media too and use the hashtag #tinandthyme, so I can spot them.

If you’d like more Easter recipes, follow the link and you’ll find I have quite a lot of them. All delicious, of course.

Top TipsTo ensure the buns remain soft, half fill a roasting pan with water and place in the oven whilst it’s warming up. Keep it there whilst the buns are baking. The resulting steam will help the buns to rise as well as keeping them soft.Instead of a jam glaze, you can use sugar and water instead. Dissolve one tablespoon of golden granulated or caster sugar in a pan over a low heat with two tablespoons of water.Please note: calories are per serving. They’re approximate and will depend on exact ingredients used.