Baked yeast doughnuts are easier to make than you might think. This recipe uses wholemeal spelt flour to keep them light and fluffy. Once baked, the doughnuts are rolled in lightly spiced sugar. But be warned, they’re so delicious it’s impossible to stop at one. 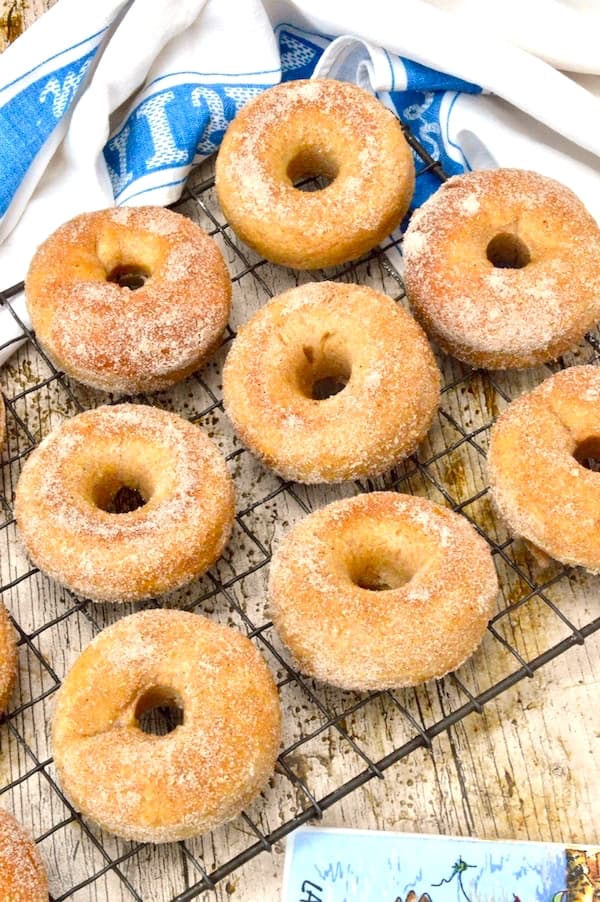 Doughnuts, or donuts if you’re in the US, are a firm favourite with just about everybody. As they’re mostly fried in deep fat, however, they’re not the healthiest of snacks. They’re also not that easy to make at home if you’re averse to deep fat frying.

Baking doughnuts as an alternative to frying is the answer. They’re much easier to make and although I’ve coated mine with butter and sugar, they’re less unhealthy too. I’ve used a minimal amount of both – just enough to give some sweetness and a good flavour. Each ring doughnut contains approximately 140 calories, which doesn’t seem a lot for a doughnut.

I have another recipe for baked doughnuts here on Tin and Thyme. And they’re really good. But they’re made with baking powder, not yeast, so they don’t really have the right doughnutty texture.

For those of you who are looking for something a bit more authentic, these wholemeal spelt baked yeast ring doughnuts are a real corker.

These homemade doughnuts are easier to make than most, for several reasons:

Wholemeal spelt flour also helps to keep the doughnuts light and fluffy. I usually sieve the flour though so I can discard any particularly large or coarse pieces of bran. These can spoil the lovely fluffy mouthfeel and may also prevent the dough from rising as successfully.

When you roll the dough into sausage shapes to place in the moulds, you don’t need to flour the work surface. Just give a light coating of oil instead. Dry doughnuts are probably not what you’re after and too much flour will dry them out.

Lay them in the moulds and roughly pinch the ends together. Many of the imperfections will disappear once the dough is risen and baked.

Although there’s not a lot of hands-on time required, you’ll need to allow about an hour for the dough to prove and double in size. They only take fifteen minutes to bake.

Once the doughnuts are out of the oven, push them out of the moulds onto a wire rack. Coat them in butter and sugar as detailed below.

These wholemeal spelt doughnuts are at their absolute best whilst they’re still warm from the oven. But it’s very hard to stop at just one. They will keep for a couple of days, but as with most doughnuts, the fresher the better.

Doughnut dough has very little sugar in it, so unless you fill your doughnuts with jam, ice them or coat them with sugar, you won’t be getting a particularly sweet treat. Good thing, bad thing, you choose.

I prefer a dusting of sugar, but not an all out drenching. We found these sugared ring doughnut to be about right. Sweet enough to satisfy decadent cravings, but not so overloaded that a trip to hospital will ensue.

To coat the doughnuts, you first need to melt some butter. Do this whilst the doughnuts are baking. At the same time stir the sugar and spice together in a bowl.

Brush the butter over the doughnuts as soon as you can after they come out of the oven. Though do be careful not to burn your hands. Once you’ve coated a doughnut push it into the bowl of sugar. Turn it over then do the same on the other side. Give it a good shake, then place on a wire rack to cool. Repeat until all the doughnuts have a good dusting of spiced sugar.

To activate yeast and get your dough to prove properly, the milk needs to be tepid or lukewarm. That is to say, slightly above body temperature. 38C/100F is ideal. However, since most of us don’t have a thermometer to hand, just stick a clean finger into the milk. If it feels slightly warm it’s ready to go. But i it feels hot, allow it to cool before using.

When you add milk, or any other liquid, that’s too hot to yeast, it will kill it. So it’s better to err on the cool side of caution.

Don’t Have a Doughnut Mould?

You don’t need a doughnut mould or pan to make these baked doughnuts, but it makes life a lot easier if you do. Without it, you’ll need a rolling pin and cutters.

It’s well worth investing in some silicone doughnut moulds. They’re cheap, will last many years and they make doughnut baking so much easier. Mine came from MoldyFun, but you can also get a three pack donut baking pan* on Amazon.

This recipe makes the perfect quantity of dough for twelve doughnut holes.

However, if you don’t have any moulds, you can roll the dough out to just over one centimetre (half an inch) in thickness. Stamp out six-seven centimetre (three inches) large circles, then stamp out smaller circles in the middle of the larger ones. Place on a lined baking tray and follow the instructions as per the recipe.

How To Tell When Baked Yeast Doughnuts Are Done

You know the doughnuts are done when they’re golden in colour and if you tap one on the bottom it sounds hollow inside. But for doughnuts, it’s better to err on the side of caution. If you over bake them, they’ll be dry and not nearly as pleasant to eat.

What Is Pumpkin Spice?

Pumpkin spice is a classic mix of sweet spices that Americans use to make pumpkin pie. Expect to find, cinnamon, nutmeg, cloves and ginger, though allspice is sometimes used too. The equivalent here in the UK is mixed spice.

I used pumpkin spice for these doughnuts, but you can use whatever spice grabs your fancy, or none at all. Cinnamon is delicious of course and mixed spice works well too. But if you fancy making your own pumpkin spice mix, this is how you do it.

Combine two teaspoons of ground cinnamon with one of ginger, half of ground nutmeg and a quarter of ground cloves.

Thanks for visiting Tin and Thyme. If you make these wholemeal spelt doughnuts, I’d love to hear about it in the comments below. And do please rate the recipe. Have you any top tips? Do share photos on social media too and use the hashtag #tinandthyme, so I can spot them.

If you’d like more recipes made with wholemeal spelt flour, follow the link and you’ll find I have quite a lot of them. All delicious, of course.

Best eaten whilst still warm, though still good the next day.To ensure a light and fluffy doughnut, it’s best to sieve out the largest and coarsest pieces of bran in the wholemeal flour. Use a wide mesh sieve for this as you want to keep as much of the bran as possible.If you don’t have pumpkin spice, you can either make your own, used mixed spice or just cinnamon. Or you can leave the spices out altogether. The choice is yours.It’s worth investing in some silicone doughnut moulds. They’re cheap, will last many years and they make doughnut baking so much easier. However, if you don’t have any moulds, you can roll the dough out to just over one centimetre (half an inch) in thickness. Then stamp out six-seven centimetre (three inches) large circles, then stamp out smaller circles in the middle of the larger ones. Place on a lined baking tray and follow the instructions as per the recipe.Please note: calories are per serving. They’re approximate and will depend on exact ingredients used.

I’m sharing this recipe for baked yeast doughnuts with A Strong Coffee for #CookBlogShare.