Delicious, soft and fluffy baked jam doughnut muffins. No need for yeast in this recipe. It’s a quick and easy muffin style bake, but it looks and tastes very much like a traditional doughnut. 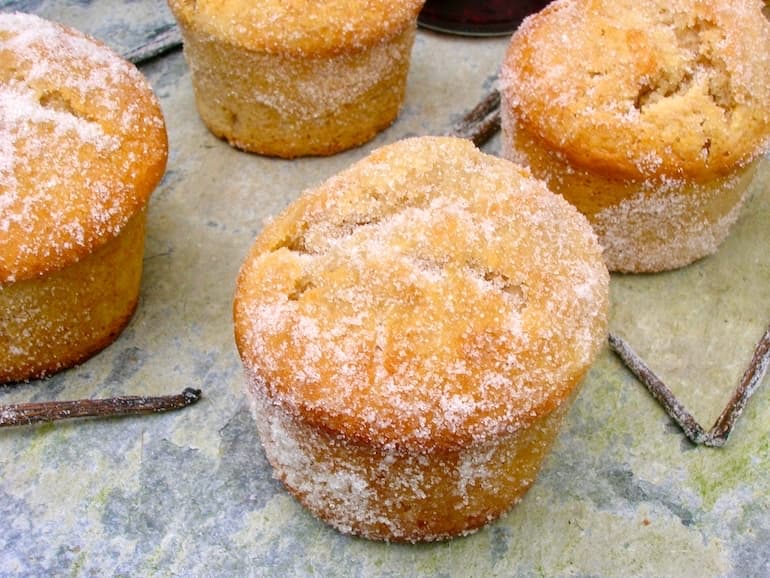 When I saw the recipe and accompanying pictures for baked jam doughnut muffins over at Lavender and Lovage, I knew it was only a matter of time before I tried them myself. As ever, Karen’s photographs are beautiful, but it was the recipe itself that enticed me.

I love doughnuts, but never buy them as they are, somehow the epitome of junk food. I’ve been wanting to try some of these baked doughnut style muffins for ages, but as soon as I come across a recipe, I lose it again. This time I bookmarked it.

Although my cupboards are overflowing with my own homemade jams at the moment, I wanted to try these doughnut muffins with a very special jam. The queen of jams herself, Vivien Lloyd, recently sent me a jar of her raspberry chocolate jam. Following on from my blackberry chocolate jam, I was keen to see how it compared to the real thing. A taste test was in order.

The first thing I noticed was the deep red colour, just a little darker than you’d expect a raspberry jam to be. It looked enticing. On opening the jar a zingy aroma leapt out; raspberries in their full fruity glory. The consistency was perfect, it stayed where it was put. Not too runny, but not too firm either.

It was the taste I was keen to try however. Getting the balance between fruit and chocolate is a tricky one; you want to taste both and not have one overwhelm the other. Raspberry was the first flavour to hit my tongue and it was glorious, but hot on its heels came the chocolate, adding depth and strength to an already delicious jam.

Mine is a very different sort of preserve. I’d sieved the blackberries for a start, as I find blackberry seeds rather more annoying than raspberry ones. Despite this, I think I’ll try them whole next time as it’s nice to get some texture. My jam has a soft set, so it’s runnier than Vivien’s, but the real difference is in the flavour.

The aroma wafting up from my jam is pure chocolate and that’s the taste that first hits the palate. The blackberry comes through very soon after, but the balance is the opposite to the raspberry jam. I was very pleased with my jam which is quite delicious, but it doesn’t have the subtlety I now see is desirable. I’ve been lucky to learn from a master.

I found there was too much mixture for the suggested six muffins in Karen’s recipe and ended up making eight very large ones. I used only a fraction of the butter and sugar for coating at the end as neither CT nor I like our bakes to be overly sweet and I didn’t want them to be tooooooo unhealthy. As it turned out, it was plenty.

I also used a mix of half wholemeal flour and half plain white. And I made my own “buttermilk” too. I have a handy trick for this which you can use if ever a recipe requires sour milk or buttermilk.

The method is a normal quick and easy muffin style. Basically that means, you stir wet ingredients into dry and mix until everything just about comes together. You don’t want to over mix muffins or they’re likely to end up on the heavy side, rather than the more desirable soft and light.

For a more authentic yeast version, but still baked rather than fried, take a look at my recipe for baked yeast doughnuts.

How to Make Vanilla Sugar

Vanilla sugar is really easy to make and such a handy ingredient to have to hand. I have a jar of vanilla sugar on the go permanently.

If ever I use a vanilla pod for anything, I make sure the used pod is dry, then pop it in a jar with golden caster sugar. The more spent pods you have in the jar, the more vanillary the sugar will be. Just top the jar up with sugar again as soon as you use some.

Muffin holes are perfect for this jam doughnut muffin recipe, but you don’t need muffin cases. Just ensure you’ve greased the holes before you add the batter. I use silicone muffin moulds and they work like a dream. I rarely get anything stuck in them and certainly not muffins.

Disappointingly the jam sank and looked nothing like Karen’s lush blob of jam in the middle of hers. However, I haven’t let this put me off baking them again, only now I fill the muffin holes to half way before adding the jam. Originally I did it when they were only a third full.

They’re delicious warm and equally good cold. The butter and sugar coating gives a crusty texture to the outside which contrasts well with the soft and fluffy inside.

As I suspected. the jam in this instance, was the star of the show. Apart from sinking, it worked exceedingly well. CT, the doughnut connoisseur, feels these are a good substitute for the cheap and cheerful version he snaffles when allowed out on his own.

I wasn’t quite sure, if the jammy smile was a cheeky chappy or a ghoulish face just right for Halloween. I’ll let you decide.

Thanks for visiting Tin and Thyme. If you make these easy jam doughnut muffins, I’d love to hear about it in the comments below. And do please rate the recipe. Have you any top tips? Do share photos on social media too and use the hashtag #tinandthyme, so I can spot them.

If you’d like some jam recipes, follow the link and you’ll find I have quite a lot of them. All delicious, of course.

Best eaten whilst still warm from the oven.Will keep well in the freezer for a couple of months.Please note: calories are per serving. They’re approximate and will depend on exact ingredients used.

I am so glad I remembered to bookmark this recipe as it’s one well worth having. I’m sending it off to Bookmarked Recipes, hosted by Feeding Boys and a Firefighter.

I’m also sending this over to Supergolden Bakes for Cook Blog Share.