This spicy dark chocolate cake is redolent with sweet and fragrant Dutch speculaas spices. It’s glazed with a shiny dark chocolate ganache and the whole thing is egg and dairy free, making it inclusive and entirely suitable for vegans. What’s more, it’s incredibly easy to make.

END_OF_DOCUMENT_TOKEN_TO_BE_REPLACED 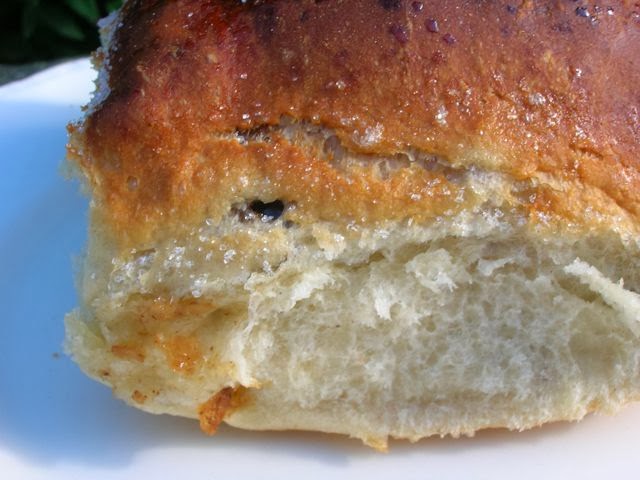 A delicious vegetarian version of traditional lardy cakes. They contain white chocolate rather than lard which works as a really good substitute. These non-lardy yeasted buns have an additional apple twist, but you can omit this if you’d rather.

END_OF_DOCUMENT_TOKEN_TO_BE_REPLACED

For my christmas hampers I was looking to make some sort of spiced biscuits that I could cut into stars and possibly decorate. There were several contenders, but I eventually plumped for Polish Spiced Cookies otherwise known as Pierniczki taken from Ren’s aptly named blog Fabulicious Food. These cookies made their way to Vanessa’s Lets Make Christmas event at Fortnum and Mason’s and were most beautifully decorated. I particularly liked this recipe as it used cocoa powder and lots of honey which sounded just right for ChocLogBlog Christmas biscuits. Ren also suggested using rye flour. Although I’m very familiar with rye flour in sourdough bread, I had never used it in sweet baked goods until I recently made Dan Lepard’s rye apple cake. I was completely won over by the wonderful texture this grain gives and was keen to try it again.

Already feeling cross for having burnt the first 20 biscuits, I was not particularly looking forward to icing the biscuits. I don’t have much patience for artistic endeavours and I found cutting stars out of the pastry was fiddly enough. In the end, I ran out of time anyway. Luckily, these looked really good even in their unadorned state. They had a good crunchy biscuity texture and tasted wonderfully warm and spicy with an unmistakable hint of honey. The touch of chilli was good too, giving just the right amount of additional warmth. Ren advises that these keep well for up to two weeks and I would say from the snappiness of them that this is very likely true. They have all left the house in hampers now though, so I am unable to verify this assertion.

A few weeks ago, the New Zealand Honey Co had sent me a 340g bottle of their 10+ pre-biotic Beech Forest Honeydew to try. It’s quite a dark honey that is gathered by the bees from honeydew rather than flower nectar. It is claimed to be particularly good for the immune system and digestion. This may or may not be true, but I have to say this was totally delicious. It has a deep rich and not too sweet flavour and has more body than many other honeys I have tried, leaving a nice flowery aftertaste. It warms the back of the throat in a healing sort of way – it feels like it’s doing you good. I have used it now in a number of recipes but also on toast for breakfast. It worked particularly well in these biscuits, giving them a special richness. This is also my first experience of honey contained in a squeezy bottle and it certainly helps to deliver it to the right spot without the usual mess and wastage. Not that I object to licking the spoon or my fingers come to that.