Fancy making a glorious summer dessert that’s full of interesting flavours and doesn’t require too much effort? This deconstructed apricot, whisky and honey cheesecake fits the bill beautifully. It’s a perfect pudding for entertaining and will wow everyone who tastes it. Although, it’s probably one for the adults rather than the kids. The recipe comes from A Flash in the Pan by John Whaite. Read on for my review as well as the recipe. 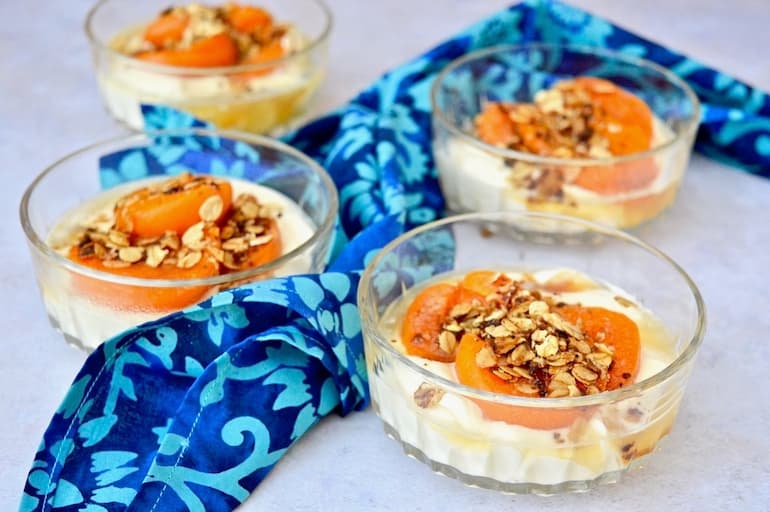 Like most food obsessives, I have a lot of cookbooks. Space is always a problem, so I have periodic clear-outs and also try not to acquire too many new ones. Sometimes though, it’s just irresistible.

A Flash in the Pan by John Whaite

A Flash in the Pan: simple, speedy, stovetop recipes* by John Whaite was published just five days ago. It’s full of interesting ingredients and flavour combinations with a strong nod to Asian cuisine. As the title suggests, all of the recipes are cooked on the stove top – no oven required. It’s not a vegetarian book, but like many cookbooks these days, it has a lot of meat-free and vegan dishes included. Many of the meat and fish recipes can easily be adapted.

Some of the recipes are simply outrageous and more akin to something you’d be served up by Heston Blumenthal than a home cooked meal. But they’re intriguing and I like to be intrigued. The bowl of charcoal and Guinness dampfnudel with blackberry and cassis compote is striking in its blackness, but the jury is still out as to whether I’d like to try it.

There are recipes I probably wouldn’t make as, despite the title, they’re not what I’d call simple. On the other hand, there are quite a few super speedy ones such as Indo-Chinese chilli paneer which can be made in ten minutes. I’ll definitely be trying that one.

But there are lots of good ideas here and recipes I’m very keen to try. Most of them sound really delicious: mushroom pho made with wholewheat noodles, tahini and honey pancakes and corn chowder with ricotta and chilli lemon oil all jumped out at me saying “make me, make me now”.

John Whaite came to fame when he won the third series of Great British Bake Off. He’s from a farming family but is a trained pastry chef. He now runs his own cookery school, but will forever be remembered by me for being a Bake Off star when it was still on the BBC. A Flash in the Pan is his fifth cookbook.

This book has an unusual photographic conceit. All of the photos are in shades of grey, except for the food. If john appears in any of the photos, he’s wearing grey. The tableware is all grey as are the backgrounds. Even the book cover is grey.

This may not sound very enticing, and I was a bit bemused by it to begin with. But it works really well. It looks incredibly elegant, despite John saying the recipes are really just for “two hairy blokes and a scruffy hound”. You can get an idea how it works in this photo of the apricot, whisky and honey cheesecake.

For those, like me, that like to see photos of every recipe, you’ll be pleased with this book. All of the recipes have an accompanying photo and most of them are full page. Plus, each chapter begins with a photographic menu of the dishes you will soon find. This is definitely a book for the visually oriented.

The chapters of this book come in an order that you don’t expect, so I was immediately caught off guard. It certainly made me sit up and pay attention. The first chapter, Speed Sweet Speed, is all about dessert. John gives an explanation as to why this is so, but my puritanical streak is not convinced. Having said that, the first recipe I chose to make from the book, apricot whisky and honey cheesecake, is in this very first chapter.

Season the Day features recipes where you prep in the morning in order to get a speedy meal in the evening. I only flicked through this chapter as everything was meat oriented. But it includes things like gyros, kebabs, burgers, nachos and stews.

I really liked the chapter Table for One. It’s rare for cookbooks to include recipes just for one and I like the message of inclusivity this gives. There are plenty of people living on their own and it’s annoying when recipes are mostly aimed at two, four or six people. Even those of us with spouses, partners or family sometimes have to cook just for ourselves. Plus it’s usually easier to scale up, if needed, than it is to scale down. I’m quite taken with the recipe for Okonomiyaki, a type of Japanese pancake made with cabbage.

This is followed by a Meat Free chapter. Not surprisingly, there were lots of recipes that appealed to me here. Some are vegetarian and some vegan. The walnut, feta and mint pesto with sweet potato and wholewheat pasta is a meal for two that I might just knock up for tonight’s supper.

I skipped over the chapter for Dinner Time, as there were only two vegetarian recipes in it. But I was taken with both of them, especially the recipe for saag halloumi. It’s a take on the well known Indian curry house, saag paneer. It includes tomatoes, so the dish looks really vibrant with its contrasting colours of red and green.

Much like the first chapter, the final one is back-to-front too. It’s start your day with First Bites. When I have the time, breakfast is my favourite meal. So maybe the best was kept to last after all. My mother was particularly taken with the idea of marmalade brulée French toast, but my favourite has to be the brunch burritos. What could be nicer than a lazy weekend start of sausage, egg, mushrooms, beans, cheese and veg stuffed into a wholemeal tortilla and served with chives and sour cream?

What I Really Liked

Despite my love of bright colours, I really liked the photography in this book. I’ve already mentioned how all of the photos come in various shades of grey, apart from the food. But this gives the book a rather sophisticated and elegant air which belies the full-on vibrancy of the recipes within.

John uses some really interesting flavour combinations and the food is full of bold flavours. There are lots of appealing recipes I want to try. This recipe for apricot whisky honey cheesecake was a real winner. It’s easy to make and super tasty.

Lots of the recipes used wholegrain noodles, wholemeal breads and one even featured my favourite spelt flour. As a whole food blogger, this got a definite thumbs up from me.

What Could Have Been Done Better

Some of the ingredients John uses in the recipes are decidedly unusual and difficult to get hold of. I feel the book is a little London centric in this regard. I’m really taken with the recipe for sour cherry and mahlab Welsh cakes. But where do I get mahlab in the New Forest?

I’m also not sure that the subtitle of the book reflects the actual recipes in the book. Simple, speedy, stovetop recipes made me think of lots of stew type meals and one pot creations. But quite a few of these recipes are a lot more complicated than ‘simple’ implies. Some of them are quick and easy for sure, but asparagus tempura with porcini mayo sounds like a bit of a faffy recipe to me. Delicious yes, but you have to soak the mushrooms, make a batter, deep fry and then make the porcini mayo.

I’m generally not a fan of deconstructed desserts. Neither, apparently is John Whaite. I don’t really see the point of them. But occasionally, you get one that works brilliantly and this apricot, whisky and honey cheesecake is one such.

It’s actually quite a simple dessert and is so much easier to make than a classic cheesecake. As in all of the recipes in A Flash in the Pan, no baking is required. You do need two pans and a bowl though, so don’t think you’ll get away with no washing up.

I made this apricot, whisky and honey cheesecake whilst my mother was staying. All of us loved it and wished there was more. I can see me making it again and again during apricot season. The flavours work beautifully together, but at the same time stand out on their own.

The dish is made with three separate elements. First you poach the apricots in a mixture of water, whisky, honey and whole spices. Whilst they’re cooking you whip up some cream with vanilla and honey, then add cream cheese and Greek yoghurt.

I used mascarpone as I happened to have some in the fridge, so I added a pinch of sea salt to the mixture. Cream cheese is normally salty, but mascarpone isn’t. The third element is the oaty ‘base’. Toss the oats in a hot pan, then add butter and brown sugar to caramelise.

Thanks for visiting Tin and Thyme. If you get hold of A Flash in the Pan or try this recipe for apricot, whisky and honey cheesecake, I’d love to hear about it in the comments below. And do please rate the recipe. Have you any top tips? Do share photos on social media too and use the hashtag #tinandthyme, so I can spot them.

If you’d like more dessert recipes, follow the link and you’ll find I have quite a lot of them. All delicious, of course. I also have a number of other cookbook reviews which you might be interested in.

Please note: calories and other nutritional information are per serving. They’re approximate and should only be used as a guide.