This recipe for a vegetarian version of Syrian stuffed red peppers in tomato sauce is the next in my Flavours of the Middle East series. In some small way, it’s an acknowledgment that there is a lot more to Syria than the dreadful civil war that’s been raging there for far too long. I’m a food blogger, so it’s the delicious Syrian cuisine I’ve chosen to highlight.

When I was a student in Lyon, I had a Syrian boyfriend. He was a brilliant cook and in his small room in the halls of residence, he used to cook up veritable feasts for me and all his friends. I don’t ever remember him cooking stuffed red peppers, but it was a long time ago and my memory for specifics is a little hazy.

This recipe for stuffed red peppers is Syrian in inspiration rather than actuality. It’s a vegan spin on koosa mahshi, stuffed Syrian summer squash. I’ve used small red adzuki beans to replace the traditional lamb mince in this particular version, but I often use lentils instead. Actually, if you look closely at the photos, you’ll see there aren’t any beans present at all. I forgot to add them and only noticed when the dish was cooked. I ended up scattering them over the contents of the pan and cooking it a little longer. Do as I say, not as I do!

I cook these stuffed red peppers on the stove top for speed and saving pennies rather than in the oven. This is how food would have been traditionally prepared in the Middle East and I suspect still mostly is. They can, of course, be cooked in the oven if preferred. I’ve used romano red pepper rather than bell peppers as those are what I had in at the time, but either work well. I’ve also used red wine in this recipe, which is definitely not a Syrian thing to do. Traditionally, they add lemon juice. The sweet red peppers contrast well with the sharp tomato sauce and the spicy filling soaks everything up to make a most delicious and satisfying meal. Serve with your greens of choice.

There are many terrible conflicts going on around the world. Most of us feel completely impotent to do anything about it. Mandy over at Sneaky Veg and Lisa from Lovely Appetite decided to do their bit – Food for Thought. Over the next few months, they are going to be posting recipes from various war-torn countries with a donation link to Médicins San Frontières (MSF). Anyone can join in and I’ve decided to do so this month with my stuffed red peppers.

Around 4.8 million have fled Syria since the civil war started in 2011 and another 6.5 million have been internally displaced. MSF operates medical facilities where it can in Syria and also supports many others. It also distributes food. Click on the Médecins Sans Frontières link to find out more about the crucial work they are doing in Syria.

If you’d like to donate, Mandy has set up a donation page here.

You can substitute bell peppers for Romano peppers. Can be cooked in the oven rather than on the stove top if preferred. 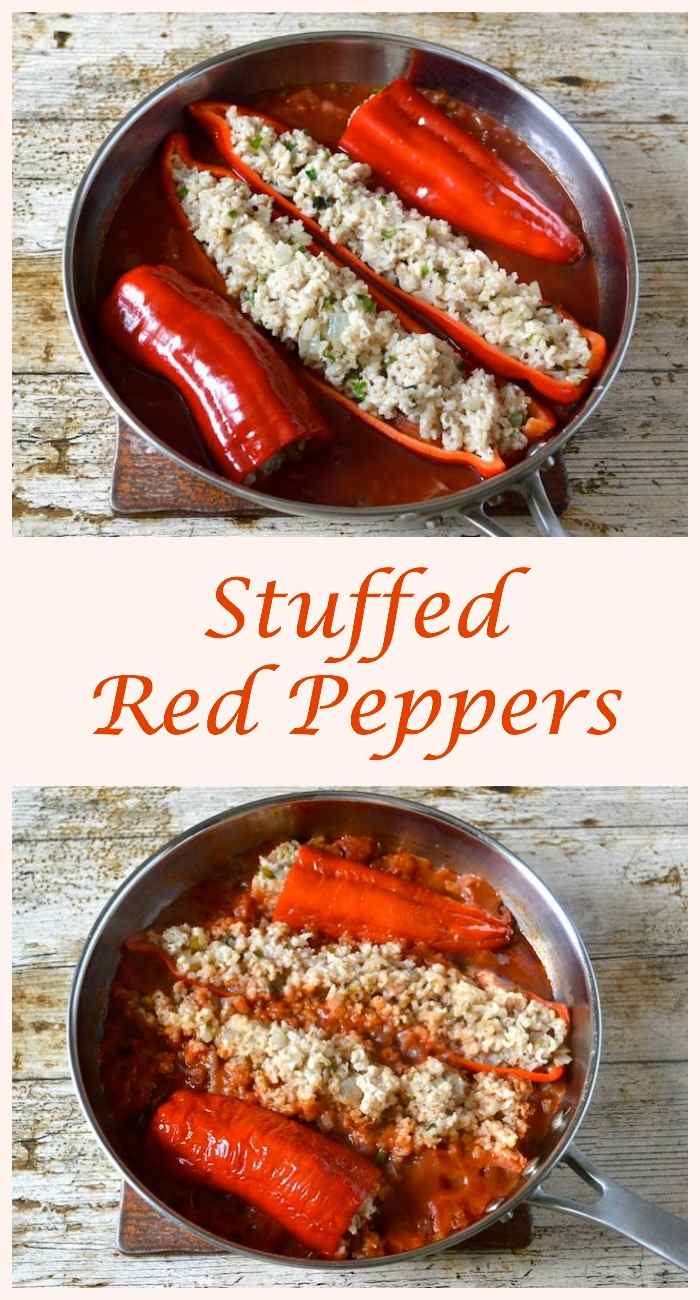