Thick, rich and velvety, this vegan hot chocolate is dairy-free. It’s a high treat for vegans and non-vegans alike. It’s a must for any breakfast feast, but is probably best saved for special occasions.

I’ve been a supporter of Fairtrade Fortnight for many years now. This was long before I even became an active Co-Operative member and helped out in store. It continues in my current position as a food blogger.

This year the campaign is focusing on Sit Down for Breakfast, Stand Up for Farmers and runs from 29 February to 13 March. With this in mind, I’ve prepared a delicious Fairtrade Fortnight Breakfast using a number of Fairtrade products. I’ve also created this rather lush recipe for vegan hot chocolate.

Breakfast is probably the most important meal of the day, it’s certainly one of my favourites. It kickstarts your metabolism and nourishes your body, depending on what you eat, of course.

We sat down to a rather indulgent but most delicious Fairtrade breakfast of cereal, banana bread spread with peanut butter and vegan hot chocolate topped with marshmallows.

Sadly, many around the world are not so fortunate. In fact the very farmers who grow our food often go hungry along with their families. That can’t be right. The Fairtrade Foundation works with businesses, consumers and campaigners to secure a better deal for agricultural workers and small farmers. Over the next couple of weeks, they are asking you to eat a Fairtrade Fortnight breakfast to show your support. 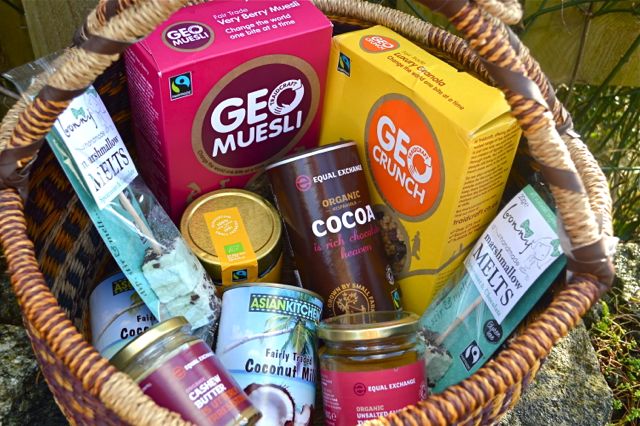 Luckily my local Co-op sells Fairtrade bananas, so they’re easy to get hold of. That’s a good start. Then I was sent a delightful array of other Fairtrade products to use for my Fairtrade Fortnight Breakfast, most of which are organic. And some are doubly exciting as I’ve not come across them before.

For over thirty years, Equal Exchange has been working with small farmer co-operatives around the world to produce high quality organic whole food products. At the same time they aim to help improve the lives of local people by creating a fair and sustainable trade.

Their unsalted smooth peanut butter is one of the best I’ve ever tasted. I’m now wondering why salt is ever needed. The cashew butter I haven’t yet tried but I most certainly will as it’s my most favourite nut butter of all. It works a treat in these cashew nut butter brownies and also in this vegan chocolate banana cashew cake.

I also received a jar of organic clear honey. Fragrant, floral and rather addictive, the honey comes from Mexico and Nicaragua. I do love honey.

We go through quite a lot of cocoa powder, so I heartily approved of the large 250g tub of pure organic, vegan and gluten free Hispaniola cocoa. Some of it went into the vegan hot chocolate.

Incidentally, Equal Exchange offer a fabulous selection of organic fairly traded 100g chocolate bars. They sent me a bar of their lemon ginger dark chocolate with black pepper. Well I sort of knew I was going to like it and guess what? I did. With its fresh citrus notes and full bodied 55% cocoa solids, we were off to a good start. The presence of black pepper gave it a slight edge and enhanced the gingery heat.

Traidcraft has been on my radar for many years. It campaigns tirelessly for trade justice and runs various development projects around the world as well as selling a number of Fairtrade products. My jar of Equal Exchange cashew butter, came via Traidcraft. As well as offering a wide range of food items, Traidcraft also sell homeware, clothing, jewellery, toys, gifts, cards and paper. 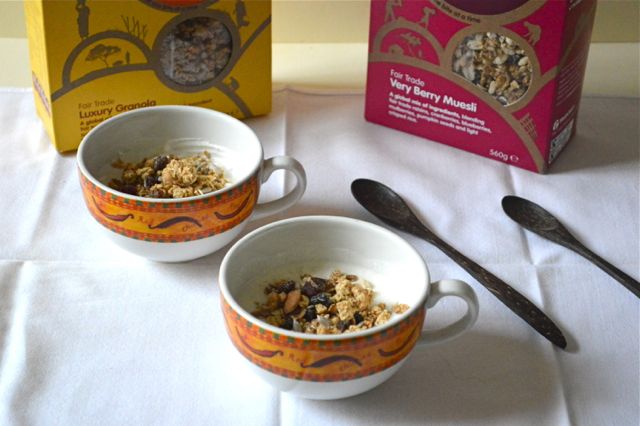 They provided me with a box of their Very Berry Geo Muesli and one of Geo Crunch. Granola is always a winner with us and this was a good one with plenty of fruit, almonds and seeds. The real surprise though was the muesli. It had an interesting mix of oat, barley and wheat flakes but also crisped rice, which gave it a lovely crunch. The cranberries, mulberries and blueberries made it a bit more unusual and also very delicious. We had a bit of both for our Fairtrade Fortnight Breakfast accompanied by some of our wonderful kefir.

Based in Paisley, Scotland, JTS is a not-for-profit company importing and distributing fairly traded foods. For my Fairtrade Fortnight Breakfast, they sent me some MA’s tinned coconut milk. The coconut milk is thick and creamy and tastes gorgeous. I’ve had milk from some brands which is watery and tastes slightly odd. The coconut milk is currently being rebranded, so the picture below is what you should be looking out for in the shops, rather than the tins I was sent.

MA’s ingredients are all sourced from small organic producers in Sri Lanka. Organic certification is also being sought. So although it’s not mentioned on the label, the coconut milk is organic to all intents and purposes.

JTS also sent me some premium aromatic Kilombero rice, a 500g packet of brown and the same of white. The rice is grown by small producers in Malawi using traditional cultivation methods that protects the rich alluvial soils. I haven’t’ tried any of it yet. But there’s a rather tasty sounding recipe for a vegan rice pudding on the coconut milk label which uses this rice, coconut milk and spices.

I’ve not come across Bonny Confectionary before. Based in North Wales, they specialise in handmade gourmet marshmallows, which look and sound rather wonderful. Whilst they are gluten free, they contain gelatine so are sadly not suitable for vegetarians and vegans.

Whilst I never buy marshmallows, I find them hard to resist. So I tend to cave in on the odd occasions they are presented to me – shh, don’t tell! I like the concept of their marshmallow dippers on a stick for dunking in hot chocolate or the hot drink of your choice. The spearmint and chocolate marshmallow melts I was sent, sweetened our drink and gave a subtle minty freshness to it, which was far nicer than I was expecting.

Divine chocolate is pretty much what you’d expect from the name. It’s been selling fairly traded chocolate since 1997 and was the first company to be part owned by the cocoa producers themselves. You can find more about the organisation and what it offers by heading to my post Divine intervention or to the Divine website.

I was expecting a delivery for my Fairtrade Fortnight Breakfast, but sadly, it didn’t make it in time. Luckily, I had a bar of their 85% dark chocolate already to hand, so I was still able to use it in my vegan hot chocolate recipe. 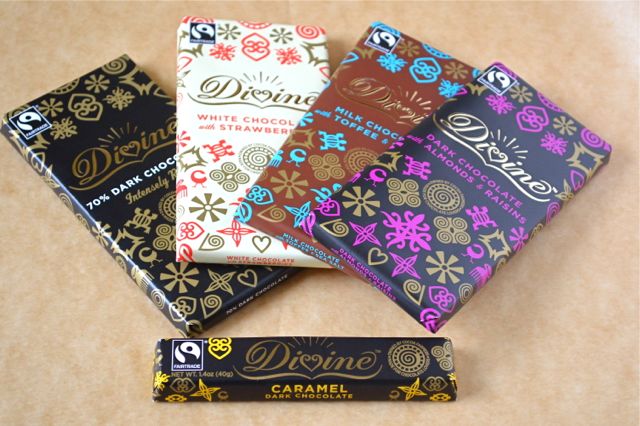 The dark chocolate with almonds & raisins is a new bar just out. Made with 60% cocoa solids from the Kuapa Kokoo co-operative in Ghana, it has Divine’s signature adrinkas both on the wrapping and the bar itself. The almonds are grown in Pakistan, the sugar comes from Malawi and the vanilla from Madagascar. All ingredients are, of course, Fairtrade.

Although I didn’t get the opportunity to have any for my Fairtrade Fortnight Breakfast, I did manage to try a square or two before going to press. The crunchy nuts and sweet burst of raisin make it quite delicious. I’ve not come across the caramel dark chocolate bar before either, so I’m definitely looking forward to trying that. 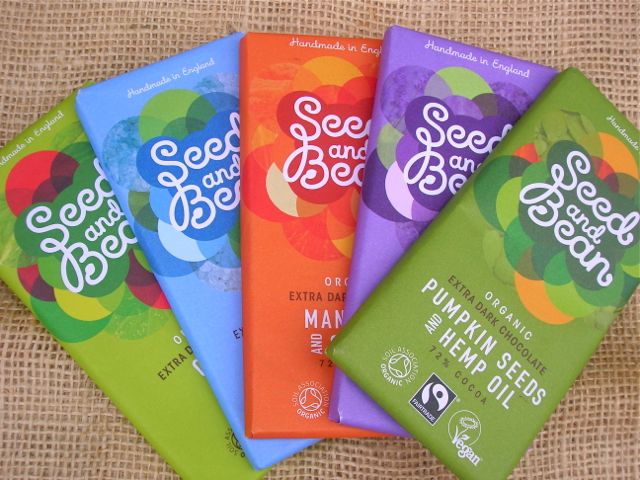 Speaking of chocolate, Seed & Bean also have a fabulous range of organic Fairtrade bars. I thought I’d tried all of them, but then they threw the Pumpkin Seed and Hemp into the ring.

This 72% dark chocolate bar studded with pumpkin seeds and flavoured with hemp oil lives up to the high standard I’ve come to expect from Seed and Bean. Like all of their bars I’ve tried, the chocolate is really smooth and despite the high cocoa content, not at all bitter. The seeds give a welcome crunch and nutty flavour and the hemp oil, whilst hard to describe, is definitely present.

CT thought he could detect whisky undertones and I sort of understood what he meant – robust and slightly peaty. We both really liked the bar, as demonstrated by the speed in which it disappeared.

The other bars I’ve reviewed quite extensively already. You’ll find them in this organic and fairtrade chocolate bars post and this rainbow of delight post.

I have a separate post for this fabulous breakfast banana bread. But the main thing about it, is that I was keen to slather it with peanut butter. Specifically, the Fairtrade organic peanut butter from Equal Exchange. 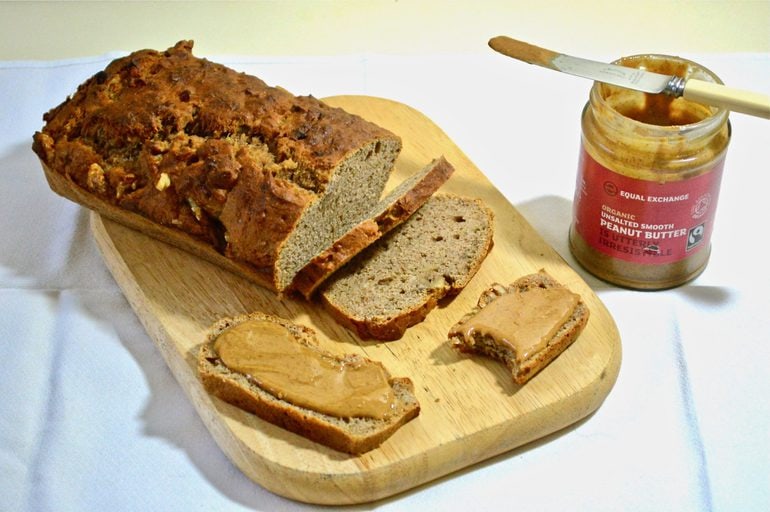 It’s a healthy bake as befits breakfast. It’s low fat, not too sweet and contains a little of Equal Exchange’s fragrant floral honey. We had it toasted and untoasted. Both were thoroughly delicious, especially when spread with the peanut butter. It would, of course, also be splendid spread with butter and the afore mentioned honey.

For my hot chocolate recipe, I wanted to create a luxury dairy-free drink that was suitable for vegans. A tin of MA’s coconut milk seemed just the ticket. Divine’s dark chocolate and the cocoa from Equal Exchange added a rich chocolate tone that tempered the coconut flavour nicely.

As I intended for us to dip the marshmallow melts into our vegan hot chocolate, I didn’t add any additional sweetener. In other circumstance, I’d have added a spoon or two of maple syrup and I’ve included that in the recipe. The hot chocolate was such a treat. Rich and creamy with a velvety mouth feel. It was a total indulgence.

Vegans beware. The marshmallows I’ve reviewed here are not suitable for vegans – or even vegetarians. Luckily, these days, there are some really good vegan marshmallows available. Although they are quite expensive.

And for lots of reviews of various drinking chocolate products, take a look at my hot chocolate category.

Thanks for visiting Tin and Thyme. If you make this vegan hot chocolate or try any of the products featured here, I’d love to hear about it in the comments below or via social media. Do share photos on social media too and use the hashtag #tinandthyme, so I can spot them. 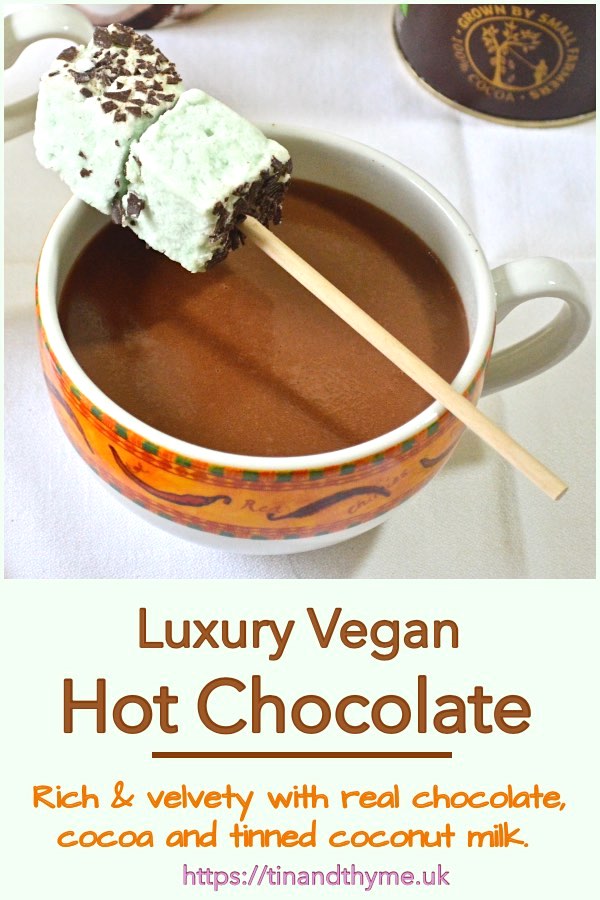 Makes 2 x 250ml cups, but as it's very rich it could easily make 4 x 125ml cups. You can swap the tinned coconut milk for a plant milk, but it won't be nearly as creamy nor as rich.
Please note: calories and other nutritional information are per serving. They're approximate and will depend on exact ingredients used.

Thanks to all those mentioned who sent ingredients to help create a Fairtrade Fortnight Breakfast. This is not a sponsored post. All opinions are, as always, my own. Thank you for your support of the brands and organisations that help to keep Tin and Thyme blithe and blogging.