And my prayers were answered. A box crammed full of Divine chocolate delights, nestling on a bed of colourful recycled packing material, arrived in the post.

Divine is a fairtrade chocolate company set up in 1997 to provide an outlet for the chocolate grown by a Ghanian co-operative of small scale cocoa growers. The company is 45% owned by that co-operative, Kuapa Kokoo, so much of the profits are reinvested back into the local communities as well as the farms. Benefits have included schools, where none existed before, children being able to attend school, better health care and cleaner water.

The packaging is an important part of the aesthetic and luxury experience I expect to get from good quality chocolate. I have an aversion to chocolate wrapped in plastic and am surprised at how many “good quality” bars are wrapped in it. Divine bars, I’m pleased to say, are all contained in an inner casing of gold and silver foil, thus scoring top marks from me. The outer paper wrappings come in a variety of colours matching the  ingredients within and are covered in attractive West African symbols called adrinkas. Each one has a specific meaning and if interested some of the meanings can be looked up on the Divine website. In my thrifty eco friendly way, I recycle these chocolate papers as gift wrapping.

The chocolate is not top of the range and at around £2 for a 100g bar, you wouldn’t expect it to be. But it is still good chocolate and of a far higher quality than the average chocolate bar you can buy in the UK. It is also widely available. Even in the wilds of our small town on the edge of Bodmin Moor, it is stocked in both our local Co-op and Oxfam shop. I’m familiar with the 70% dark chocolate, which I often use in my baking, such as this Chocolate and Almond Fudge Cake. For a dark chocolate, it has a mild and soothing quality which I find pleasant. But I am less familiar with other Divine bars and had no idea they made fudge at all.

It was the fudge I dived into first, not so much because I’m a fan of fudge; I used to love it, but these days I generally find it too sweet. The description enticed me in though. I have been won over by the salt / sweet combination that’s doing the rounds and salted fudge sounded intriguing. I was more than pleasantly surprised. The salty fudge was really quite delicious and because the chunks were quite small and thickly covered in dark chocolate, they were not overly sweet in the least. 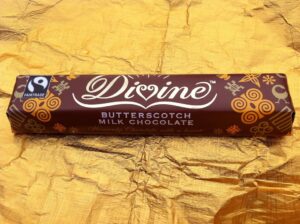 Having said, I don’t like things too sweet, I am a fan of butterscotch in chocolate, so I was pleased to see a 45g bar had been included in the box. I haven’t tried Divine’s version before but it didn’t take me long to rectify this. Despite the milk chocolate being only 27% cocoa solids and not skimping on the butterscotch, this was not cloyingly sweet, in fact it was more than pleasant.

The next up to try was the 70% dark ginger and orange 100g bar. I had something specific in mind for this and used it to make gingered chocolate mincemeat. I did, however, manage to snaffle a couple of squares – for my usual research purposes! The chocolate had the same mild quality of the 70% bar but had a subtle ginger flavour with tiny pieces of orange dotted about. I could have quite happily eaten the whole bar, but managed to resist.

Three 100g bars remain and I am trying to be very good and not go into a frenzy of flying gold paper fragments and inelegant gulping. No – I have plans for these – baking plans. So what’s left: 70% dark chocolate with raspberries, orange milk chocolate and white chocolate with strawberries.