A delicious summer green soup using seasonal vegetables and enhanced with parsley and almond pesto. It’s a good one for using up any garden gluts or produce that’s been lurking in the fridge for a bit too long. There’s plenty going on flavour wise and it’s substantial enough to be the main meal of the day. 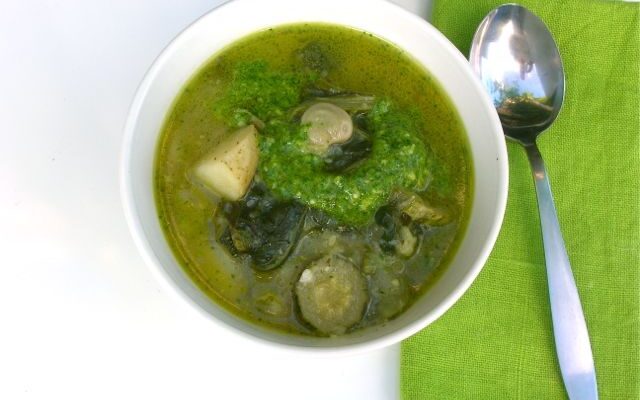 Just because it’s summer, it doesn’t mean I don’t want soup, especially when that soup is packed with summer produce. With a house full of newly dug potatoes, courgettes and broad beans, I took inspiration from a Nigella recipe for Summer Minestrone in the September 2004 issue of Delicious.

The soup recipe included green beans and asparagus, neither of which I had. It did strike me as an odd combination. Asparagus is ready for harvest in the late spring but green beans are picked much later on in the summer. If the name of the game is local seasonal produce, it’s unlikely these two vegetables could be harvested together. However, I had some spinach to hand and an abundance of the other ingredients, so I used those instead. I decided against adding pasta and just used lots of potatoes instead. I doubled the amount of garlic and created a parsley and almond pesto rather than a basil one, which in any case didn’t contain nuts. A little more protein would not go amiss, I thought.

The soup was delicious and didn’t seem at all out of keeping with the weather, which admittedly wasn’t that hot. It’s simple to make and uses up lots of odds and ends. It kept us going for several meals.

Thanks for visiting Tin and Thyme. If you make this summer green soup with or without the parsley pesto, I’d love to hear about it in the comments below or via social media. Do share photos on your preferred social media site and use the hashtag #tinandthyme, so I can spot them.

Adapted from Nigella Lawson's Summer Minestrone in Delicious, Sept 2004
Tried this recipe?Please take a photo and mention @choclette8 or tag #tinandthyme on Instagram, Twitter or Facebook.

I’m sending this summer green soup off to Jac over at Tinned Tomatoes for Meat Free Mondays.

The parsley pesto in and on the soup also makes it eligible for Cooking with Herbs with Karen at Lavender and Lovage.

The soup is packed with veg so it’s my entry to Extra Veg which is being hosted over at Jen’s Food this month.

I’m also sharing this Italian inspired soup with Jac at Tinned Tomatoes for No Croutons Required.