Home » Reviews » Eating Out, Travel and Events » Capturing Cornwall » Afternoon Tea at The Alverton in Truro
Share on TwitterShare on FacebookShare on PinterestShare on LinkedInShare on E-mail

Afternoon tea is one of my absolute favourite things. For me, there are few activities that are as indulgent, sociable and relaxing as this very British institution. It might be a tea party in the house, or sitting in a friend’s garden. Visiting a café or tea rooms is always a treat. Or upping the anti at a luxury hotel such as The Alverton, the only 4 star hotel in Truro. 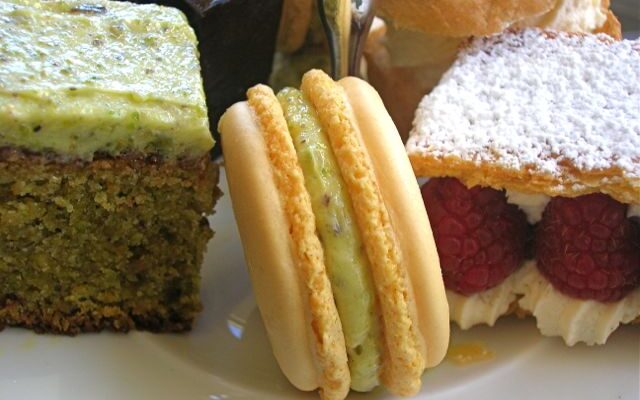 For the Love of Baking

When I was a child, we lived for a few months with a friend of my mother’s who was renowned for her elaborate high teas. She made them for us all every weekend. There were sandwiches, cakes, tarts and the piece de resistance, Yorkshire puddings served with jam and clotted cream – no scones for Glenys. She later opened a very popular tea shop on Dartmoor, which I so wish was still in existence. I’m sure it was her teas that set me up for my love of baking.

It wasn’t until my early 20s that I had my first afternoon tea at an exclusive London hotel – The Ritz, no less. I’d gone there with friends to celebrate my birthday. It’s hard to express how excited I was at the prospect. Later a group of us celebrated our graduation with afternoon tea at The Grosvenor, which was even more sumptuous than the Ritz. Afternoon tea has never ceased to be a real treat and something to look forward to.

Afternoon Tea at The Alverton

Luckily, afternoon tea has become increasingly popular outside London and it’s now easier to find hotels and other venues that put on a good spread. In honour of National Cream Tea Day, last week, I was invited for the Ultimate Afternoon Tea at The Alverton. The Alverton is a beautiful old manor built in 1830. It became a convent in 1876 with a large chapel added for the purpose.  In 1984, the manor became too big for the dwindling number of nuns and it was converted into a hotel. The building is grade II listed and boasts sandstone walls, mullioned windows and a Cornish Delebole slate roof. It also has an extensive garden with some impressive specimens, as CT was pleased to point out.

The day we visited was a pleasantly warm and sunny one, so we chose to sit outside on the terrace, although the table that had already been laid for us looked rather inviting with its crisp white napkins and window aspect. We sat under the parasol enjoying the views of the garden and chapel whilst we studied the tea menu. The teas are all Cornish ones from the nearby Tregothnan estate, which I thought a particularly apt touch. We both ended up ordering manuka tea, which is not only refreshing, but has a distinctive fragrance which took us both back to our time in New Zealand. I was quite entranced with the accompanying tea timer, which allowed us to enjoy the perfect brew.

I’d already notified the hotel that I was a vegetarian. I was, however, a bit concerned that this might have been overlooked. I needn’t have worried; when the sandwiches arrived, there were the set ones for CT and a separate plate for me. The finger sandwiches were neat, with the crusts cut off, of course. My fillings were: cream cheese and cucumber, egg mayonnaise and cheese with homemade pickle – all rather tasty.

The sandwiches did not arrive on their own. We had a veritable tower of goodies, with a selection of elegant patisserie as well as homemade scones, jam and Cornish clotted cream. It was National Cream Tea Day after all. I thought the clotted cream shaped into quenelles was particularly well done and made a nice change from the usual pot. We enjoyed the cream tea part, but the cakes were truly delectable.

As we didn’t want to ruin our afternoon with an unseemly squabble over who should have what, we halved the cakes so we could try them all. Luckily there were two pistachio and orange macarons so we had a whole one each. We really enjoyed the raspberry millefeuille, profiterole and chocolate brownie stack, but surprisingly we both thought the less showy pistachio and olive oil cake was the best of the lot. Apparently the chef particularly enjoys crafting his patisserie and it showed.

We sipped our tea, savoured our cakes and thought “this is the life”. The staff were very attentive, coming out regularly to check on our welfare and whether we needed a top up for our brew, which we did – twice. It was a relaxing and very enjoyable afternoon and I have a sneaking suspicion we will be back. I did think, as it was the strawberry season and we grow some most delicious strawberries in Cornwall, that there might have been one or two accompanying the scones, but that’s a minor quibble.

Afternoon Tea at the Alverton is served from 3-5pm seven days a week. At £15, the full afternoon tea is reasonably priced. A glass of prosecco or champagne can be added for an additional £5.50 or £10.50 respectively.

Thanks for visiting Tin and Thyme. If you visit the Alverton for Afternoon Tea, I’d love to hear about it in the comments below or via social media. Do share photos on your preferred social media site and use the hashtag #tinandthyme, so I can spot them. For further reviews, follow me on Twitter, Facebook, Instagram or Pinterest.

Thanks to The Alverton for inviting me to partake of afternoon tea. I was not required to write a positive review and as always, all opinions are my own.

Previous Post: « Berry and Rose Kefir Smoothie: a Healthy Start to the Day
Next Post: Plump for a Pimms or Mash up a Mojito? »