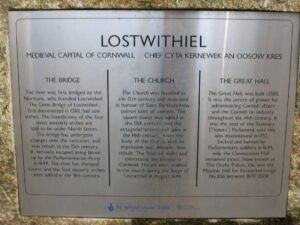 No indeed, this small town packs in plenty of delights. Lostwithiel is the ancient capital of Cornwall – one of many! Cornwall is not part of England, just ask the Cornish. It’s the home of King Arthur, tin mines, pasties, but most importantly clotted cream. A dear friend, now deceased who swam in the seas nearby well into her eighties claimed that the Phoenicians brought clotted cream with them when they came trading for tin several thousand years ago. We came not in search of tin, but of cream teas!

Lostwithiel, a river runs though it, the Fowey, named after the Cornish word for the beech trees that hug its banks. In fact, in the middle ages this was one of the biggest ports on the South Coast of Britain. Since then the river has silted up with all the tin mining going on upstream in previous centuries. It was after all a stannary town – an administrative centre for the collection of Crown taxes on tin exports. Now the only boats you see are canoes and rowing boats. Although a few miles downsteam at Fowey, once home of Daphne du Maurier, large tankers still regularly call in to collect the local china clay.

Restormel Castle up on the hill was used by the dukes of Cornwall to stamp their authority on the region and protect their assets. It took a bit of a battering in the English Civil War. From the castle it’s possible to walk through to the Lanhydrock Estate where you can see what they did with the money made from their exploits. There is much more to tell about Lostwithiel including some intriguing connections with the United States.
But enough history – let’s eat!

Where better than Muffins, Lostwithiel’s very own award winning teashop. Not that we are going to be eating muffins of course, this is a cream tea expedition.

A Cornish Cream Tea is not to be confused with a Devonshire cream tea or any other cream tea to be found in England. The jam is applied to the cut scone first – the order in which this is done is very important. This is then topped with a magnificent dollop of delightful clotted cream. For those who have not yet tried this manna from heaven, it is produced by scalding rich milk from our lush pastures and then skimming the cream off the top. The scones at Muffins are particularly good – better than many of the overblown monsters sold in less deserving establishments. Actually, the scone is a bit of a Johnny come lately. Traditionally, a cream tea was served on a Cornish split – a yeasted roll.

If you are looking for something a little more exotic, you could pop up to Bellamama, a small but perfectly formed deli just up the road. Here you can get such delights as black garlic, chocolate cake, hand made pizzas and local cheeses such as Yarg, a speciality cheese wrapped in nettles – it’s delicious, honest!