If you’re obsessed with chocolate, you might just like the idea of a six course chocolate themed dinner party. Here you’ll find a Middle Eastern inspired meal for six people with chocolate making an appearance in every course, at least once. 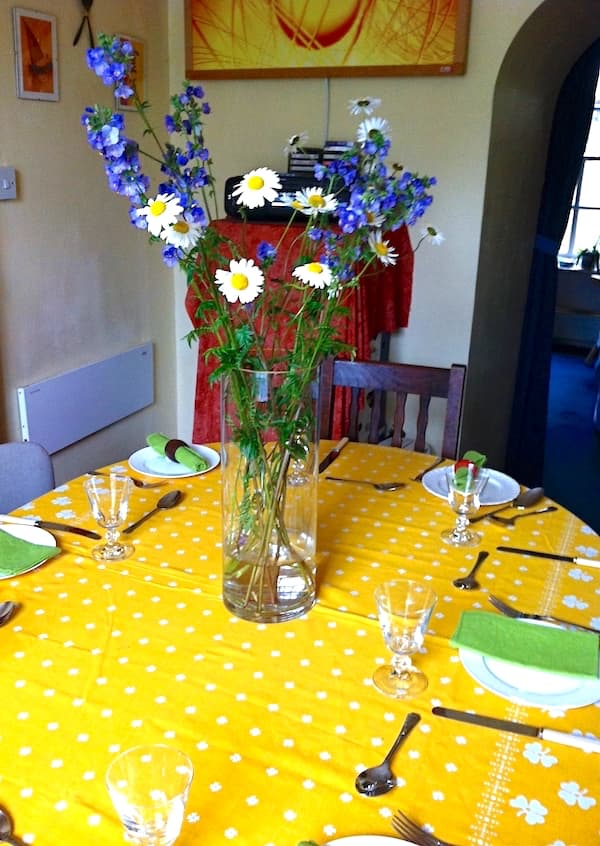 When issued with a challenge by MoneySupermarket to stay at home and have a fun night in, rather than a fun night out and be given £50 to make this happen, there was simply no resisting. CT and I are homely bods and rarely spend that sort of money on a night out, but given this opportunity, my thoughts quickly turned to a rather indulgent night in.

I would host a dinner party, not just any old dinner party but a six course chocolate themed dinner. I expect this comes as no surprise to anyone, the only wonder is, why haven’t I done it before?

Flavours of the Middle East

A bit of planning, a lot of shopping and a fair bit of cooking resulted in a brilliant night in with four of our friends. I’d recently seen a picture of a falafel salad in my Co-operative members magazine, which inspired me to create a Middle Eastern mezze type of meal – vegetarian of course. I’ve always been a big fan of Middle Eastern food, something to do with my Egyptian inheritance, I expect.

Three years ago I attended a Middle Eastern mezze course at Rachel Demuth’s Vegetarian Cookery School and learnt to make a few things I was less familiar with. As well as an introduction to sumac and pomegranate molasses, neither of which I’d come across before, I particularly valued learning how to wrap food into neat filo triangles. These had to feature for sure.

For more recipes inspired by this part of the world, here’s my Flavours of the Middle East category.

Chocolate dukkah served with olive oil and what was meant to be homemade flatbreads, but looked more like misshapen rolls. Don’t be fooled, these are not what you can see in the photo below. I could have made some spelt cocoa pitta breads, but I didn’t want to overdo the chocolate element.

The idea is to dip the bread in the olive oil and then into the dukkah.

Chocolate falafel served with a mixed salad in tahini dressing and drizzled with chocolate balsamic vinegar. This was also accompanied by a NON chocolate dish – sumac roasted vegetable and halloumi couscous. Cornish asparagus was still in season, so made its way into the roasted vegetables.

Well you can’t have a dinner party without finishing up with coffee. I served the coffee accompanied by these goat’s cheese chocolate truffles. You might think cheese and chocolate is a bit of an odd combination. But try it, these sweet and savoury chocolate truffles are just delicious.

I was aiming for understatement rather than an in your face everything-tastes-of-chocolate style event. And I was really pleased with the result. Full details of the recipes will be posted at a later date. Apart from the shots and the truffles, I used the chocolate to add depth and interest rather than as a stand alone flavour.

The chocolate shots were, of course, delectable and the goat’s cheese truffles every bit as good as I hoped they might be. Everyone seemed thoroughly delighted by the experience and we all enjoyed our six course chocolate themed dinner Big Night In.

All those participating in this challenge are being entered into a competition, with the lucky winner garnering a prize of £500. That’s ten chocolate themed dinners according to my reckoning.

Many thanks to MoneySupermarket for this opportunity to push the boat out and have a splendid Big Night In. I’m not qualified to say whether they’re correct and “staying in is the new going out”; one thing ‘s for sure, though, there is no way six of us could have eaten out so well for £50, or anything like it. Factor in the chocolate theme and it gets even more unlikely.

Thanks for visiting Tin and Thyme. If you like the idea of a six course chocolate themed dinner, I’d love to hear about it in the comments below or via social media. Do share photos on social media too and use the hashtag #tinandthyme, so I can spot them.