Chocolate falafel are not in the least bit traditional, but they’re really delicious. They’re made with chocolate almond butter as well as chickpeas, so they have a nutty dimension as well as a chocolate one. Enjoy them for lunch or surprise family and friends with them as part of a Middle Eastern feast. 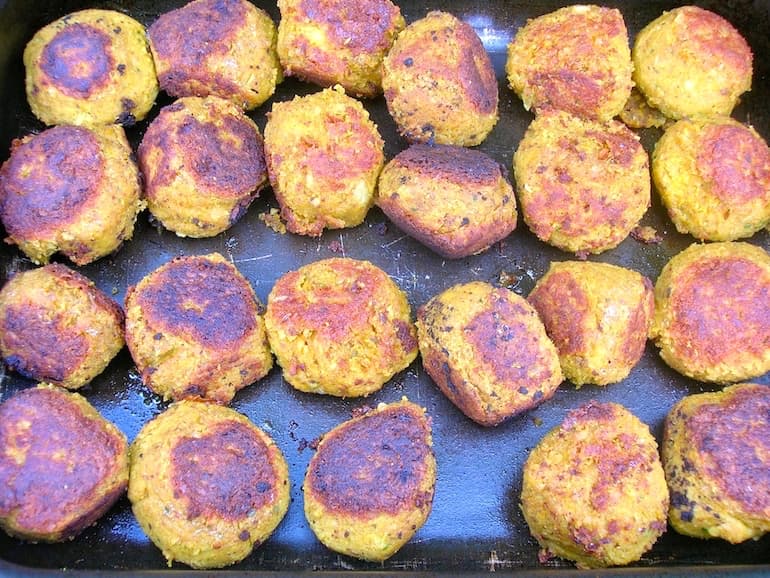 These falafel were the inspiration that kick-started me into planning a six course chocolate themed Middle Eastern menu for a dinner party last week. I saw a recipe for falafel salad in the summer edition of the Co-operative’s Share magazine and it immediately appealed to me.

I decided to separate the falafel from the salad and add raw chocolate and almond spread. The falafel recipe I have from the Vegetarian Cookery School uses tahini, so I don’t see why a nut butter wouldn’t work instead of a seed one. I mixed and matched between the two recipes, added my own twist and came up with a version I’m really happy with.

These chocolate falafel are really good and have both the taste and texture I remember in the streets of Egypt. This, even though they’re not deep fried. The chocolate isn’t obviously noticeable, but it adds a certain depth and gives added interest. They’re certainly better than the pale imitations that are commonly available in UK supermarkets.

They’re a bit more indulgent than either my traditional Egyptian falafel or my carrot falafel. Although they’re ultimately baked, I fry them in pan on the stove top first before popping into the oven. I also use an egg, which means they’re not vegan as my other ones are. They are, however, still dairy-free.

Traditional falafel are stuffed full of herbs, but I’ve only used a few sprigs of parsley as I didn’t want the herbs to dominate. Herbs are quite powerful and might mask the chocolate notes.

The raw chocolate and almond spread* is organic and only slightly sweetened. It’s just a mix of raw almonds, brazil nuts and cacao processed into butter along with some cold pressed hempseed oil and raw agave syrup. Despite the agave syrup, it works just fine in these chocolate falafels.

I normally cook my own chickpeas as, not only is it cheaper this way, but the quality is usually better too. However I didn’t have any dried chickpeas to hand, so I used two tins instead.

How To Make Chocolate Falafel

Chocolate falafel is slightly more involved than traditional falafel. But gosh, they’re worth that bit of extra effort.

Start off by frying the onion and garlic along with the cumin seeds. Then it’s pretty much a case of chucking everything in the food processor and pulsing until you get a mixture that’s mostly ground up and sticks together.

Grab a spoonful of the mixture and roll into a ping pong sized ball between the palms of your hands. Place on a plate and repeat until you have about twenty two to twenty four balls. I made twenty three.

Fry the falafel in a large pan over a medium high heat for three minutes. Flip over and fry for a further three minutes. Unless your pan is huge, you’ll need to do this in batches.

Once fried, place them on a nonstick, greased or lined baking tray and bake until crisp and golden.

What To Eat With Chocolate Falafel

You can eat chocolate falafel in just the same way that you do ordinary falafel. They’re delicious served with salad in a pita bread and drizzled with tahini sauce. That’s the traditional and possibly the best way to enjoy them. However, they make a fabulous lunch or supper served with just about any vegetable or salad side dishes you like.

I originally served them as the main course at my chocolate themed dinner party along with the following two dishes.

This mostly green salad has a tahini dressing and is adorned with a drizzle of chocolate balsamic vinegar. We hadn’t had much produce from the plot that year due to the inclement weather. However, the salad did include some of our baby beet leaves, radishes and garlic as well as some of our herbs and flowers.

This is one of my favourite halloumi dishes. You marinade vegetables in lemon zest and juice, garlic, sumac, chilli and olive oil, then roast along with the halloumi. I used Cornish asparagus, rhubarb, red peppers and onions this particular time. Shockingly, there was no chocolate present in this dish.

Thanks for visiting Tin and Thyme. If you make these savoury chocolate falafels, I’d love to hear about it in the comments below. And do please rate the recipe. Have you any top tips? Do share photos on social media too and use the hashtag #tinandthyme, so I can spot them.

If you’d like more Middle Eastern inspired recipes, follow the link and you’ll find I have quite a lot of them. All delicious and nutritious, of course.

Chocolate falafel are not in the least bit traditional, but they're really delicious. They're made with chocolate almond butter as well as chickpeas, so they have a nutty dimension as well as a chocolate one. Enjoy them for lunch or surprise family and friends with them as part of a Middle Eastern feast.
Prep Time25 mins
Cook Time25 mins
Total Time50 mins
Course: Lunch, Main Course
Cuisine: Egyptian, Middle Eastern
Keyword: almond butter, chickpeas, falafel
Servings: 23 falafel
Calories: 76kcal
Author: Choclette @ Tin and Thyme

This month’s #AlphaBakes letter is F and F is for Falafel. So my baked falafel go to Caroline of Caroline Makes and Ros of The More Than Occasional Baker.

Even though I’ve heavily adapted the recipe, I’m submitting these crispy bites of deliciousness to Jac’s Bookmarked Recipes. Mostly because my inspiration initially came from the Co-ops Share magazine.

I’m also submitting these chocolate falafel to My Legume Love Affair. This, as you have probably gathered, is a monthly event sharing any vegetarian recipes that include legumes. My falafel have chickpeas as the main ingredient, a highly popular legume. Aparna of My Diverse Kitchen in hosting this month. Oherwise Lisa of Lisa’s Kitchen or Susan of The Well Seasoned Cook hosts it.