Slathered in butter, a slice of this figgy bread roll is better than good. If you like fig rolls, you’ll love this bread. It’s a heady mixture of figs, almonds, honey and spices all rolled up in a cinnamon scented wholemeal spelt bread dough.

Dom has tasked us with randomly picking a bread recipe for this month’s Random Recipes. Since I’ve started baking the odd yeasty loaf or two as an aside to my regular rye sourdough, I was quite excited by this challenge. The recent success I had with bagels spurred me on and as soon as I found out what the challenge was, I started randomising immediately, then dashed off to the bakers to buy some yeast with a big smile on my face. I’ve started using fresh yeast again recently because I’m wary of the “improvers” listed in the ingredients of dried yeast.

As most of my cookbooks have a bread recipe or two in them, I decided to use Eat Your Books again to select my recipe from. Once I’d got my random number I simply counted down the list until I hit number 69 (of 88) and just hoped it wouldn’t be one of my books with no bread recipes to be found. It wasn’t. I picked Gaia’s Kitchen by Julia Ponsonby, one of my favourite vegetarian cookbooks. Despite the favour I have shown it over the years, evinced by its rather tatty appearance, I’d never made one of her bread recipes. I counted them out and she had six. Another random number gave me Figgy Bread Roll, which amazingly gave me the very recipe I’d been eyeing up AND there was absolutely no cheating involved.

Although Dom asked us to stick to the recipe religiously, I couldn’t do it – I had to get chocolate in after all. I did make the bread dough more or less as written, although I used wholemeal spelt flour rather than wholewheat. As for the filling, I changed that significantly. I had a Spanish fig and almond round that had somehow got pushed to the back of a cupboard a rather long time ago and was definitely in need of using. So I  forwent the use of the other dried fruits and nuts in the recipe and used the whole round instead. I was also keen to take this opportunity to use the dandelion honey I made recently.

The scent of sweet cinnamon wafting through the house as this loaf baked was indescribably good. The bread slathered with butter was better than good. It stayed sweetly and spicily scented for the several days it took to eat it. It was rather a large loaf.

If you think a figgy bread roll is all well and good, but really you just want good old-fashioned fig rolls, then head over to my recipe for the most scrummilicious fig rolls made with wholemeal spelt.

Thanks for visiting Tin and Thyme. If you make this figgy bread loaf, I’d love to hear about it in the comments below or via social media. Do share photos on social media too and use the hashtag #tinandthyme, so I can spot them. For more delicious and nutritious recipes, follow me on Twitter, Facebook, Instagram or Pinterest. 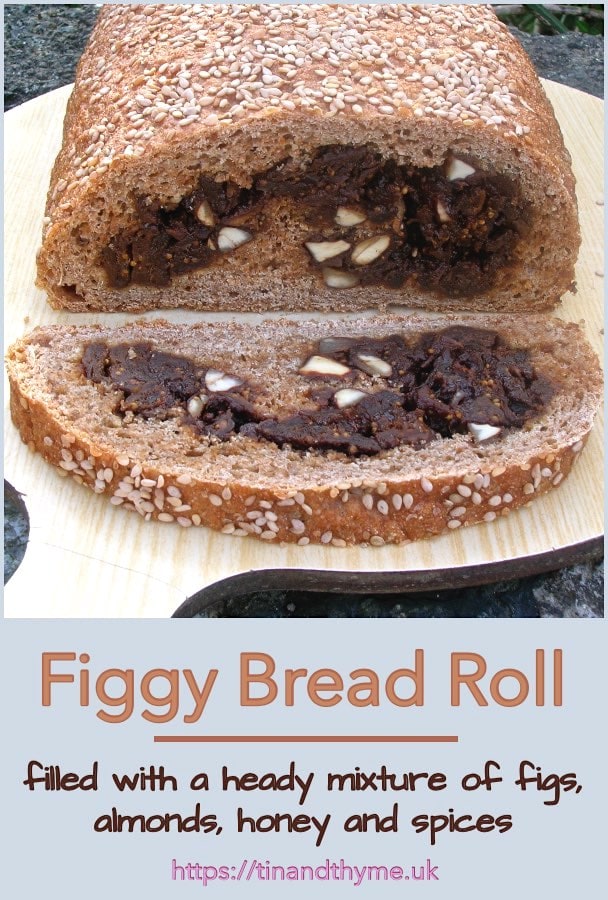 Thanks to Dom of Belleau Kitchen for this wonderful figgy bread roll. It was simple to make as it required virtually no kneading and was not only light in texture, but delicious too. Hooray for  Random Recipes.

This loaf entailed using up a very old fig almond round given as a present. It also included homemade dandelion honey rather than real honey and malt extract. So I’m submitting it to Credit Crunch Munch which is being guest hosted by Janice of Farmersgirl Kitchen.