If you like apple crumble, you’ll probably love this apple pudding with its crunchy ginger and choc chip oat topping. It’s really easy to make and is full of flavour. Serve with cream or custard for a comforting and satisfying dessert. 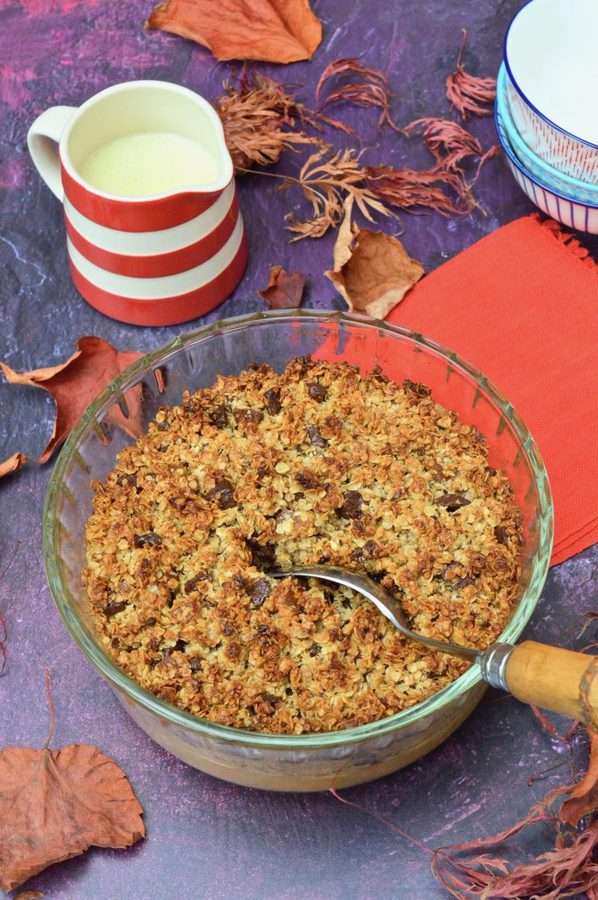 Well there’s a mouthful. I should probably have come up with a snappier name, but apple pudding with a ginger choc chip oat topping pretty much describes this lip smacking dessert. When I came up with it, I’d just made Karen’s Orange Liqueur, so I had a load of oranges minus their skin that needed using up fast. I also noticed at about the same time that some of the apples I’d been given a while before looked like they were in need of using too.

So an apple and orange pudding of some kind it had to be. Time being limited, a nice easy oaty one seemed to be in order.

Apple Pudding with a Crunchy Chocolate and Ginger Oat Topping

This apple pudding is comfort food at its best. It’s filling, tastes delicious and everyone will be clamouring for seconds. It’s probably at its best in autumn and winter, but as apples store well and are so easily available, it’s good at pretty much any time of the year.

One of the best things about it is that it’s a quick and easy to make dessert. Yes, it requires half an hour in the oven to cook, but the hands on preparation time is much less than for a crumble. The only bit that requires any time and effort is dealing with the apples. If you use windfalls, which I often do, it can be a bit of a pain as there’s usually quite a few bad bits to cut out.

To make the topping, all you have to do is melt butter and golden syrup, then stir in the oats, ginger and chocolate. In fact it’s very much like making flapjacks. Indeed the flavour of the topping is similar to flapjacks too. It’s nice and chewy with crunchy bits on the top. But it’s crumblier, not as dense and not nearly as sweet as a traditional flapjack.

I’ve made this apple pudding now, both with and without orange juice. The orange adds an extra dimension to the apples for sure, but with so much going on in the topping, it’s not really necessary.

Thanks for visiting Tin and Thyme. If you make this broccoli cauliflower cheese or the lime buttered corn, I’d love to hear about it in the comments below. And do please rate it. Have you any top tips? Do share photos on social media too and use the hashtag #tinandthyme, so I can spot them.

If you’d like even more pudding recipes, follow the link and you’ll find I have quite a lot of them. All delicious, of course.

Best eaten whilst still warm, with cream or custard.Please note: calories and other nutritional information are per serving. They’re approximate and will depend on exact ingredients used.

Thanks to Alpha Bakes for getting me to dig out this rather delicious pudding I’d completely forgotten about. I wanted to enter this month’s AlphaBakes and was hoping to make some A is for Almond macaroons. But time is running out and I’m currently on my way back from my cousin’s three day wedding in Wales. So I had a quick check through my drafts and found this A is for Apple pudding with a ginger and chocolate chip crunchy oat topping. AlphaBakes is hosted this month by Ros of The more than occasional baker and on alternate month’s by Caroline Makes.

As I had both apples and oranges in need of using up, I am entering this into the No Waste Food Challenge. The theme is fruit this month and it’s hosted by Turquoise Lemons.

And for much the same reason as above, I’m also entering this apple pudding into Credit Crunch Munch with Camilla of Fab Food 4 All.